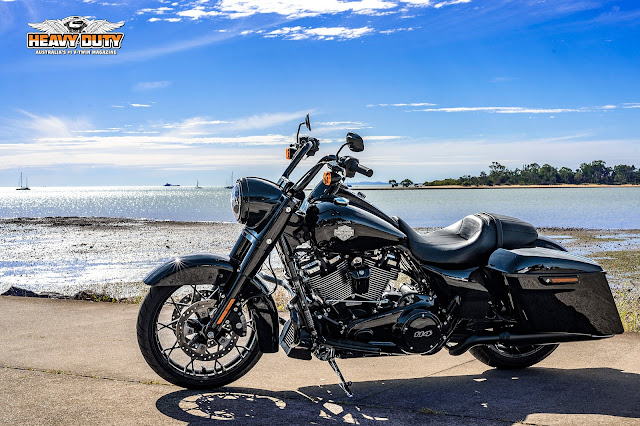 Our HEAVY DUTY Magazine 2022 Road King Special long-term test bike is now in our (my) possession and currently having its first outings in Brisbane.

Sunday dawned a bit chilly with a light overcast and high cloud, so I waited until mid-morning before setting off on my first ‘real’ ride on the Road King Special test bike.

I didn’t have any sort of plan as I left home, other than ‘go for a ride’.

I ended up heading south on the M1, considering the Gold Coast hinterland, but by the time I was approaching Beenleigh, the traffic was getting heavy and the flow started to slow, so I decided to do the southern Raby Bay loop, and took the Redland Bay exit.

On the freeway the 114-cube has an effortless lope. The bike is very comfortable, both ergonomically - and in the way it rides. It feels strong, solid, reliable and very stable.

The saddle is comfortable, although at 193cm I use all of it. The tallboy seat that we are planning on adding will take it to next level.

I thought initially that I would push the 9” mini-apes slightly forward, but after the time with them in standard position this afternoon, I don’t think I’ll bother. As is, they put the controls exactly where I like them.

A touring windscreen is part of our planned upgrades too. For a ride like todays, it wasn’t necessary. It was eminently comfortable nekkid. Particularly as by early afternoon the sun was out, and the temperature was nudging 20c on the coast.

On the Redland Bay Road I got a taste of open road riding and managed to gap the traffic for an uninterrupted run in the 90kph zone. Again, the bike was simply delightful. Effortless, comfortable and with a feel-good that had me grinning in my Arai like a loon.

That was helped over some of the broken pavement sections by having dialled in the correct rear suspension pre-load. I downloaded the owner’s manual from H-D online last night. That’s a great service if you don’t have a manual for your bike. All it needs is a log in account and a VIN. 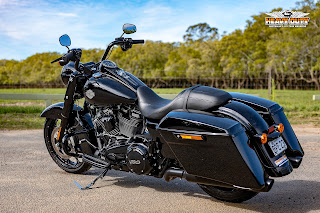 After a cruise around Redlands, I zig-zagged up the coast, heading inland before another photo stop and cruise around Victoria Point and the same at Cleveland, before heading back out to the M1.

By the time I got to my normal exit ramp I was simply not ready to stop riding, this is a ‘take the long way home’ motorcycle of the highest order.

I continued north and took the Port of Brisbane Freeway and looped home via the Wynnum-Manly foreshore - and that leisurely boulevard cruise. The bike works well as a cruiser too. It’s a head turner and very well mannered at 50kph.

I got back to base very, very happy. By the time I faffed around with cameras and looking for locations I was away a bit over 3.5 hours, did 120km and enjoyed every minute of it.

This is a most satisfying motorcycle.