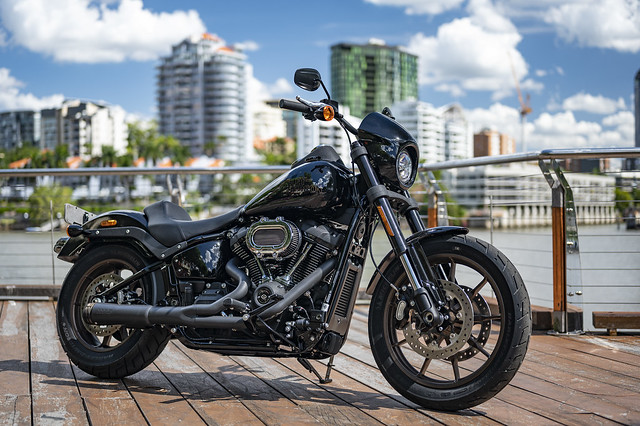 I was loitering around the Morgan & Wacker showroom waiting to pick up a test bike when the Dealer Principal dangled that titbit. “Do tell?”

“How does a 153 Horsepower Low Rider S sound to you?” continued Lee Negus, their Customer Service Manager who had just walked out of his office.

“Mighty fine” I grinned, “Like I said when I returned the stock Low Rider S Press Bike a few months ago, I can’t wait to see what some of you guys will do with this platform.”

And here it was, that wish had come to fruition.

Back in issue #167 of HEAVY DUTY I was pretty effusive about the newest Low Rider S. I really rated its sporty handling courtesy of the inverted cartridge forks, solid new Softail chassis and mid controls and ergos. Plus, I really liked the mean looks of the machine. The 114 Cube M8 pushed it along very rewardingly too.

I said it then and I’ll reiterate now, it’s simply a better bike than the Dyna version: more power, less vibration, better handling and comparable looks. Then there’s the ease of squeezing more power from the engine at much lower costs - to wit: “Well, we’ve just now finished the build and the dyno tune so we can put a trade plate on it and you can take it for a spin if you like.” Paul offered.

“Would I like! Does Dolly Parton sleep on her back?”

So, while the plate was being affixed and the fuel tank topped up, I sat down with Lee to get this Low Rider’s low down.

My first question was, “What was the goal with this build?”

“Well, Harley has just released the 131 cubic inch kits and we wanted to see how far we could go with one using as many genuine H-D components as possible. We also wanted to see how it stacked up against the S&S 128 cube. So, Luke, our Service Manager and Glen, our Tech started putting a plan together.

We got a 131 piston kit – genuine Harley, we got a 131 barrel kit - genuine Harley, and just sort-of went from there. We used a lot of components that are in the Screamin’ Eagle catalogue right now, like the throttle body with the CNC manifold, which we ported and polished to suit the heads.

We used genuine injectors, genuine pushrods and the new heavy breather that you will see on the bike. That’s also now available in black but the stock hadn’t landed when we were building it, but that breather is an important part of how it made the numbers.

Another important factor in the performance of this build is that we’ve started building our own heads in-house. That offers our customers a much quicker turn-around and the results speak for themselves.

Glen ordered AV&V valve guides, springs, studs and everything else we usually get from Rams, all together, and then he ported and polished the heads to match the manifold - again, this was all done in-house and it’s a big part of how we got so much ‘squirt’ out of the engine.

We also used Feuling short travel race lifters with a 544 Rocket cam and that helped a lot too.

From there it was a matter of finding the best exhaust system. We tried several systems on the dyno but found the best performance overall was from the Supertrap with open ends. Some of the exhausts we tried were producing 17 horsepower less than the Supertrap that is on it now.

What we were able to achieve with the TTS tuner and that pipe is outstanding. As I said the results speak for themselves, it’s producing 153 horsepower and 150 ft lbs of torque and you can’t argue with that! And another thing to remember is that our Dyno is brand new and it reads accurately, and it isn’t giving exaggerated figures - they are the genuine numbers.” Lee said emphatically.

“Have you done any work to the chassis or suspension?” I asked.

“No, it’s all stock, you’ve ridden the Low Rider S - it’s all premium anyway. It’s got a wicked front end, great brakes and there wasn’t anything we felt we needed to do.”

“What about the clutch?” I ventured.

“It has a basic stock clutch, and it handles it easily, but in the end, it would depend on how the customer was going to ride the bike. If it was someone that was really going to wring its neck, then we’d upgrade the clutch and maybe add an S&S oil pump and cam plate, there’s plenty of other things we could do if someone was really planning to ‘ride the shite’ out of it, but really the combinations that are in it now are quite bulletproof as we’ve found out with many of our previous power builds.”

At which stage Paul came back handed me the key fob and said, “It’s ready to go”.

The first thing I noticed as I pulled out of the yard and headed into the city was just how normally at low speed the bike behaved. Some of the older, big horsepower twin cam builds we’ve tested have felt like they fired at every second telegraph pole, and had a hair trigger, but this unit is tractable and quite well-mannered around town … until I got to the M1 on ramp, on then … oooh baby! Twist and hang on tight. The power delivery is very linear and showed no sign of dropping off - until I pillowed as the disqualification zone beckoned. From low down in the rev range it pulls and pulls and is very potent, strong and quite exhilarating. 153 ponies worth.

Marry that with all the niceties of handling, brakes and cornering that the Low Rider S affords and it makes for a real sports-bike-like Harley-Davidson.

And Lee was right, even the exhaust system sounded great without rattling the windows in the next suburb. It is quite loud, but rich and throaty with being too anti-social.

I returned the bike with a huge grin on my face and asked the next obvious question, “How much?”

If you start with a Stage 1, 114 Cube Low Rider S the extra components and labour add up to around $9,550 installed and the H-D limited warranty stays intact on the Genuine components.

For that you get a simply superb motorcycle. If you are looking for a real high performance, genuine H-D, contact Morgan & Wacker Brisbane for more info.