My first ride on a Wide Glide for KR was back on the early noughties.

It was a cruise around Auckland to produce a KR Quick Spin article, but I enjoyed it enough to be still quite memorable over 10 years later. 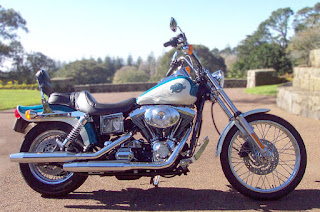 I do recall that the trademark front forks were rather springy and the gearbox was somewhat agricultural. It needed quite a heft at times and produced a healthy clunk on change downs.

It was difficult to select neutral when stationary too.

But the cruise-ability of the old 88 cube twin cam made up for those shortcomings, and I lapped it up. It was a feel-good bike.

Harley states that the FXDWG Wide Glide was deigned by Willy G. Davidson in 1980 as his homage to the choppers of the 60’s.

Aesthetically, the ’02 model was closer to that heritage, with its ducktail rear, mini ape-hangers and shotgun exhausts.

Those features are all gone from the ’14 offering.  Replaced by a more Spartan, ‘chopped’ rear end, flat drag bars on 3” risers and a reasonably quiet ‘Tommy Gun’ exhaust.

Gone too is any hint of vagueness in the road manners and the new gearbox is as crisp and ‘metric’ as any I’ve used on a 1700cc motorcycle – you can even select neutral with the engine off. 2002 was how long ago??

Willie’s styling is still low and long, with the model’s wide and well-raked front end featuring prominently in the presentation.

Other aesthetic changes for 2014 are the headlight surround is now blacked, so too are the wheel rims and the narrow Street Bob fuel tank has been tilted up slightly.

It still has a line that is pleasing to the eye - and who doesn’t like flames! Standard!

I spent a lot of time riding around looking for backdrops that would show them off.

The search meant quite a few tank-fulls in a variety of urban conditions. Freeways, main roads and some industrial back-blocks, as a well as a few out of town jaunts to the hills. It was all very enjoyable.

The bike is all ‘capital C’ Cruiser. It handles, tracks and steers better than the 36 degree fork angle and 21” front wheel would have you think. It’s stable and tracks very well. It won’t change lines unless you tell it to.

The only allowance it needs in the course of normal riding is for the cornering clearance on the exhaust side. It is limited. Harley claims 28.4 degrees of ‘tippage’ is available. 31.9 degrees on the primary drive side.

This isn’t your bike if a daily diet of hard-out twisties is on the menu.

If you are doing a lot of Freeway and State Highway, it’s a delight. Sit back, stretch your legs, get comfortable and let the torquey 103 cube push you along in fine style.

Harley have rolled the 103 Twin Cam out across the entire range, with the exception of the Sportster series.

The ‘Widey’ now has a displacement of 1690cc with a 98.4mm x 111.1mm bore and stroke, running 9.6:1 compression and Pushrod-operated, overhead valves
with hydraulic, self-adjusting lifters; two valves per cylinder. All fed by Electronic sequential port fuel injection.

The fueling is the same as all the Harley EFI in the last 5 years – it works so well I forgot to notice it.

But the extra cubes are exactly what the Dyna series needed as an upgrade however.

The bikes are relatively light (in H-D world), at 295 kg dry. The big torque of the larger engine gives the bike quite good ‘poke’. Accelerating away from the lights and maintaining cruising speeds are equally pleasant.

There is more vibration at the footpeg than from the similarly rubber mounted engines of the touring range, though I have to admit that when I noticed the vibes it was usually because I was running a gear lower than I needed to be – until I got the mojo. Top gear at 60kph is quite viable.

Then when the penny dropped it was two weeks of riding around in Grins-ville.

My long legs forced me a bit further back in the saddle than I’d like, but average height riders, and particularly those built closer to the ground, will appreciate the 680mm saddle height. Combined with the drag bars and risers it makes for a very comfortable perch.

Braking is also quite comfortable. For the most part I only used one finger to operate the 4 pot, single disc front stopper. Occasional yellow lights took two fingers, but that’s all. I didn’t get into any emergency braking situations other than grabbing a big handful in a car park to engage the ABS on purpose. Like the rest of the motorcycle Harley’s system has become more refined with every model year.

That’s the word I was looking for. ‘Refined’.

Those 60’s hard tails and ‘wild childs’ were anything but refined. Through to 2002 the Wide Glide had improved constantly.

Over time it’s been in and out of the lineup, till here we are, several models in to the current shape, with 103 cubes, self cancelling indicators and a good deal of modern high tech, concealed under old school styling, on a bike that just made me feel good riding it.

Wide and quite ‘fat’.