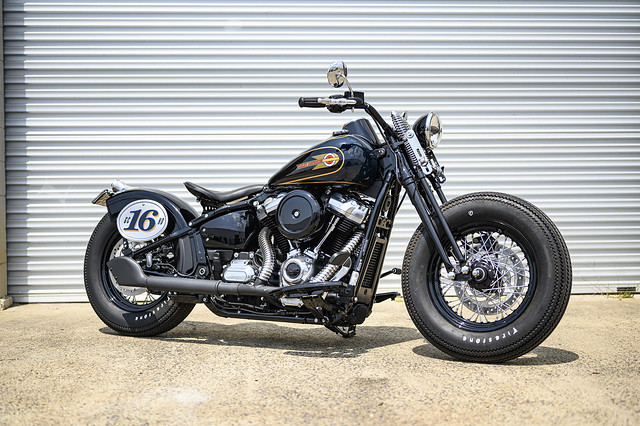 Gold Coast Harley-Davidson’s ‘Battle of the Kings’ winning bike, the ‘Holister Riot’ delivers old school a feel-good in keeping with the historical event that spawned its name.

The ‘Hollister Riot’ or ‘Hollister Invasion’ occurred at the Gypsy Tour motorcycle rally in Hollister, California from July 3-6, 1947.

Many more motorcyclists than were expected flooded into the small town to attend rallies and racing as well as to socialise and drink. Subsequently a few of the motorcyclists caused “a commotion” in the town.

The incident was sensationalised by the press with reports of bikers “causing pandemonium” and was characterised with a photo of a drunken man sitting on a motorcycle published in Life magazine.

The Hollister riot helped to give rise to the outlaw biker image, however the articles that were written about the riot may have been greatly exaggerated and sensationalised beyond the actual events. Eyewitnesses were quoted as saying, "It's just one hell of a mess" but that, “the motorcyclists weren't doing anything bad, just riding up and down whooping and hollering; not really doing any harm at all”.

“Whooping and Hollering” is exactly what I felt like doing while riding the ‘Riot’ around the quiet streets of Nerang on a sunny Wednesday Morning.

The way the bike resembles the Pan Head in the famous photo is absolutely fantastic and no-doubt enhances the real joy of being aboard.

It started life as a 2019 Softail Slim when Dealer Principal Steve Shilling and his crew of Builder Matt Valentine, Workshop Manager Jack Baugh with Parts and accessories specialist Nick Agius, set about the task of paying homage to 1947.

The look starts at the front end with a Meatballs 20” Early Springer assembly, Custom made front wheel spacers, Meatballs Top Clamp, Modified Meatballs Handlebars and a JP Cycles Springer Pre-load adjustor. The big chrome springs projecting out from behind, and rising above, the Twin Cam Breakout Headlight look entirely period-authentic.

The clean lines were further maintained by including Rollies Speed Shop under perch indicators that are virtually invisible till you turn them on. Genuine Nostalgia Grips
And Magnum Shielding brake lines rounding out the look. A Genuine Steering head bearing kit was also included.

A Performance Machine front brake calliper & mount was fitted while the wheels are the original Slim’s, but they have been shod with Firestone Deluxe 500x16 bias ply tyres front and rear that look almost identical to the 1947 machine’s rubber.

Performance-wise the 107 Cube engine is stock, apart from the Maximus Tuner, which suits the road manners of the build perfectly, although it has been fitted with a handmade Original style Panhead muffler and Custom Header pipes with original ripple pipe heat shields - that also fit the look seamlessly. It sounds great without being too loud or raucous. It has a Genuine Kahuna timer cover, Genuine chrome coil cover and a Genuine Black Derby Cover to round off the old-school appearance.

The presentation is finished off in a period colour Billiard Blue and Black paintwork and a hand painted number board, all by Mark Walker from QMPP. According to Steve, “The number board was fitted to break up the black at the rear of the bike. We picked number 16 as a reference to Jimmy Chan, who was a 3-time winner of the Springfield Mile, the
first being in 1947 on a Harley-Davidson Springer Model.”

Back out on the Gold Coast Highway I was happily cruising along on one of the best feel-good Harley-Davidsons I have ridden in a long time. ‘Riding’ is the operative word too. This bike takes more all-round effort than a stock unit. It needs more body English, partly due to the flat profile of the tyres, and partly due to the manner of the Springer front end. There’s nothing untoward, it just needs a bit more push and pull than a standard new Softail.

With the single pot, single disc up front it needs both front and rear brakes to be used in concert, while the lowering kit and firm saddle mean it’s better to ride around lumps and bumps rather than let the suspension absorb them, but once you get the mojo it’s seriously good fun, old school, big grin, feel-good fun.

That said, the wide bars, large saddle and big footboards do make for one of the more comfortable riding positions on a Harley - particularly for a big guy. I could sit comfortably on this one all day.

So it was with real regret that I returned the ‘Hollister Riot’ back to the dealership. As Steve noted when I returned, raving about the ride, “Our goal was to create a modern motorcycle with an old school look and feel.”

At the time of writing the bike is still for sale at $45,000 ride away, or if you have a Softail Slim in your garage and would like to turn back time, Gold Coast Harley-Davidson can re-build yours for somewhere between $13,000 to $16,000 depending on what options you choose.