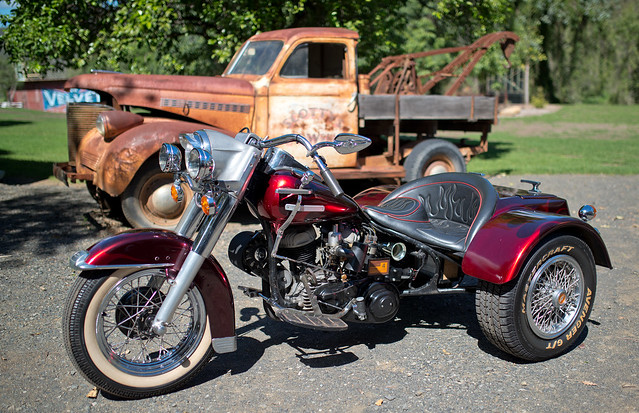 We met Robert Green out at Scotty’s Garage near Toowoomba and he mentioned he had a genuine 1971 Harley-Davidson Servi-car - so a while layer we sat down to get the full story.

Robert bought the bike in Bundaberg Qld back in 2008 and is its third owner, “The gentleman I bought it off had owned it for 14 years and the owner before him had it for about 15 years. It has seen quite a few bike shows and used to be black with Ape Hangers.” he began.

The previous owner had re-painted it and Robert has made several improvements in the time he’s owned it. He added the rear mag wheels, taillights and the big one-and-one-eighth inch SU Carburettor, “Which is off an old Morris! It originally had a twin carb setup which didn’t really suit the engine, so I upgraded it and added some drag pipes. I’ve also made heaps of cosmetic changes over time, like the skill gear knob and other improvements.”

It’s turned this example into a unique Hot-Rod Trike - far removed from the original build.

During it’s long history the trike’s large cargo box has been replaced with a padded pillion ‘lounge’ and boot and the whole rear end bodywork has been remodelled.

The first Servi-car was designed during the Great Depression in an effort to increase sales and it was targeted squarely at the automotive service industry. It was designed to be towed behind a car being be delivered to a customer - so it came fitted with a large towing assembly and tow hook fitted to the front axle. The Trike was attached to the customer’s rear bumper bar, then when the car was delivered to its destination the driver would unhitch the Servi-Car and ride it back to the garage or dealership. They could also carry tools for servicing vehicles and other machinery in the large trunk - so in addition to its intended use for car delivery and retrieval, the Servi-Car was also popular as a utility vehicle for small businesses and mobile vendors. It proved to be particularly popular with the US police departments too, some of which still used Servi-Cars into the 1990s. This example possibly saw time with the LA Police Department but its origins are uncertain.

Robert says, “It’s not too hard to ride, obviously it takes a bit more effort than a two-wheeled bike, but for the speeds it’s capable of, it’s very competent.”

It has a three-speed gearbox, suicide shift and mechanical reverse gear. “It’s the same as the World War Two WLA Harleys, in fact the engine pre-dates the WLAs - it was used in the Servi-cars first. Interestingly, in the WLAs they put in a spacer where the reverse sits. Although some of the side car versions did have reverse.” Robert noted.

“It’s actually Harley’s longest engine production run - they made this engine for 45 years, from the 30’s until they stopped production in 1974. As such it’s a very basic unit and very easy to service and maintain. Set the points and change the oil and there’s not much else that needs doing to keep it running.”

The Trike has been on some ‘interesting’ rides, “Probably the most interesting was riding it back home from Childers when I collected it. I bought it sight-unseen and the previous owner registered it and fitted new car tyres for me to pick it up. I spent a lot of the ride just trying to keep the thing on the road. It wasn’t till I got home and did some research to find out that the recommended rear tyre pressure is 16psi – rather than the 32psi that the garage had inflated them to. It was wild to say the least on that rigid rear end! Originally the bike would have had a sprung saddle, same as the WLA, to soak up some of the bumps and the front has telescopic forks.

On the Servi-car the front end is the same as fitted to the equivalent years Big twin. Mine is the same as an Electra-glide. It has the original hub and spokes but it’s got a wider 4-inch rim now.”

Robert has mulled over making changes to the bike and reverting it back to a more stock format – or even considered selling the bike a few times, “But then every time I ride it I can’t bring myself to do it. I just enjoy it so much. What I would probably like to do is fit some wider wheels on the back – the guards will allow up to 8-inch – but for now I’ll just keep on riding it – and enjoying it.”