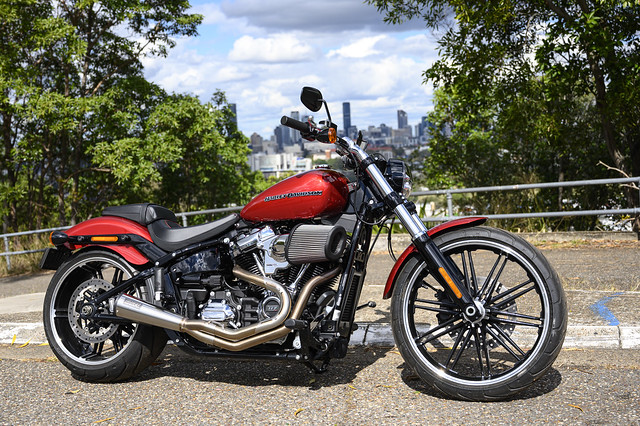 As several Heavy Duty bike tests have begun previously, this one kicked off with a call from John Newstead at M&W that went something like, “Dave, we’ve just built a bike that you need to ride. It’s a Breakout and it’s rather special, come and take it for a spin.”

A few days later I was taking some photos of John riding it and then got to borrow it for the weekend. And some weekend it turned out to be! The short story is that this 2019 Breakout produces 142.65 horsepower, 145.68ft.lbs of torque and one huge adrenalin rush when you crank the throttle. It goes from ‘go’ to ‘whaoaaaaaaa!’ in a heartbeat. Instant, linear, shredding, surging, addictive grunt. And because the big power is delivered from a large capacity V-Twin it has that characteristic lowdown torque surge that is missing from a similarly powerful multi-cylinder engine.

It’s unique – and it’s producing numbers in excess of what we’ve seen from some boosted Twin Cams – with turbos or superchargers and even surpasses some of the really Big Block motors.

It’s a normally-aspirated muscle cruiser that truly deserves the massive 240 section rear tyre in the name of ‘getting all that power to the ground’. The fact that it’s all slung in the new M8 Breakout chassis, with its inherent tidy handling, great comfort, sweet brakes and good looks adds even more to the bike’s appeal. I sat down with the Dealer Principle, Paul Lewis, to get the details.

“Really Dave, the great news is the breathing capacity of the Milwaukee 8 engine and the 4-valve head. We found the Twin Cams good, but you really had to spend a lot of money to get them to this level of performance. With the single cam it’s a much simpler modification to install a high-lift profile and get those ‘four big holes’ in the heads sucking in and exhaling a lot of air.” Paul began. “We’ve found that small modifications to these engines can have a huge impact of their output.

We’re getting more power out of the 117-cube than some of the very large capacity older-style engines.” “The Milwaukee 8 means we can get a variety of different lifts via the camshaft, combine that with the right induction and the right exhaust, and the new motor is capable of producing really big numbers. At the end of the day that’s all it is though a number for calibration and while we understand that some people like to use their Dyno numbers for ‘bar races’ at the pub, we like to say that some Dynos are calibrated in Draught Horses and some Dynos measure Shetland Ponies. Our new Dyno is calibrated for accuracy – and the important thing is tuning to make sure the bike is still rideable – while delivering big horsepower.

Our specialists, Luke Spence, Glen Riley and the team have made sure that this Breakout certainly is that.” “And that’s what we built this bike for – it’s a Performance Demonstrator, to show exactly what we can do with the Milwaukee 8 engine. We started with a 114-cube Breakout and tried to use as many genuine Harley components as possible. We used a specific mix of cam and injectors with cylinder heads machined to our specifications by Rams Headworks in Sydney. That included oversized valves and a full port and polish. But really, the performance parts inventory on the bike is quite thorough and extensive.” At which stage Paul handed me the two-page list of components used and the worksheet to complete the project. Here’s what you need to extract over 140 horsepower and nearly 200Nm from a Milwaukee 8 engine… Start with 4.075 big bore cylinders and 4½in stroke high compression pistons, then add Feuling lifters, Screamin’ Eagle adjustable pushrods and a S&S 550 camshaft.

A TTS Mastertune Delphi EFIUF tuner, “Which allowed us to unlock a few more horses from the engine’s ECU,” was also included. Then add a Screamin’ Eagle Tuneable Air Intake kit with Extreme Air Ventilator, a High Flow 5.5gal/ sec Fuel Injector kit and SE Performance spark plugs. Originally the bike was fitted with Vance & Hines Big Radius exhausts, but they were replaced with a V&H upswept stainless steel system that yielded an extra 17 horses. Then some cosmetic touches were added: The Medallion Airbox insert and a CVR Chrome Kit, 117 Timer Cover and then there’s all the gaskets, clamps and hardware need to complete the physical build.

From there the bike went to Glen and the Morgan & Wacker dyno room. “It needed a thorough run to suit its new configuration. It was on the dyno for three hours and was meticulously fine-tuned to achieve its current figures,” he said. Which all leads back to me sitting on the bike near the Freeway On-Ramp, waiting for a clear go, and ‘just one more’ highly addictive 0-100kph fun-run. The only problem is that they only last a few seconds. But there’s always another one.

Then, when you are out on the freeway, top gear roll-on is quite joyous and the growl of 140 untamed horses under you is pretty special. There are some trade-offs in having such a wild and fast ride.

In normal conditions and traffic it needs two, or maybe three gears lower than normal to stop the lumpy cam-equipped motor from hunting. It needs revs. It’s also loud! The V&H system is very loud, while the bike’s fuel consumption is up and the tank’s range has been reduced markedly – but all that is as you would expect from a Harley cruiser that will give the sports bikes a real surprise off the line. How Much? If you have a motorcycle with a 114-cube Milwaukee 8 engine a similarly-full inventory of parts, labour and dyno tuning comes with a turn-key price of $10,109. For that, Morgan & Wacker have built a FXBRS that is fast, furious and huge fun. At the time of writing the bike is still for sale at their Newstead Showrooms and because it was built as a demo bike it does offer some savings.

This bike plus build cost is around $43,000 in total but it’s on the floor at $39,999. Contact Morgan & Wacker for details, or better still see if you can wrangle a test ride. But hang on!