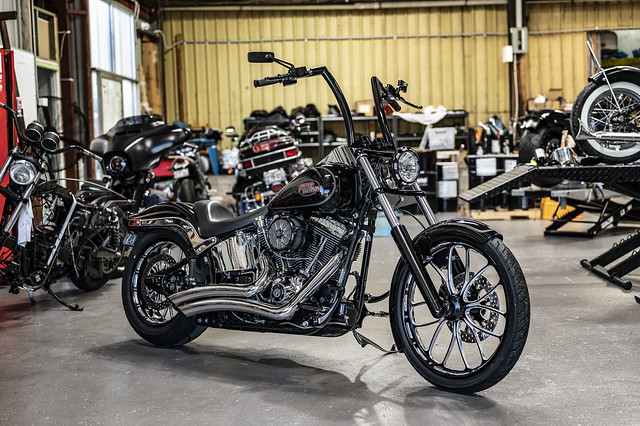 
The HEAVY DUTY road to Zane’s excellent Softail Custom started with a call from famed handlebar manufacturer Burleigh Bars. They tipped us off about a build by Farrow’s Customs on the Sunshine Coast that, “Features some ‘bar work’ that you will be interested in.”

Who isn’t interested in bar work? So, a few days later I was sitting in the Farrows shed at Nambour with Zane, the bike’s owner, and Dane Hobby, the mechanic responsible for the works.

Dane stared the chat, “We began our part of the build with the handlebars. Zane wanted them internally cabled, but I don’t think that has ever been done before with this diameter handlebar, so it was a bit of a challenge, but they came out really well.

They are inch-and-a-half Burleigh Highballs. The was a lot of back and forth getting the Goodrich brake lines to work, it took 3 days all up, around 30 hours, and there was a lot of machining involved, we had to cut the back off the bars off and make an internal belt for the cable throttle, tap threads and heaps of fiddly work. We also routed the brake lines with a right angle straight into the bar adjacent the master cylinder and tidied up with it grommets. It looks great – and so clean. We also did some maintenance work for Zane on the clutch and gearbox.”

The finished product looks simply outstanding, with no lines or cables taking away from the classic chopper look of the Custom.

Zane took over the story, “The bike is a 2007 Softail Custom, it was 100% stock standard and it basically went straight into the workshop. 2 weeks after I bought it, I was pulling it to pieces and diving my wife nuts over it already!

The first thing I did was put a ‘Performance One’ three-degree rake triple tree and two-inch-over tubes in it, but that badly affected the handling, so I immediately went back to standard fork tubes and that pulled it in a lot tighter, made it lower and it looked a lot better.

I then went through a variety of handlebars; flat bars, drag bars, pull back bars, until we ended up with the bars that are on it now.

Then I started gradually installing the Performance Machine components: Heathen contrast cut wheels with matching pulley and disc rotors. Then I added the air cleaner, clutch cover, derby cover, scalloped horn, switch gear, grips, and the forward controls. They are all Performance Machine. So are the 6-pot front and 4-pot rear brake callipers.”

And they look fantastic. They way they enhance the lines of the bike is superb.

“The exhaust system is by Python”, he continued, “The reason I went with their system is because the side slash at the end of the pipes runs at the same angle as the swing arm, so it all just looks really tidy being on the same line. Some of the other systems have that big scalloped cut out in them, but the Python lines up perfectly for a Softail. They give it a pretty nice note too.”

It’s a perfect example of the kind of planning, design and good taste that has gone into this build.

“It was a standard 96 cube engine to begin with, so we started with some performance work. We put a Screamin’ Eagle 103 kit in and added CNC machined, ported and polished the heads. We haven’t put the bike on a dyno, but from riding my other bikes that have (been Dyno’d), I’d say this one is running out around 105 horsepower … and it really works for a daily rider. And that’s 100% what this bike is ¬- a nice daily rider, it’s not a show bike by any means, it gets ridden and regularly covered in dirt and mud and needs a wash before I take it for another run!

The prominent oil pressure gauge is by Drag Specialities as is the solo seat and it’s running a Screamin’ Eagle race tuner. It also has a heavier clutch springs fitted.

“And that’s just about if for the performance upgrades. Then we started on the finishing touches,” Zane continued. “We fitted LED lighting, the rear lights and indicators are all by Alloy Art. Then we fitted some custom front indicators that are really cool. They are rings that sit just under the triple clamps and help with the clean and uncluttered look of the front end. They are super cool.

The front guard is by Klockworks and it has Arlen Ness hot legs for lowers to finish off the clean line of the front end.”

“Absolutely stock. It’s got scratches and love all over it” he smiles, “It’s a rider. I didn’t want to change the black at all. It’s got that FXSTC logo on there and that’s just perfect.”

I though that was a pretty good summary of the bike. It really is close to a perfect execution of a daily rider Softail custom. It’s stylish, has a great uncluttered line, and still remains very ride-able and practical.

“Anything else we should mention?” I asked.

“Yep a big thanks to Bryan here at Farrow’s. What a dude. Just for anyone that comes in here, they are all so down-to-earth and the best people to do business with. I can’t recommend them highly enough. 100%”

Then right on cue, business owner Bryan Farrow walked into the office and I asked him for his take on the bike.

“Zane had already done a lot of the customising work on the bike when it came to Farrow’s, but the goal was to tidy up the handlebars and give it a really clean and tidy look by cabling everything internally. Electricals and hydraulic lines. It was a real challenge, but Dane did a fabulous job and you can see that the results speak for themselves. We’re quite proud of the results.”

And so they all should be. For a daily rider it’s a daily Classic.

It’s an interesting thing, interviewing people for HEAVY DUTY. Sometimes the folk I talk to have less than … well … ‘complimentary’ things to say about other people in competing businesses.

That’s definitely not the case with Farrow’s Customs. Everybody, from Industry types and Dealer Principals to past customers has had nothing but a good word to say about the Nambour based workshop.

I asked Bryan Farrow for their story.

“How long have you got?” he answered with a grin.

“I worked for the Bar and Shield for eight years as a Qualified Harley Tech, did all that, and then took a few years off, travelled and came back with a different mindset, but I didn’t have a job to go to.

So, my ‘Old Man’ had some room out the back and he let me start up the business, very small time. I was literally sweeping the floor when I bloke came in on a Harley and said ‘Your Old Man said you are working on Harleys’.

I said ‘Yeah!’ and on day one I booked in a job and it all started from there. Now five years later we have six staff and a growing business. We offer a full range of services, everything from tyres, service, full customisation and heaps of motors. Now we average about four to five sets of cams per week, as well as transmission services.

We are specialising a bit in the club-style scene, Sportsters, Flat Trackers and performance motor upgrades - but we’re not limited to just that. We’ve also got a stunt riding team and specialise in that style of bike too, but again, as you can see with the work we’ve done on Zane’s bike we’re not limited to any specific type of build.

The important thing for us is to work out a plan to build the right bike for our customer -especially when we are talking motors. We design to suit individual riding styles and bikes that deliver the best results for every individual.”

If you’d like to find out more about Farrow’s Customs visit their web site www.farrowscustoms.com.au

It’s a real success story in the making.