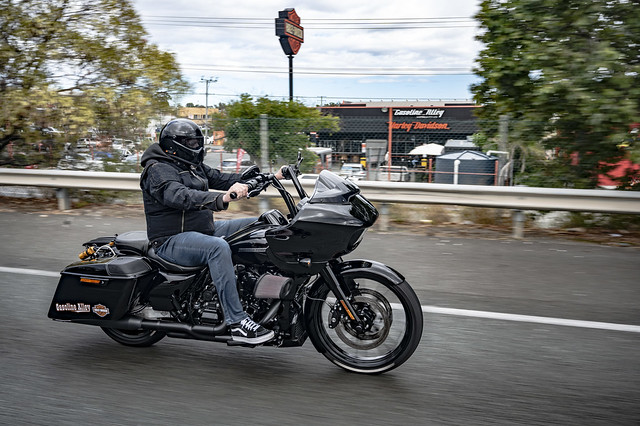 Not So Simply the Best.

Dave takes on a Bagger that stands out from the rest.

“Our latest build started as a new ’20 Model Road Glide Special. We transplanted a few bits from our old shop bike and added a few new bits as well,” Gasoline Alley Dealer Principal, Rob Keuning began with something of a huge understatement.

We were sitting in his office, just off the dealership showroom floor, after I got the call from his business partner, Fergus Bell to come in and check a bike out for HEAVY DUTY.

Fergus’ call went along the lines of “We’ve got this great build, but the owner is a bit cranky.” It wasn’t till I arrived, not really knowing what to expect, that I discovered the joke was on me and it was actually his Business Partner’s shop bike.

Just how huge Rob’s understatement was becoming very obvious after I was lucky enough to score a ride on the black ‘beauty’ shortly after.

But first we got down to some specifics. Up front it’s running a Metal Artopia
23” front wheel, Hawg Halters six degree triple trees and 14” Arlen Ness Brake rotors.

“We were originally running a 21” wheel, but we started experimenting with the 23” to find out where the rideable limit is.” Rob said with a laugh.

“But it’s really good. It’s a really tall bike because we’re running 13” Ohlins, which are 1” longer than standard, on the rear as well. So it tips into the corners with more ground clearance. It does feel different, but we are definitely not past the limit of rideability. It’s a very, very rideable bike. We’ve actually improved the handling immensely.”

That was very evident on the subsequent test ride. I took the bike up the service road from Gas Alley to the M1 on ramp and the tight 180-degree corner that leads on to Motorway entry, heading north.

I was giving it ‘a bit’ and tipped it in hard, expecting the ‘skri-i-itch’ of the usual folding footboard scrape any second - and none was forthcoming. I tipped harder and still no contact, so I gassed it and tipped it over even harder and still nothing made any contact. Again, Rob had understated it, the bike has outstanding cornering clearance and a very predictable, solid, confidence inspiring feel and handling. The whole front-end geometry package is very well sorted.

“I think we’re on the edge” Rob continued, “If we go any bigger or increase the wheelbase any more it will be detrimental, but as it is, we’re right on it.”

Which brought us to the engine.

“It’s a new 131 Cubic Inch Screamin’ Eagle crate motor. We ran it in as-standard, straight out of the box, and then added a cam upgrade with a Red Shift 548 Cam and new valve springs, which shifted the power further up the rev range but gave more torque down low. That torque kicks in 500rpm sooner - which is exactly what we were looking for. That is all we have done to the motor so far. We really want to see this motor’s potential set by step.”

Currently it’s putting out 134 horsepower and 145 ft lbs of torque. “And we’re happy with those numbers. We need the bike to be a daily rider. I ride that bike to and from work every day. It’s the bike I’ll ride to Sydney or Melbourne and it’s got to be good in the traffic on hot Brisbane days as well - and it currently does all that. It’s also a bike I can take out to the track and give it a ‘fang’ around Willowbank as well.”

That too was evident on the test ride. On the on-ramp I opened up the throttle and it is quite glorious. The torque does indeed kick in lower, but there’s no need to short-shift at all as the big cubes are very adequately fed by the Maximus Tuner with all H-D Delphi EFI, SE Extreme Heavy Breather and Fuel Moto XXX exhaust system with Jackpot ceramic coated headers and  Hi-Roller slip on mufflers. It all means that the power delivery is very linear and plateaus around 5700rpm - and it doesn’t really drop off till it hits 6250, or well past ‘too fast for the possibility of cops around’.

It’s running a standard clutch and gearbox, “These new M8 clutches are bulletproof, there’s no need to upgrade.” Rob continued. “But we have added some bodywork and other upgrades. It has CVO fairing lowers, a Stage 3 ‘Boom’ audio system, 14” Burleigh bars, and we’re running Oberon Performance adjustable levers, that I didn’t think I would ever do on a Harley, but they are fantastic.

It’s also running a CVO style seat which gives it a very low saddle height. The seat compensates for the taller Ohlins (that have Big Bear remote reservoir holders) and the big wheel – as well as the 18-inch Knockout wheel on the rear”

By the time I got to the end of the on-ramp and started motoring north on the M1 the comfort of the bike was also very apparent. The saddle is sublime, the bars are perfect and so as is the mini windscreen fitted to the Shark fairing with no buffeting at all!

It is the most comfortable ergonomic for a big guy of any I’ve ridden.

Also very comfortable are the bike’s Freeway manners. The big wheel aids its stability, so do the state of the art shocks in concert with the front-end suspension package designed and installed by ‘Suspension Improvements’ in Springwood.

They have installed Progressive springs and Race Tech emulators that add to the handling package superbly. So too does the full custom, aluminium box section Swingarm from Track Dynamics - which is a beautiful piece of fabrication.

After a jaunt up the Freeway and a blast back through the ‘burbs to the dealership I walked back into Rob’s office and quite confidently declared that, “this is the best Harley-Davidson I have ever ridden. It’s the ultimate Bagger package. Simply brilliant.”

Which begged the next obvious question: “OK, Rob, If I come to you with a new 2020 Road Glide, how much will it cost to make it so?”

“You’ll need to throw around Forty Grand at it.” Was his candid reply. That’s on top of the purchase price of a new RGS.

“The motor, the suspension, the swing arm, the body work, the labour, the tune and all the many extras. But for that Dave, what do you get?” he asked.

“The best Harley I’ve tested” was my honest answer.

If you want to find out the full story, talk about a test ride, or find out how the 131 ‘Crate Motor’ works for your bike, get in touch with Gasoline Alley Harley-Davidson.

The Gas Alley crew admit they weren’t exactly sure about big wheels in general until their Parts Interpreter, Doug Every, talked us into it. He said, “Do it, do it!”, so they did - and they love it.

So we asked Doug, “Why big wheels?”

“It’s a 23” Knock Out wheel that is pretty much a replica of a Harley CVO Wheel style and we’ve wrapped it in a Metzler 888 Marathon tyre, with some really cool Gasoline Alley letter writing (By Gold Coast Whitewalls) and an RWD wrapped Fender on it on it.” Doug began.

“I’ve always liked the stance that the big wheel creates on a motorcycle, I’ve been doing it for years. I started with 23’s and have gone to a 26” on my Breakout. On the Twin Cam Breakout it actually makes it ride better, with better clearance and it lets you throw it around a bit easier.

Naturally getting the Geometry, Rake and Trail right is a critical factor in making a big wheel work for our customer’s bikes - and we have a number of solutions to address that. It’s always about the compromise of form and function.”

There’s more to a big wheel conversion than just making the bike look cool. It also has to handle and perform. To find out more about big hoops, custom build ideas or performance upgrades, get in touch with Doug at Gasoline Alley.