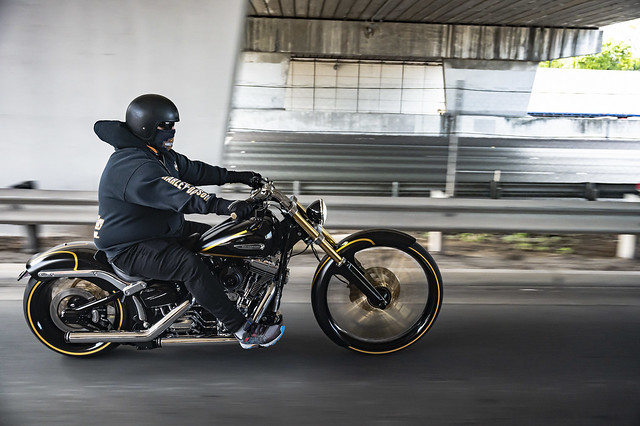 Doug’s big-wheeler was an offer too good to refuse.

Those of us of a ‘certain age’ may recall a famous advertising campaign where a wealthy bloke named Victor loved his electric razor so much that he bought the company that made it?

Doug Every is a member of the Parts and Accessory team at Gasoline Alley H-D and the story of his beautiful Breakout reminded me of that commercial.

After a photo shoot I sat down with Doug in the spares office at Gas Alley and asked for the breakdown on his 2016 FXSB Breakout.

“I didn’t plan on buying it. I was building it for a Biker Build-off, ordering all the parts and saying to myself, ‘don’t buy it, don’t buy it’ over and over, because I already had an Evo Softail at home, one that I’d spent waaaay too much money on, but then the parts started to arrive and I thought … ‘Yeah, I’m buying it.’” He grins.

“The first show I put it in was judged by Corey Ness. It took third place overall and it wasn’t even finished! I was pretty proud of that and Corey agreed. All it had then was the 23” Front Wheel set and Hawg Halter Triple trees.

Not long after that I had it painted, got the gold fork tubes from Topline tubes, had the seat re-done by Nerang Motor Trimmers, and then just basically rode it for the next ten to twelve thousand kays with a stage one kit fitted.

The pipes were interesting, they are prototype Reinhearts and Judd Reinheart came over to fit them personally - just to check the prototyping. It also had the RSD Power Air filter and a Screamin’ Eagle race tuner installed. I also added a Chop-C tail tidy.

It’s part of being a Harley spare parts guy. I wanted to be able to bolt that kit straight in. All genuine - complete. And to be able to say to people ‘this is what this does’”.

“From there I put on the under-perch indicators and it had Legend air ride suspension, but that’s out for repair at the moment (I left the switch on and damaged the compressor – my bad), so it’s running the stock shock temporarily - and it has a chain drive conversion.

“I put the chain on because after I got the Tyre Shredder kit, well … I maybe started dropping the clutch a little more than I should,” that was accompanied by another broad grin. “So, I started tearing some belts. 10 teeth here, 12 teeth there, so I thought ‘I’m just going to keep doing this’ so I put on the chain. Naturally it had to be a gold chain to go with everything else. The kit came from Rollies. I got 27,000km out of the first chain and it didn’t really need changing, but the rear sprocket did. The Performance machine front calliper was the 3rd Place Prize back at that first show. And that’s about it.”

As I was framing it up at various angles and locations during the photo shoot I understood why it’s a prize winner. It’s a great looking Harley.

“And it’s just a good bike too. I ride it to Tassie, touring, anywhere, and it’s my daily ride - to and from work unless it’s too miserable, but it rides really nicely. It’s the importance of getting the big wheel geometry right and they enhance the ride of the bike. This thing handles well, and the big wheel gives it better clearance and stability.

With standard length for tubes, the six degrees of extra rake that the Hawg Halter Triple trees give it … they are just the right amounts of rake and trail to work really well with the 26-inch wheel. We didn’t go for longer tubes because that tends to make the bike feel top heavy. But this setup tips in beautifully.

Ride-ability has always been one of the keys to this build. We tried a few things that didn’t work out too. We fitted a 260 rear and went straight back to the 240. It rides much better with the 240.

In the end we think it’s got to be a compromise of the way the bikes rides and the look.”

“So it rides like a normal Breakout?” I asked.

His answer was succinct, “No. It rides much better than a normal Breakout. It’s got better clearance, better turning … I could ride this under a standard Breakout. It was even better with the Legend Air Ride suspension because I could get it to full ride height. I’ll get it fixed shortly.”

When asked about any other plans for the bike, Doug sounded a little undecided, “Well … I’m sort-of tossing up now … we’re building a Meatball Springer out the back and we’ve got one of them in stock. Then when I took the fender off to paint it … and then … I was thinking that if I run it with no fender it would need a springer … and then I thought that I could paint it black and have a gold front fork and run the chrome springs on it and that would look really good …” and he tailed off. “But, for now, I just enjoy riding it.”

We understand that part too.

If you’d like to find out more about big wheel conversions or any custom builds contact Doug at Gasoline Alley H-D.  www.gasolinealley.com.au