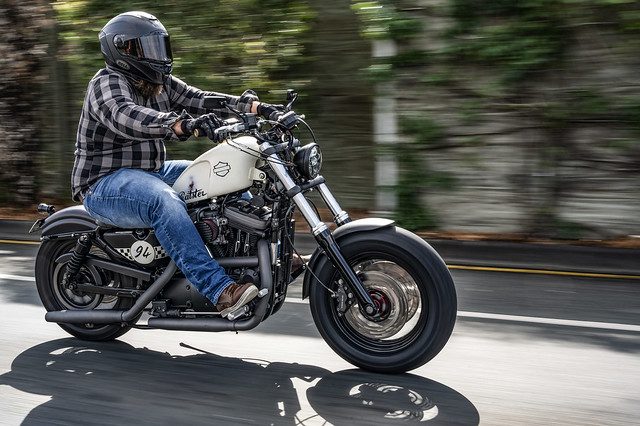 We’ve featured several of Al Magarry’s Custom Builds in HEAVY DUTY, including his perfect restorations of a military WLA and the Shore Patrol Big Twin, to the wild custom ‘Knuckle Duster’.

When he got in touch to tell advise that his son Jack had just finished his first build, I headed straight up to ‘Grumpy Al’s Garage’ in Brisbane’s North to get the lowdown.

I sat down for a chat with Jack just beside the bike parked on the driveway while Al was tinkering around with parts in the background.

“It had a leaking head gasket and all the standard problems for a bike that has been sitting in the weather: rust on everything and was looking a bit poorly, but it ran and was rideable. So I picked it up and rode it home, although at the bottom of the driveway the rear brake seized and caught on fire.”

“Yes, but we put it out” he replied casually, “So I rebuilt the rear master at that point and put new tyres on it, and just rode it around, while we started collecting a few spares and parts for it. But I always had plans to do it up.

Then one day I was out riding with one of my mates and we stopped for a coffee. When I came out I noticed that there was a lot more oil coming out of it than when we started out. It was coming out of everywhere, base gasket, head gasket, and was all over the back wheel. So I headed home, carefully, parked it in the garage and proceeded to pull it apart.”

In the background Al nods contentedly.

“I started plugging away at it. I pulled it down to bare frame and got some advice from the old man about preparing for paint etc and got right into it. Dad painted the frame for me and then I started on the engine. I didn’t split the crank, but we had everything else apart and cleaned it up nicely and we discovered that it had been bored out previously, 20-thou over.

I had the barrels honed and the valve seats re-cut, which was the only work I had out-sourced. From there I put in new rings and proceeded to rebuild it on the bench in the garage.

From there dad showed me how to apply Ceramic coatings, so I Cerakoated the whole engine.”

“What does that process involve?” I asked.

“Bead blasting!” the Master interjected for the rear. “It’s got be hit with 120 grit garnet because the texture of the finish is important for the Cerakote to bond.”

“… Bead blasting” Jack continued, “Make sure everything is clean and there is a lot of masking involved before you get started. Then blast it, blow it off with the air hose, wipe it all down with acetone and make sure everything is immaculate, then spray the finish on, give it a couple of coats and let it dry. It goes on like a paint finish.

Then we moved on to the tank and other painted parts.

I wanted something a bit different.” Jack continued. “You see a lot of Sportsters now that are all black, which I do like, but I wanted to do something that stands out a bit. So we went for white, but the design was the hardest part. In the end we went for the ‘old weathered’ look. Dad helped me choose a custom colour, which was more of a ‘dirty’ white, and then we set about designing the decals …”

“… then I started with the stencils,” Jack grins. “And after a fair bit of masking and lying out I came up with the designs and finish I was very happy with.”

Then we started talking about the other things he’s done to the bike.

“It had some chrome forward controls on it when I bought it, but the link sheared off one day while I was riding it and had to limp home in second gear. I had to go to the internet to get a lot of replacement parts. New switches and housings from Ebay, and I set about rewiring the bike. The taillight was upgraded and I bobbed the full rear guard. Then I fitted bigger brakes from a Street Bob and a Breakout, and a master cylinder off a Dyna…”

“The brakes are from a 2017 CVO Breakout,” Al interjected again.

Jack didn’t miss a beat, “And I upgraded the callipers. Then I got rid of the skinny 19-inch front wheel and fitted the fat 16-inch. It’s now the same size as the rear and it tracks really nicely now and is very stable while cornering. That’s also helped by the upgrade from 39mmm to 49mm forks and new Progressive 412 shocks on the rear.

I put a Le Para Bare-bones saddle on it and replaced the Drag Bars with some standard sportster bars that dad had in the shed. The oil cooler was on it when I bought it. I also added a GPS speedometer because we no longer had the option of running the direct drive unit.

And the finishing touch, a R.M. Williams leather belt holding the battery case on!”

“Anything else we’ve missed?” I asked

“You re-spoked the rear wheel,” Dad reminded with some pride. “It was chrome, remember, but you ceramic coated it as well.”

It was a nice snapshot of how the two of them interact.

The team has come up with a great first Harley, “It’s actually my first Road Bike, after a long run on dirt bikes.” Jack says. In what looks like the start of a family tradition.