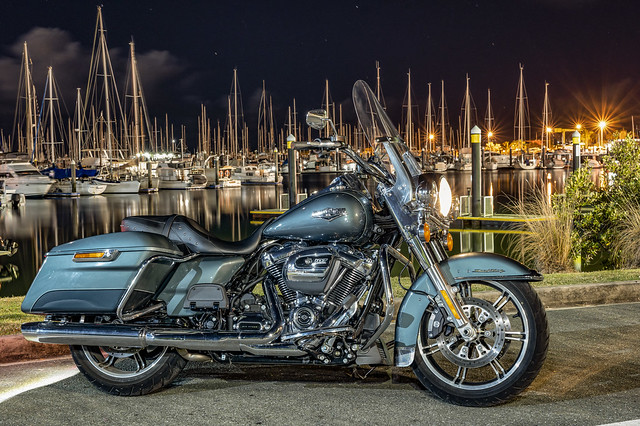 Hail to the King.

“Yeah, it does handle surprisingly well,” Spook said after he’d done the umpteenth U-turn during the photo shoot.

We were making our way up the Springbrook road on the Gold Coast Hinterland and he was repeatedly jumping off his Breakout and onto the Road King for the ride-by shots.

He was absolutely correct too, for a machine that tips the scales at 360kg dry, it handles like a much smaller and lighter bike.

The latest in the line of storied FLHR motorcycles has evolved to a point where it has become a very accomplished all-round machine. This is no longer ‘just’ a large capacity touring bike.

Going back to issue #149 of HEAVY DUTY and our first test of the current configuration featuring the 107 cube M8 engine, and all the ensuing Milwaukee 8s we’ve ridden since, the new motor has become better, tighter and a little more pleasant with every model year.

As far as stock engines are concerned, this is easily the sweetest and smoothest of the several dozen I’ve tested so far. And yes, I have written that several times on these esteemed pages, but that’s because every one of them since that ‘17 has raised the bar (and shield) slightly.

I don’t know if we’ve reached ‘peak 107’ yet, but this motor must be getting pretty close. I found myself constantly having to check the speedo because it’s so easy to exceed the limit on this bike. So effortless and refined has it become. Seriously. A number of times I was just cruising along during the two-week test, looked down at the tank mounted instrument cluster and went, “Ooops’, slow down Davey-boy.”

Or maybe the engine feels nicer because the whole package has improved overall.

There are a few things that have remained a constant throughout: the linked Brembo brakes with 32mm, 4-piston fixed front and rear discs are still excellent stoppers with a really nice feel to them. The ABS has become quieter and smoother than earlier incarnations too.

But that has all been enhanced by the new wheels front and rear. They have changed significantly from the 2017 unit. The older model had Impeller Cast rims. The front was a 17” x 130 and the rear was a 16” x 180. Now it has been fitted with great looking 18” ‘Slicer’ wheels both front and rear. The front is still a 130 section and it has the same 180 rear. Harley claims they have lighter unsprung weight and what they have done for sure is taken the overall handling up a notch.

The larger diameters feel like they have helped with ground clearance for the big footboards and have enhanced the manoeuvrability, flick-ability and all-round nimbleness of the machine.
The lean angles remain the same as the previously claimed 32 degrees, but the new model definitely feels like it tips in further and harder - and it absolutely feels more agile.

Flicking the Road King around inner city manhole covers or changing line to miss the potholes on the Springbrook road proved quite delightful and consigned the ‘heavy machinery’ feel of much older Road Kings to history. They have also given the bike a much leaner look and style, without compromising its Heritage look.

It’s a style that is unmistakably FLHR. I showed my 90-year-old father the bike and he said, ’It’s just like my ‘42 except for the saddle’. It still has the beautifully chromed ‘Hiawatha’ headlamp nacelle and running lights - that light the way brilliantly, and it still has Harley’s beautiful paint and finish. The Silver Pine and Spruce colours on the test bike had a deep pearl that changed hue slightly depending on the ambient light. Nearly everyone commented on how “classy” the bike looked. It has a beautiful line.

More than a pretty face.

But it’s not only just how this bike looks and the emotions it stirs. Sure it does make me feel like the ‘King of the Road’ when aboard and I did mutter to myself “Just look at that!” several times when I stepped back to photograph it, but over the course of two weeks I did a ton of different riding in a variety of conditions.

Around town, from peak hour snarls to leisurely boulevard cruising, to running errands, it was a delight. The EFI didn’t stumble once, even in the daily gridlock, the clutch didn’t get heavy, the gearbox was crisp and precise and the motor purred with minimal vibes throughout.

On the days where I got amongst it on both the Gold Coast and Sunshine Coast Hinterlands, and the environment ranged from tight and twisty mountain ways to fast open countryside with long open sweepers, with an hour or more of Freeway to get to the best riding spots, the bike was almost flawless.

I even did a section of nicely graded smooth dirt and it was sure footed throughout. In the loose stuff those excellent linked Brembos and the confidence-inspiring ABS made for a relaxed run – even on the really loose stuff.

Same for hooking in on the ‘twisties’. The balance of the bike is outstanding. It could do with a little more rear suspension travel on the really rough going if you get too far off the beaten track, but the 18” wheel combo makes for a big touring bike that is still very rewarding on a mountain pass. It has much grin-worthy versatility.

Then when you get back on the Freeway it’s as easy as dialling in the excellent cruise control, hunkering down behind that big (easily removable) windscreen, sinking back into the wonderfully comfortable and plush ‘all day’ saddle, stretching out of the big footboards and watching it all roll by in supreme style and comfort. Solid, planted and plush.

“But I still prefer my bike” was Spook’s final word.

As I told anyone who would listen over the course of the test (while trying to keep the ego in check), “I’ve ridden pretty much every model of new Harley-Davidson over the last 20 years and this is the one I would buy. This is me.” I like nearly everything about this motorcycle - right off the showroom floor. I’d chuck a stage one at it and it would be job done.