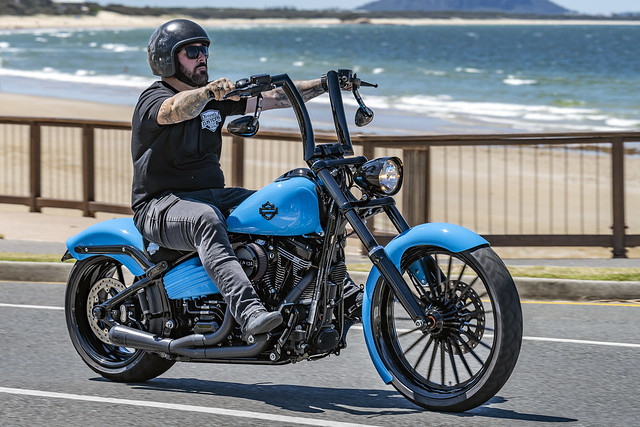 Adam wanted a bike that stood out from the Breakout pack ... he got it.

“We call it ‘Big Papa,’” Bryan Farrow told me as we were walking into his workshop, about to shoot photos of the custom 2015 Breakout his crew had just finished rebuilding.

“It’s got big ‘everything’ and it’s the same colour as Papa Smurf” he grinned. “We’re pretty proud of it too.”

Which was actually how I came to be on the Sunshine Coast and their Nambour premises with my HEAVY DUTY hat on.

Images of the bike on their Facebook feed had piqued our interest. A few phone calls and a week later I’d already snapped a few static shots of this great looking machine when its owner, Adam Cottee arrived to help with the riding shot duties.

While fussing about with my cameras, I asked Adam to tell us about the bike.

“Mate, it’s been a long process. It’s something of a childhood dream of mine to have a bike that I could be really proud of. I’m a Harley enthusiast and I’ve had many Harleys, but to get one with the potential to be featured in a magazine is a goal I’ve had as long as I can remember.” He beamed. “And after years of hard work, to be in HEAVY DUTY is a pretty big thing for me.”

“The bike was brand new when I bought it. It had a few things done at the dealership, as you do, the standard Vance &amp; Hines big radius pipes etcetera. I used to work at the local Harley dealer, and we used to refer to it as the ‘Breakout Special’. Pipes, Air Cleaner and a Tuner went out the door on virtually every one.

But this is actually the second build that Farrow’s have done on it. The first time we blacked everything out. But then I got sick of pulling at places and seeing so many blacked-out Breakouts we decided to strip it down again do something different that no-one else has done. And it really paid off.”

It’s running a 23” Front wheel with two-inch over forks and standard rake. The forks have been fitted with Custom Cycle engineering fork tubes and Progressive Springs. The stance of the bike had been further enhanced by a lowering kit fitted to the stock Softail rear suspension.

“I’m not a big fan of airbag suspension, I like to ride a bit harder than some of the air suspension’s capability.” Adam says with a smile.

We then talked about the powerplant.

The impressive S&amp;S 124 Cube crate motor received extensive head work from Ollie Logan and a match ported HPI intake. The air cleaner is S&amp;S with a Screamin’ Eagle Race Tuner that was tweaked by Wildcard Customs.

A unique Fab 28 exhaust system was fitted, as were a set of custom leads, so it’s currently putting out around 150 horsepower and “huge” torque.

“The crate motor was fully blacked out while it was stripped down too.” Adam noted with his focus on the bike’s aesthetic.

Also helping with the bike’s aesthetic are a set of 2”, fully internally wired Burleigh Bars with 14” rise that maintain its very clean line and look.

As does the fabulous McCully Customs 23” front wheel and Ross Wernimont Designs wrap around front guard. The oil tank is off a Rocker C, “Because it just looked right,” Adam says.

Looking just right is something that this build does all over.

Which brought us to how the bike rides. “Yeah, the bike rode beautifully before with the standard 21” rim, and I have to admit, at first I was concerned about how it would handle with the 23”, but the big wheel adds cornering clearance and allows me to lean into the corners a bit better and the way the bike sits on the road is perfect without compromising the ability to push it along without it wanting to wander.”

He smiles, “The paint is a custom colour, we call it ‘Cottie Blue’ and it was done by Danny’s Paint shop locally. I just gave him a bit of this colour and a bit of that - and he came up with a great result. It’s a true one-off house colour. To be honest when it first came out, I was like … Oh no! … What have I done! But when it all went back together it turned out amazing.  I couldn’t have asked for anything better.”

At which stage Bryan re-joined the conversation, “Yes, this bike is a real one of a kind. It’s got the only Fab 28 Exhaust made for a Softail anywhere in the world. Ralph our technician did a lot of great work on the bike. When he started on it, it was a frame, a swingarm and a gearbox.  So, we’re all really proud of the way it turned out.”

Adam continued, “Yeah – I have to thank Farrow’s Customs for the way it’s come together. Bryan and his crew are just the best. I wouldn’t take my bike anywhere else. His passion for the builds shows in his work. And I’d also like to thank my Partnern Jess and the kids for putting up with me an letting my dream come true with this build.”

“Any further plans for the bike?” I asked.

“Mechanically, no – it’s just the way I want it, but I do a lot of charity work for 42 for 42 Military awareness, so I’d like to take it to a few shows and see if we can raise some money and get their message out there. And basically, see where all that takes us.”

In that endeavour, HEAVY DUTY sincerely wishes Adam all the best. It’s a standout.

The main goal of 42 for 42 is constructing a war memorial specifically honouring Afghanistan combat veterans.  The memorial also honours returned veterans who lose the battle to suicide and mental illness at home. This memorial is being organised, supported, and built by Afghanistan veterans and their families who are all volunteers.

Many Australian veterans’ lives were lost during Australia’s involvement in the war in Afghanistan and lives are lost still when our veterans return home due to depression, post-traumatic stress and other mental health issues affecting our veterans.

42 for 42 raises money &amp; awareness for those returned from Afghanistan and their families.

Find out more at their web site 42for42.org.au