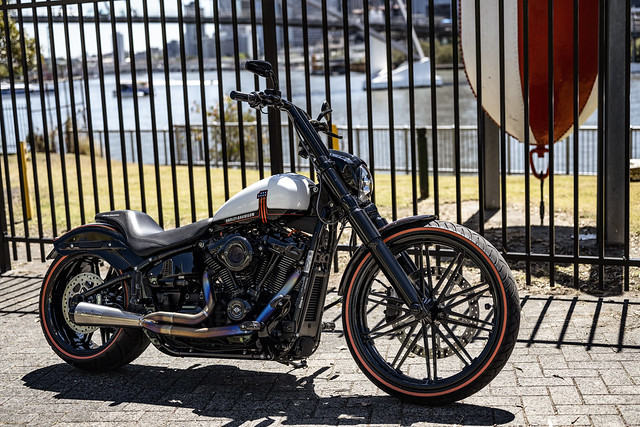 As he was pushing it off the showroom floor, and out the door, Rob Keuning asked me, “You’ve ridden one of these 23” front wheel bikes before, Dave?”

“Yeah mate. Plenty, several of your builds in fact.”

“Yes, well, you know they ride a little differently, when you are cornering there’s more …”

A few minutes earlier we were sitting in his Dealer Principal’s office discussing the build.

Across the desk I began, “What was the goal with this build?”

“It’s the first Breakout I’ve ever owned, but I’ve always loved the look and the line of the bike, but we’ve built so many Breakouts that were all similar. I wanted to do something that stood out – without doing big, expensive engine modifications. We wanted to just work on the line of the machine. And the way it sat on the road and the cleanliness of the bike. Less is more.

The paint was also a consideration. We do so many black bikes, so we wanted to see something different. The job went to Mark Walker and he gave us exactly what we were looking for. It’s finished in a 2017 Night Rod Special pearl with custom graphics – and it looks great.

We fitted Slamtail suspension, and a Titanium Red Thunder Jesse James Signature pipe and we put a KPR fork cover kit on it. They are standard triple trees.

The name of the game was to make the bike look as clean as we possibly could. Hence all the internal wiring in the bars and hidden cabling. The bars are 14” Burleigh ‘Straight Up’ inch and three-quarter T bars.”

“The wheels?” I asked

“The back wheel is stock, painted black, and the front is a 23” Replica by Big Daddy Customs.

As for the motor, it’s a stage two. It has a 475 cam upgrade in it, that wakes it up and gives it that lumpy idle while the titanium pipe is different - which was also what we were looking for.

We spent a lot of money blacking the bike out. And spent a lot of time making it looking super clean. We didn’t want to build a crazy-expensive, big dollar show bike, it was about building a lean and mean street bike that you could ride every day.

It probably gets more attention than any other bike we’ve built – it’s a real conversation starter and the T-bars are the biggest polariser of all. 40% of the people that come into the shop don’t like the bars. 50% absolutely love them and 10% are totally undecided – which is also exactly what we wanted to do – to get people talking. We’ve already built replicas of this bike for customers. In fact, the last one we started was sold while it was still on the bench in the workshop.”

At which stage he handed me the key fob and stated pushing the bike towards the door.

The first thing I noticed – and grinned to myself as I turned onto the service road outside the dealership, was ‘resistance’.

The combination of the big 23” front wheel and 18” rear, with a 260 section Metzler, required very similar energy and effort to turn as the last stock Harley I tested – a 2021 Fat Boy. And like that bike I found that it actually added something to the fun factor of riding it.

It needs more input from the rider, hang a knee out, move some weight off board and use exaggerated body English. The big wheel does afford a little more cornering clearance too.

When I got out onto the M1 Motorway the real joy of the bike became apparent. It’s rock solid on the road and the combination of the noise from the Red Thunder exhaust and the pull of the stage two engine made winding the throttle on and top gear roll on very rewarding. In fact, I found myself slowing down to 85kph occasionally, just so I could enjoy the experience of accelerating back up to the speed limit. The on-ramp was even better.

The ride is firm and solid and very planted of the road. It’s also supremely comfortable. Especially for the longer legged. And Rob was 100% right about the handlebars. They give a perfectly relaxed riding position with a slight lean into the wind so there’s no need for fairings or bodywork, even at Freeway Speeds.

When I got into the stop-start of the inner city traffic the bike was just as impressive. The motor remained very tractable and easy going at low speeds and low speed stability is good – with some allowance for ‘resistance’.

When I did park it up to photograph it, dropping the rear down with Slamtail was very easy – as was lifting it up again after shooting.

The great advantage of the adjustable hydraulic suspension is the bike remains ridable at its various heights and it’s very easy to adjust.

But the real stand-out through the lens was exactly what Rob had told me they were looking for – the great lines of the bike. It’s a fabulous looker. From the under-perch indicators to the Siktail tail tidy the line is just remarkably clean.

The smile on my dial as I pulled up back at Gas Alley told Rob all he needed to know.

I asked him, “How much is it to build a bike like this?”

“That depends on what the customer wants. To reproduce this one would cost around $65,000 all-up. But we also build bikes off or around it. This one has a $5000 exhaust system for example and a lot of inclusions that I was specifically looking for. But it’s all about the look and the line and we can custom design to suit.” He replied.

Take a line from HEAVY DUTY. If you’d like to find out more, get in touch with Gasoline Alley H-D.