A link to an article on UK web site ‘Visor Down’ popped up on my Google feed and piqued my interest.

It took me to ‘The Ultimate Motorcycling Bucket List’.

So I went through it - and it really brought home just what a fabulous ride we’ve had. (The Co-pilot has been along for much of it!)

2021 marked 20 years since I had my first article published in the motorcycle press and the gigs, events, people and array of motorcycles that followed have been … well … amazing. List worthy.

The first nine years of my Moto-noting career were with Kiwi Rider Magazine when we lived in Auckland.

They were halcyon days living in what may be the best place to ride a motorcycle on the planet - with a magnificent array of machines passing through my garage and some life-long friendships made along the way.

The last 11 years have been with Heavy Duty Magazine - since we moved home to Australia. That gig has enabled me to ride an example of every new Harley, Indian and a heap of other large capacity bikes over the decade too.

‘Lucky’ doesn’t even begin to cover it.

So, with due credit, I’ve paraphrased or commented on the Visor Down list - and added a few items from an Antipodean perspective: 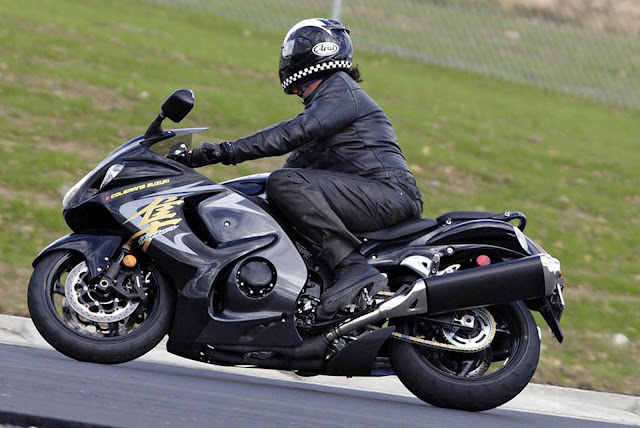 Visor Down suggest a Suzuki Hyabusa. I agree. I had two different ‘Busa test bikes. I did track days and a lot of sports-touring around the North Island on them.

What an utterly intoxicating machine. The ease with which it travels to light-speed is extraordinary. The problem for me is that it becomes an exercise in self control.

On more than one occasion, if the cop hadn’t already been booking someone else – the bike would have been impounded. Going silly-fast is just *that* easy. Effortless, awesome and exhilarating.

But it’s machine for the strong willed. Keeping one eye on the Speedometer at all times eventually becomes onerous.

But yes – I agree, it needs to be experienced. Other machines in the category I rode (and drew the same conclusions) included a couple of R1s, a Gixxer, Fireblade and a MVAgusta F1. The MV was also what I consider the best-looking bike I have ever ridden. 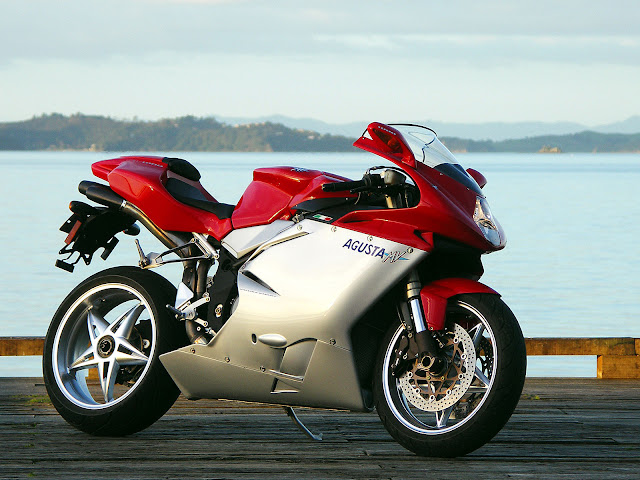 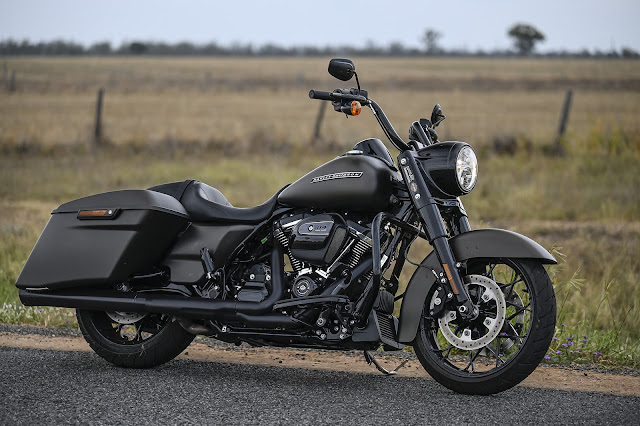 Visor Down approaches this from a UK perspective and point to a Hog’s suitability for open spaces, big skies and wide-open countryside.

I haven’t ridden in the US – but I have covered a hellofa lot of miles in every Australian State on dozens of different Harleys. Near enough so I’ll give it a tick in principle.

You either get Harleys or you don’t. I do - and have enjoyed every single one of them. I would buy a new Road King in a heartbeat.

3. Experience an original Brough Superior (or another classic motorcycle). 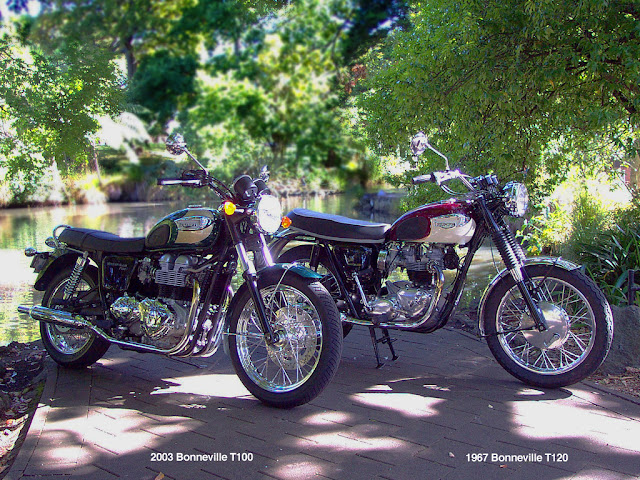 I really appreciate them and understand the attraction and the importance of their history, but I can’t go back. Even this 60’s Bonneville, with its right-foot shifter, I found to be a right pain to ride. I now say, “I love classic motorcycles - as long as they are somebody else’s.”

Gimme ABS and fly by wire thanks.

4. Take a KTM on the Picos d’Europa 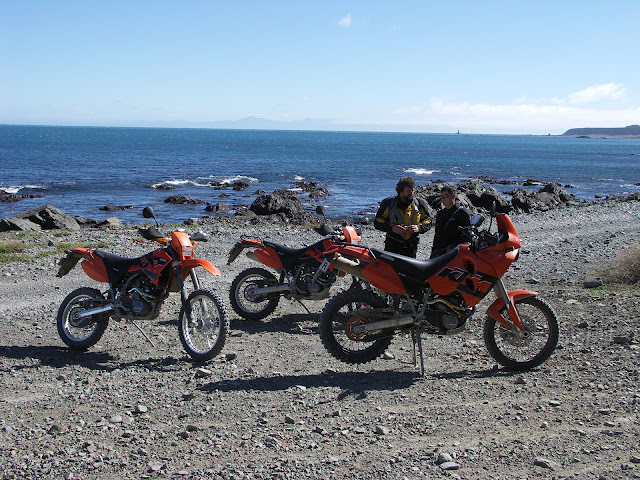 The Euro-based gist of this one is to take a capable, smaller capacity bike (300cc) on a renowned or epic trail ride.

The Capital Coast ADV ride in Wellington ticks that box.

I indeed did much of it on a KTM. It’s basically a ride to the top of various mountain peaks that surround the NZ Capital and then travel around the rocky foreshore.

To say it’s spectacular is to grossly undersell it. I also rode it on larger ADV Machines: A Triumph Scrambler, a Tiger and a V-Strom as well. My favourite of all was the Scrambler. I’d take a new one anywhere. Particularly if you are a big guy. 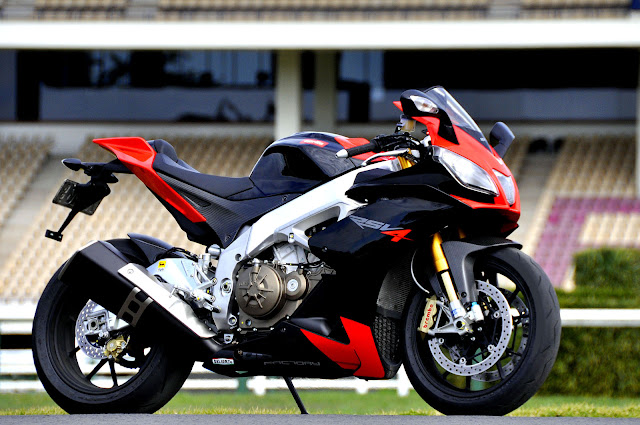 I haven’t ridden a later model Duc, but I have ridden a MH4, a few Multistradas, a Diavel and an Aprilia V4. Near enough.

I call it ‘instant BAM’. The time between deciding to screw the throttle and the moment the machine surges forward is pretty much unique on a Ducati. Instant.

Their sports bikes have a brutal and intoxicating delivery. I’ve never been tempted to buy one though. They become that exercise in self-control thing again - and that really isn’t my strong suit. 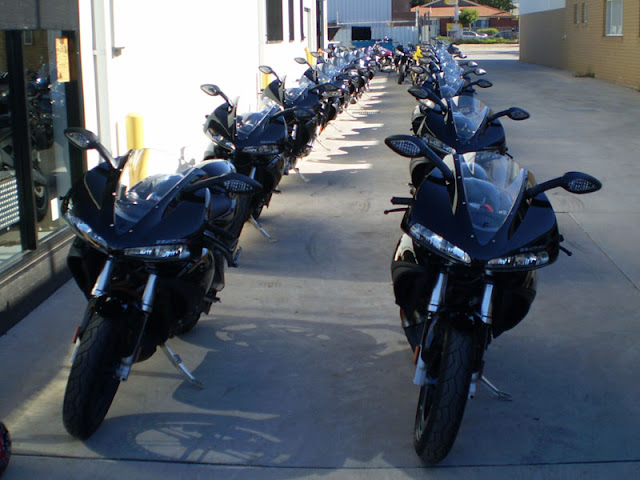 No to this one.

I have done track days at Super bike and Sports Bike press launches … and to be honest ... I didn’t enjoy them much.

Yes, it’s interesting to see just how fast they can go without fear of losing your licence, and exploring the capability of the machines is important for perspective, but once I did a few circuits … personally I’d rather go ‘somewhere’ than ride laps.

Most track bikes are built for compact size humans too. That’s not me.

7. Learn to ride a trials bike

I contracted to the Gas Gas importer in NZ for a while and got to play on a few Trials Bikes when they came out of the crate.

'Stretch', our resident professional Stunt Man and trick riding maestro at Kiwi Rider summed it up best. He described it as needing to have ‘The Brain’ to do that stuff well. He maintained you need a cortex with the sense of balance paired with reaction times that sets the good ones apart. Some of it is acquired skills. Some is physiological. It was fun to try – I get it, but it's not something I’d put on my own Bucket list. 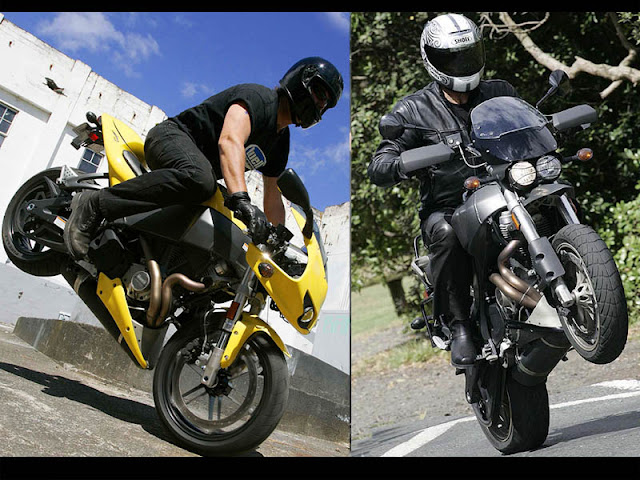 A boss? Nah. I can wheelie a big bike reasonably well though. And do some basic stunts. Hooking third on a Rocket III – not so much.

These days it’s pretty easy to wheelie a modern mid-performance motorcycle (or not - with traction control) so it carries virtually no cred anyway. If you get caught it’s impound-city. Find a deserted spot and work it out if you need to.

9. Find out what the electric fuss is all about. 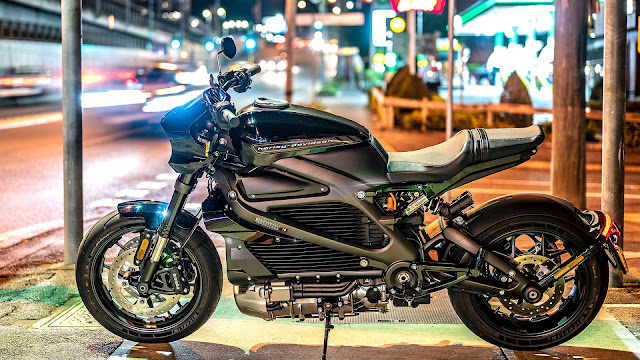 I’ve always maintained that torque is one of the things I crave in a bike. I rode my first electric in 2010. A horrible looking, low powered Sportster-framed thing. And loved it. 100% torque all the time is, for me, a big thing. 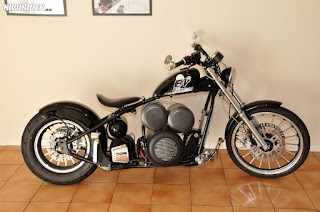 Lately I’ve spent extended saddle time with a Harley Livewire. Simply … I would buy one. The huge price tag notwithstanding. It couldn’t be my only bike either - due to the limited range, but I thought it is fantastic fun and it would suit 80+% of the riding I do.

Get over whatever ICE, Hippy or Politik bias you have and experience one for the pure linear surge of it all.

10. Ride a true superbike on track 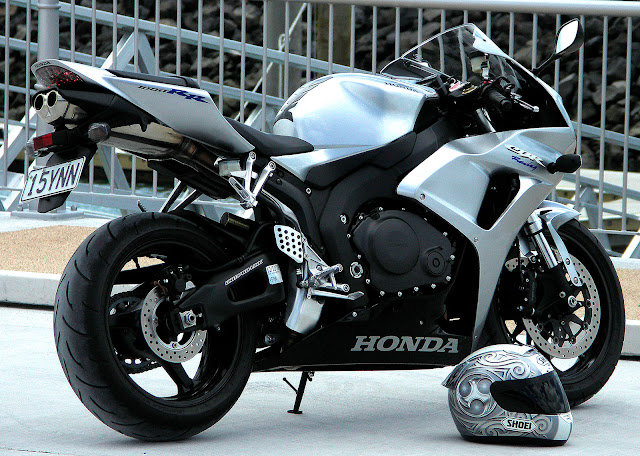 Yep - See point 6. It needs to be experienced – but I never got the habit. I had a lot more fun on a Buell on the track.

11. Ride an adventure bike with an off-road God 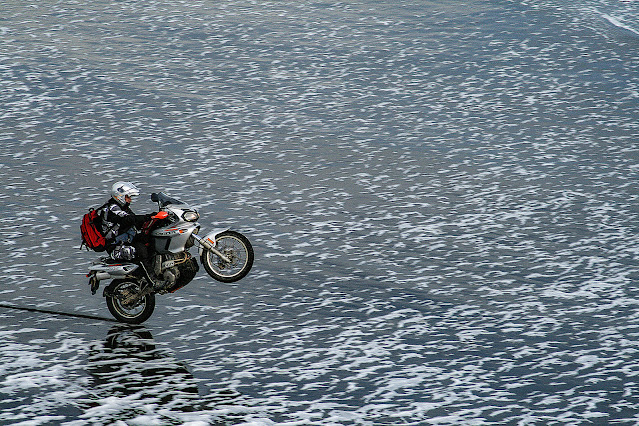 Gods? No, but plenty of Champions and true Aces. I used to tag along on the rides organised by the crew at Kiwi Rider as their photographer and scribe. Vege and his cohort used to plan dirt road rides all over the North Island and they were simply magnificent events. It became my favourite type of riding. I’ve been totally hooked ever since.

Even now, back in Brisbane, and the last four months I’ve spent living with the Harley Pan America have been a search for all the dirt roads and back tracks I can find. 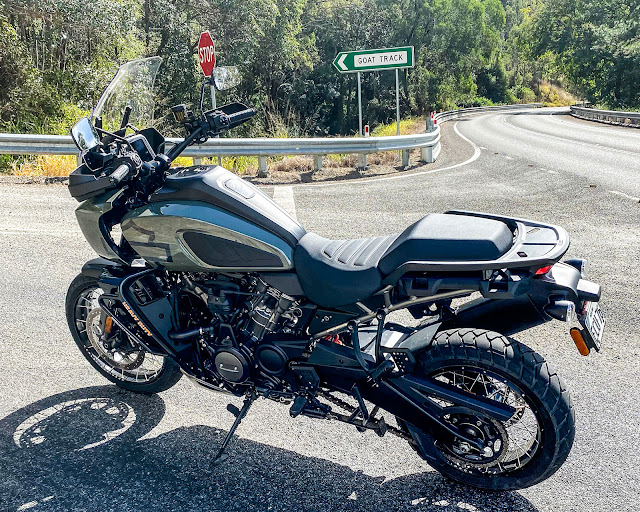 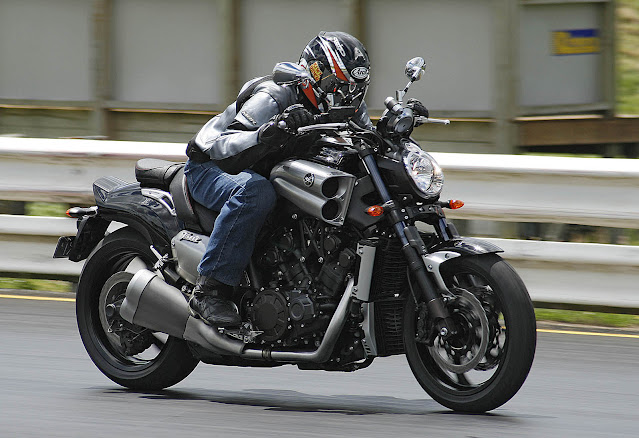 When Yamaha re-released the mighty V-Max they invited me and my Editor to the local Drag strip south of Auckland to have a thrash.
They actually gave us the keys and said ‘let yourselves in’. So, we had a morning of unlimited runs flogging the 200-horsepower unit down the strip. Exhilarating undersells it.
The 1800cc V-max is an all-time bike.

13. Tour the South Island of NZ 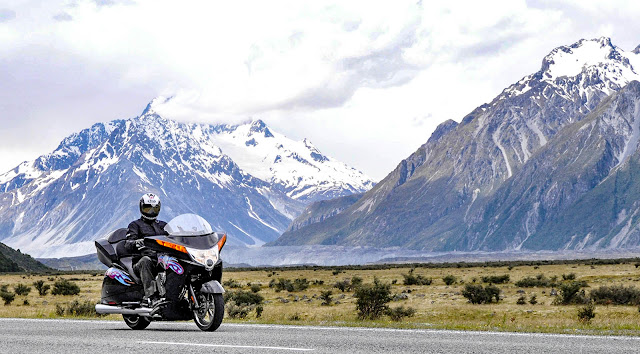 If there is a better place on the planet to tour on a motorcycle I sure want to go there. We’ve done multiple laps of the SI on Sports Tourers, Baggers and ADV bikes - and been in awe on all of them.

Bike friendly accommodation abounds and the scenery and landscape is truly, truly epic. And then there are the endless twisty roads that snake back and forth across the towering alps or up and down the west coast. And you don't have to ride for days between them.

In no particular order put these on your list; Queen Charlotte Sound, Milford Sound,  Arthur’s Pass, Lindis Pass, Buller Gorge, The Caitlins, Takaka Hill, Akoroa … in fact anywhere on the island is superb to ride apart for the Canterbury plains that are well … plains. I can’t stress this one enough. 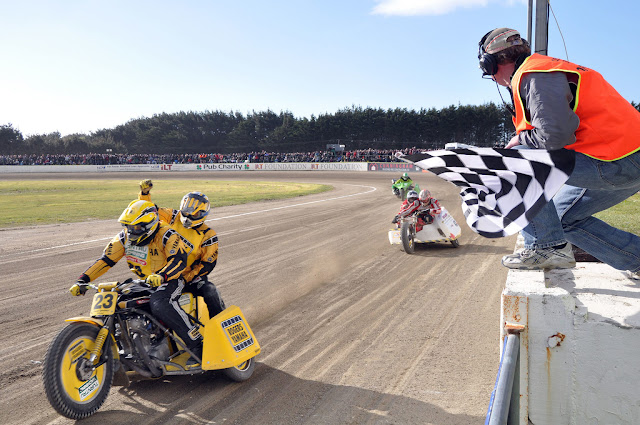 It’s on again in 2023. This is a spectacle of Motorcycling in Invercargill NZ. A multi-discipline event over 5 days with Track, Road, Speedway, and Beach racing being just some of the events.

Most of all it’s a great party and unique celebration of motorcycling in a very remote part of the planet. That makes it all the more special.

15. Ride Cape Melville and Cape York on an ADV Machine 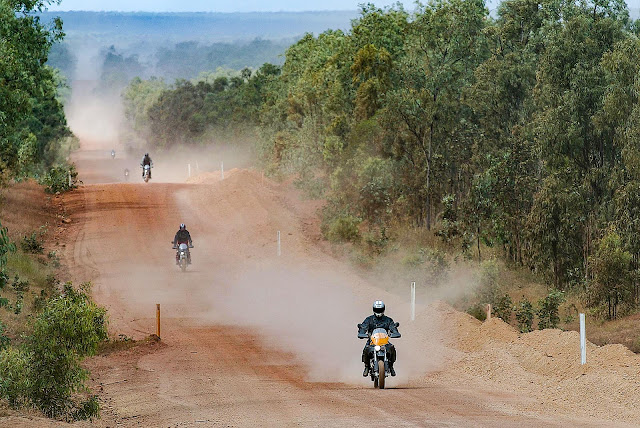 You have to go in the dry season, but the ride to the top end of Australia is unique.

1000s of km of red bull dust roads interspersed with water crossings and watering holes (pubs) make for a different type of epic ADV ride. Put it on the list. You won’t regret it.

There are plenty more to list, too. But that’s enough for now.