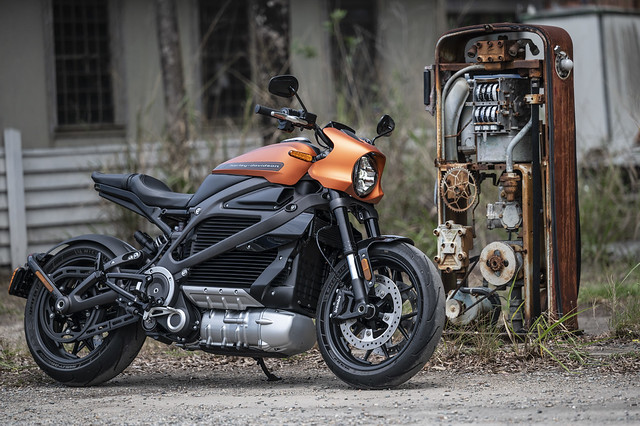 Fun, fun, fun, till they take his ICE away.

Mick said, “Get into Morgan & Wacker and get yourself a ride on the LiveWire. We need a ‘second opinion’ piece to follow up from the launch report.”

Shortly after, I was getting the pre-ride run down from the Sales Manager, Glenn Callaghan.

The ensuing run around Brisbane’s Northern suburbs, included some Freeway, a few on-ramps, some boulevard cruising and a few back-roads.

We’ve covered the performance, capability and shortcomings of the machine in numerous HEAVY DUTY reports so far. Accordingly, it’s sufficient to say that by the end of the run I was even more enthusiastic about Electrics than I had been before I rode the LiveWire.

When compared to the half a dozen other electric bikes I’ve ridden; I was blown away by the performance of this motorcycle.

I thought about what first attracted me to Harleys, way back in the last century. It was the lazy power and the big torque hammer of a massive Vee twin.

The fact that 100% of LiveWire’s huge torque hammer is on tap, at any time you want it, had me grinning very broadly to myself on a number of occasions during the afternoon. Winding on the throttle and the instant surge is quite exhilarating.

To paraphrase what Mick said in the launch report in Issue #173 of HEAVY DUTY, its limited range means that it isn’t for every everyone or every application - and that proved true as I watched the battery level drain on the Freeway.

But then, it would be suitable for about 80% of the riding I do. Going to and from jobs, work commitments and any number of gigs around town. A blast down to Murwillumbah and back with my pals¬ is just not doable – for now.

It's a great urban vehicle. It’s narrow, it lane splits easily and it gets off the line with ever-so-quiet gusto. After riding it for 10 minutes I didn’t miss changing gears at all, although I did have a few vain attempts at kicking it down a gear on approach to some corners.

I really enjoyed riding it and the way it goes genuinely surprised me. That's even after both Brum and Mick had told me what to expect from the machine.

Where does it fit?

If you are approaching this bike as a hard-core Harley ‘Big Twin’ person, it’s easy to understand why it’s of no interest. And it’s not hard to understand the acrimony some commenters have displayed either. It’s a mighty long way from an Evo or even Harley’s own ‘chrome’ marketing from not so long ago.

Purely as a motorcycle enthusiast it’s hard not to be impressed by its capability - for an EV.

It is Supersport quick, it's potent and it really is quite an impressive piece of American know-how, engineering, design and development work.

The technology is of-course next level. The suspension, Brembo radial calliper brakes - and the whole package worked well for me on the Quick Spin.

It’s not really designed for a 195cm tall guy so my legs were a bit more folded up than I would have liked, but that’s true of any sports-oriented machine. The other ergos, saddle, handlebars, switchgear and cruise-control were all that I expected from a premium Harley-Davidson.

Have you heard that lament from various corners of the bar, the internet ¬- or even our own Facebook page?

Every time we post an image of the LiveWire, amongst the positive responses are posts like: “Sorry but you’ve lost a client!” and “It will be a Massive Failure you wait and see. Harley-Davidson have lost their way.“ or “NOT A CHANCE IN HELL.”

We understand these responses too.

I doubt there has been another vehicle in the storied history of the Motor Co that has attracted so much attention or put the brand so squarely in the public eye.

If there was a publication that did not devote many column inches, online posts and picture galleries to the LiveWire, I didn’t see them.

From mainstream newspapers to specialist web sites, the LiveWire garnered headlines and put the brand at the forefront ¬- and generally painted the MoCo as a leader in innovation. It added up to publicity and brand profiling with untold value. Even if they never sell a single unit.

Another consideration is the often-quoted conundrum of the average age of a typical new Harley buyer.

According to a Reuters article published in 2018, prior to 2009 Harley regularly reported data on average rider age. They stopped. H-D said it’s because, “The number did not measure the outreach effort.”

Other more cynical sources say that it’s because the constantly ageing average buyer demographic was impacting on the share price. The long-term effects of a dwindling market’s writing could be seen writ large on the ageing Baby Boomer’s wall.

If the average age numbers were extrapolated, sooner or later the market for heavyweight chrome cruisers becomes too small to be viable ¬- simply because not enough young-un’s are coming on board behind the older riders.

Playing it by those numbers, H-D have to come up with more diverse products sometime in the future. They simply have to.

Staking out territory in an Electric market that might attract a younger market, if and when the cruiser market does eventually ‘die off’ also makes sense.

They won’t purchase a flagship LiveWire, not at that $50k. But they might well look at one of the numerous other smaller EV prototypes in development.

These are the dates by which countries, states or cities plan to ban the sale of new vehicles with internal combustion engines (ICE).

Whether motorcycles will be included in the ban varies by jurisdiction. In most cases the time frames are longer, but a flow-on ban still may loom on the horizon.

There are other incentives - or disincentives already in play. According to British Dealer News, in the UK for example, the Government offers a plug-in motorcycle grant of 20% of the purchase price of certain electric motorbikes and scooters (up to a maximum of £1500), and the Ultra-Low Emissions Zone in central London that came into effect in 2019 includes non Euro3 compliant motorbikes, too.

Some entities have made large capacity motorcycle registrations or insurance prohibitively expensive to that same end.

Some of the rationales behind these measures include: “Reducing health risks from pollution particulates, notably nitrogen oxides and other emissions.
Meeting national greenhouse gas, such as CO2, targets under international agreements like the Kyoto Protocol and the Paris Agreement - or energy independence.
The intent to ban vehicles powered by fossil fuels is attractive to governments as it offers a simpler compliance target, compared with a carbon tax or phase-out of fossil fuels.”


It doesn’t matter whether we agree with the Kyoto Protocol. The legislation is coming. The change has begun.

As unpalatable as it might seem, sometime in the not-so-distant future, in various parts of the world, a new petrol-engine motorcycle sitting on a showroom floor might be illegal.

Apart from intense lobbying, and continuing to make their air-cooled engines Euro compliant, what can Harley do about it? Well, marking out some territory in the electric vehicle marketplace might not be so crazy after all.

I had a long conversation with Brum when he’d just come back from the big US launch.

I said, “I heard they aren’t planning on selling many?”

“Dave,” he laughed, “They aren’t even planning on making many. It’s being built on a spur line. Big sales numbers are not the goal.”

That’s the way he saw the LiveWire too: A foray staking out territory for future markets and development.  At $50,000 none of us are expecting it to sell in large numbers. It’s a harbinger. A portent.

We do understand the online rage. For many enthusiasts, it’s a dystopian and downright distasteful crystal ball to look into. “The city will take the fuel injectors from my from my cold dead hands.”

Meanwhile, at Breakfast Creek and the here and now, I returned the test bike, grinned widely and thought Harley's latest creation is an impressive bundle of feel-good laughs.

I acknowledged its obvious limitations but still thought that maybe, with the way it goes, it’s a glimpse of a future that might not be altogether bleak either.

Did I mention the torque?