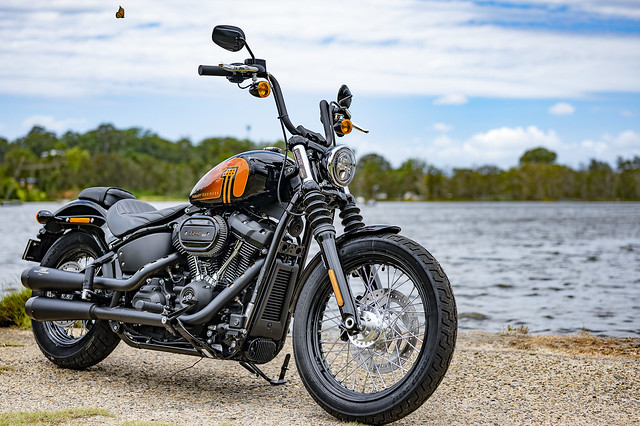 New Street Bob is the lightest 114 yet.

The majority of HEAVY DUTY readers will know exactly what the significance of mentioning Arthur ‘THE FONZ’ Fonzarelli and the show ‘Happy Day’s is.

But for our younger readers, ‘Happy Days’ was an American Sit-com that originally aired between 1974 and 1984 - back when there was only three or four TV stations depending on what city or town you lived in.

The show was set in the idyllic 1950s and ‘The Fonz’ was a featured character who was the doyen of cool in cast of nerds. He won all the fights without lifting a finger, got all the girls and was portrayed as the coolest cat ever.

Over the seasons this paragon of style rode a number of different motorcycles. Numerous Triumphs and Harley-Davidsons, with a Knucklehead chopper amongst them.

Fast-forward to 2008 and after my first ride on a Dyna Street Bob I speculated that, “This would be the bike that ‘The Fonz’ would ride today”.

Skip forward another 13 years and a test ride on the 2021 Model and that sentiment definitely still holds true.

With supply lines and test bike availability curtailed by Covid, and with our deadlines fast approaching, the good folks at Gasoline Alley answered our call and said, “Sure Dave, you can borrow our Demonstrator HEAVY DUTY for testing.”

So it was on the following Monday morning I wheeled out of their Slacks Creek showrooms aboard the latest Orange and Black incarnation of ‘The Bob’, armed with my best ‘Fonz’ impersonation (a poor one) and a general direction, rather than a destination, in mind.

As soon as I turned onto the old Pacific Highway service road and opened up the throttle the surge of the latest 114cube slung in the familiar M8 Softail chassis a spate of very uncool, very cheesy grinning began.

At 288kg dry, or just under 300kg, in running order, the Street Bob is the lightest 114 Cube yet and it certainly shows in its performance. The similarly well-performed FXDR was a mere kilogram heavier, but the Street Bob has several advantages in overall road manners.

The Electronic Sequential Port Fuel Injection is also very well sorted by now, the mapping of which Mick reckons is the main reason for the constant improvement we’ve noticed in the M8 platform since its inception.

This example continues that trend. It has been further enhanced by Gasoline Alley’s ‘Red Thunder’ brand slip-on mufflers. These are fully compliant and aren’t much louder than the standard cans, but they do have a richer, deeper sound. When I did get to tap ‘The Bob’ out on the M1 on ramp just down the road from the dealership, they definitely helped the bike breathe in the top end of the rev range.

It was easy to understand what the FXDR’s massive 240 section rear was all about - getting the power to the strip with the biggest contact patch - ‘The Bob’ is fitted with a much better handling 150-section, 16-inch rear that makes for a much more agile machine.

Combined with its 100/90, 19-inch front wheel, 1630mm wheelbase and reasonably aggressive 30-degree rake, it makes for a Harley that is very ‘chuckable’ when performing low to medium speed manoeuvres and U-turns (while I was looking for looking for a photo op), but is was very solid and reliable in the faster, tighter going when I got out amongst the Islands waterways foreshore and wicked it up some.

With no fairings or bodywork up top and a 680mm saddle height that contributes to its low centre of mass it really does complement the capability of the current Softail Chassis superbly.

Dialling-in the pre-load on the easily adjustable mono-shock rear and the 49mm Showa Bendy valve forks make this a sweet and confidence inspiring package to wind the throttle on.

The saddle is surprisingly comfortable, while the mid controls and mini ape handlebars make for a riding position that is fairly upright and easy to move around on - and to get a knee out - to compensate for its 28.5-degree lean angles.

If you do happen to go into a corner too hot, grabbing a handful of the 4-piston fixed single front or stomping on the 2-piston floating rear brakes will pull it all up with the safety of Harley’s excellent ABS. They are good and reliable brakes.

The pillion seat however is most suitable for a passenger you don’t like riding with and I’d probably just remove it.

It’s partly why aesthetically the 2021 model doesn’t sing to me as loudly as the 2008 model did.

The orange and black graphic on the tank is typical Harley-quality paint although I’m still undecided about the black crinkle finish on the handlebars that extends around the surprisingly legible, compact, bar-mounted LCD instrument panel.

But its look is the only category where the new Softail isn’t significantly ahead of its Dyna predecessors.

I still preferred the style of the 96-cube’s chrome motor and front end – and it had a nicer rear guard, but the smoothness, responsiveness and performance of the new engine, chassis, and suspension mean that only a true Dyna die-hard could deny the huge improvements Harley have made to the Street Bob over the years.

The phrase ‘Jump the Shark’ derived from a 1977 Happy Days episode in which Fonzie jumps over a cage full of shark while on water-skis. This gimmick strayed absurdly from the original storyline of the show. Subsequently it’s become a phrase that is commonly used in reference to unsuccessful gimmicks or bad plans.

I’m happy to report that the 2021 Street Bob is a mighty long way from jumping the shark. It remains entirety on-point and it’s still way cool … “Heeeey”.