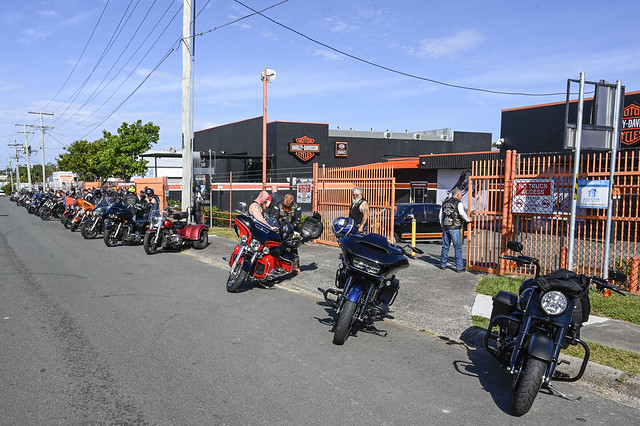 Dave spends a Sunday with the Gasoline Alley H-D HOGS and a Road King Special.

Subsequently I was at the Slack’s Creek dealership for the 7am muster on the following Sunday, keen and ready for the detailed ride briefing - albeit ever-so-slightly apprehensive about the very high temperatures that were forecast for later in the day.

Around 50 riders and passengers on 40 beautiful Harley-Davidsons were parked in a row out front, with a wide variety of models represented.

The welcome I received was generous, enthusiastic and I was already having a great time ¬¬¬- even before I’d ridden very far on the magnificent Road King Special Demo that Gas Alley had loaned me for the event.

The plan called for ‘stands up’ at 7:45am and to make our way west out of Brisbane, beyond Ipswich, to cross the plains to Laidley and a compulsory fuel stop ¬¬- even for the tourers. Because we were ultimately headed far enough west that fuel can be scarce on a Sunday.

After a Coffee at the Maccas next door to the Caltex, we left Laidley at 9:45am with the temperature already heading north of 30c.

By the time we got to the next ‘water’ stop at Ma Ma Creek it was into the high 30’s but the roads soon got a whole lot more interesting.

I rode ahead to get into position for some ride-by photos. After the group passed by, Mav peeled off the pack to lead the way and catch up to the main group.

I dialled the Road King in tight behind his well sorted Road Glide and the riding was ‘spirited’ to say the least. We made up time over the great winding road that heads south-west along route 80, through the hamlets of Fordsdale and West Haildon.

We caught up just before the pack crossed the New England Highway near Pilton and moved back on to the rolling plains, onward to Clifton and beyond.

When we arrived for lunch at the Darling Downs township of Leyburn it was even hotter, but nowhere near as hot as the weather forecast had predicted.

“This light overcast will keep it reasonably comfortable,” I prognosticated several times during the many friendly conversations I had in the beer garden of the Leyburn Hotel that day. The lunch was good. The company was better. And my predictions could not have been worse.

From the pub we headed Northeast towards Toowoomba, while the thermometer continued heading due North.

By the time we were in the Garden City proper it was well above 40c. When we got to the farewell stop at Plainland, I overheard some of the Bagger riders saying that their onboard displays were showing 46c coming down the hill. My watch said 47c.

After saying many thanks for the company and goodbyes (and rehydrating yet again) I headed back towards Brisbane on my own.

On the other side of the ranges, at Marburg, the temperature ‘plummeted’ to 35c and it all felt positively cool and comfortable again. Relativity is an interesting thing.

By the time I got back to base there was over 500km showing on the Road King’s trip computer.

The bike was absolutely fantastic. It covered plenty of freeway, open roads, back country twisty sections and group riding with great comfort and aplomb. It looked great while doing it too. I wasn’t messing about while catching up to the pack on several occasions and for a stock bike it really did hammer. Hard. It’s a brilliant all-round machine.

As for the day, well, you can read a lot of opinions about HOG at various places online, but what I encountered was around 50 keen Harley enthusiasts who rode far … and fast ¬- and had a great time doing it. No politics, no agendas. A bunch of like-minded people enjoying themselves. Friendly, welcoming and real good value. It's a great Chapter.

It's funny how sometimes it’s the ‘adversity’ on a ride that forms the strongest bonds or the lasting memories. The experience of riding a long way in searingly hot conditions with the Gas Ally HOGS will give us all something to talk about when we meet again - for a very long time to come.