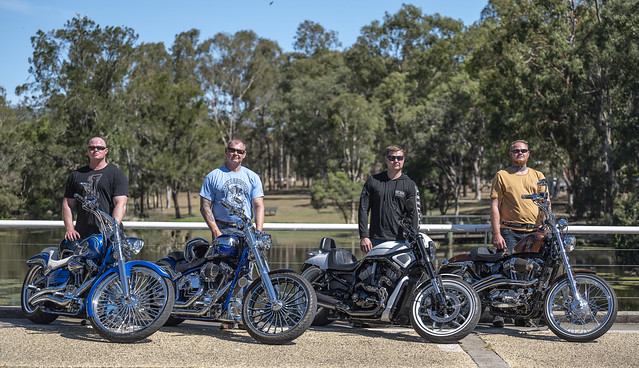 We’ve covered a number of Harley-owning father and son combinations over the years in HEAVY DUTY, but when Mark ‘Duckee’ Duckworth told me that all three of his sons were Harley enthusiasts and that he had even bought a Sportster for his wife, it was a feature story in the making.

Before we headed out for a series of photo shoots I sat down in his garage with Mark, Josh, Nathan and Blake to get the story on some of their machines.

“We’re a very close-knit family, sports orientated and love spending time together.” he began. “Harleys are our latest passion - one that we have been into for six or seven years now. I first got into them and the boys followed. Josh is the oldest, Nathan the middle and Blake is the youngest.”

From there we started discussing the bikes.

Mark’s pride and joy is a stunning blue 2014 CVO Breakout. It was his first Harley and, “The one that you say that you are never going to sell, it will be handed down to my boys.”

The stock CVO arrived as a Stage 4 motor and he notes with a wry grin, “It was really quick to start with. But then I wanted to get things moving a bit quicker.”

The first of numerous improvements involved installing high compression pistons, then the heads were shaved and worked by Rams in Sydney, a 625-lift cam fitted, so was a 30-tooth pulley, a 58mm throttle body and Bassani turn-out pipes. “I really like sound of Bassani pipes, I think they are the best sounding pipes out of all of them.” He added.

But then, after riding it for a while he found it didn’t go quickly enough and he “got used” to the power. So the compression ratio was raised again, which did produce more horsepower, but developed less torque. It wasn’t as quick as a result so he opted for the 117 kit, had the heads reworked again to suit. It was all CC flowed tested and then sent it off to Fred at Dyno King.

Mark is enthusiastic. “He came up with the idea of running two computers and a quick-shifter. How it rides now, with that Quick Shifter is so lineal, the cam doesn’t seem as big as it is. Now I can upshift over 3000rpm flat out, and it’s like riding an automatic.”

The best time the bike had at the drags is 11.3 seconds. Mark noted that he is 110kg and rection time isn’t great. He’d like to get a “fast lightweight” on it to see what it can really do and maintains that under 11 seconds is entirely viable.

He says the best thing is, “The bike is super-reliable too.”

There are a few cosmetic changes. A two-inch tank lift “to get the lines just right.” The front forks have been extended two inches also to get the right look, it’s got adjustable hydraulic SAS rear suspension, and he made my own tidy tail. It’s also got KPI indicators all round.

Then he wanted to change the handlebars, “I didn’t want to go big high bars, so I copied my son’s drag bars on his V-rod. I headed down to Burleigh bars and told Zane what I wanted to do, which was run the hydraulic lines internally through the bars and they came up with a brilliant solution with a narrower custom-made set. It was unbelievably good service.”

He says, “I don’t think I could do much more to it performance-wise. The way it rides now with its strong, smooth lineal power is fantastic. Handling-wise, well, it still rides like a Breakout, but I’ve changed the rear tyre to the 260 for a more balloon look and am running a 120 on the front.

The next thing he plans to work on is the front suspension.

From there we stated talking about the beautiful White CVO Street Glide parked in the corner of the garage.

It’s a 2016 model with numerous modifications to make it, “Go and sound right”.

Mark bought it brand-new and was a decision that both he and wife Narelle made after test riding. He also bought a top box and had it painted to match. He says, “I rode if for a couple of months and decided that it wasn’t making the right sound, so we fitted Bassani headers and pipes, took it out to 117 cu.i, had the cams fitted and added some hi-compression pistons.

Joe Kovaks from KPI Industries worked with Mark to perfect the exhaust system and after doing a few rides following it I can attest that it sounds great.

In a familiar refrain, the ‘stock’ stage 4 CVO motor’s heads were reworked by RAMS and a 58mm Throttle body fitted. As was a 30-tooth pulley, “To make it rev a bit harder. Apart from the taller handlebars and mirrors that it. It’s all original CVO. I was just really attracted to this model.”

I pointed to another corner of the shed and asked, “So what about that lovely ’72?”

Mark grins, “Well, as you know, boys or men, we always want another Harley, so I bought that one for my wife for our 30th wedding anniversary. I wanted her to ride a sexy looking bike, so I bought it and had the bike delivered to her work with a big red balloon and ribbons. And she said … ‘What did you buy that for?’ It was just a special touch for our Anniversary, and that’s another bike I’ll never ever sell. I didn’t want to go to wild because it’s her bike.”

It’s been fitted with a “reasonable-sized” 595 cam, high compression pistons, the heads have been worked, Bassani system added plus a numerous chrome components. Mark maintains, “I do think it’s one of the best-looking bikes Harley have made with its old school look.”

At which stage I turned to the oldest brother, Josh, and said, “That’s one of the best-looking Rocker Cs I’ve seen.”

It started life as an ‘08 Rocker C that he bought second hand. “I bought it about six years ago. It already had the Dragon forks on it, triple clamps and it had a different CVO prowler rear guard to the one that’s on it now.”

Josh has added the fibreglass seat with white upholstery, changed to spoked rims and gone to a 260 section rear tyre. A succession of front hoop sizes were trialled, a 19, a 21, before settling on the 26-inch front wheel it is running now.

Then he installed an Air Ride rear suspension system and says, “It now handles a lot better. Low speed is still a bit poor, but when you get rolling it handles great.”

It’s also got a V&H big radius exhaust, new bars by Burleigh Bars were fitted and braided lines added. All the other tins have been painted up as close to stock colours as possible and under perch indicators installed. The ignition switch has also been cleverly modified, “So I can take the key out while riding.”

When asked what future plans he has for the bike, he too grinned, “I’ve got two turbos sitting in the garage waiting to go on, but with 2020 being what it has been, it’s all on the backburner for now.”

Nathan bought the bike brand-new in 2016 and it was the last white one for sale in Australia.

The finish on the wheels is called ‘Mutant Crystal’. Nathans says, “The problem with white bike and wheels is that the dirt and disc dust accumulate in the centres and it’s really hard to get your hands in to clean them, so we made that part black and then it transitions out to white.

When asked if there were any further plans for the bike Nathan said, “Either supercharge it or … move it on.

He describes riding it as “Pretty fast. It will pull eleven second flat quarters at the drags, and it’s very consistent. It will wheel stand on power, or if you slip the clutch it will light it up in first second and third.  But basically, I’ve tried to keep it simple.” He concluded.

Which the brought us to Blake’s machine.

“Yeah - I love getting out with the family on weekends or whenever I’ve got some spare time. Giving a bit of throttle ¬- it’s great fun.” He said with gusto.

“A lot of people might recognise my bike, it was built by Glen Taylor at Morgan & Wacker - and it won the ‘People’s Choice’ prize in the H-D Kings of Custom competition.”

It started life as a Softail Slim and was given the full dealer custom treatment to make it look like it does now.

It’s actually hard to recognise what it is ¬- or stated as. It has two-inch over forks, a twentyone-inch front wheel that is also an inch wider than stock, so it gives a much more balloon-like profile.  It has been fitted with a V&H Grenade exhaust system, has a custom white seat, white handgrips, CVO Mirrors, a tail tidy with bullet blinkers both front and rear, custom paint and a V-rod headlight.
The bars are off a Heritage Softail, and Blake says, “They are nice and comfortable.” It also had mid controls originally, but they were changed the to “forwards, to get that Harley feel.”

The motor is stock M8, “Which in this bike goes pretty hard. But overall it’s just a nice bike to ride.”

The clan also has two other project bikes on the go. Under construction in the back room is an 883 Sportster with a Turbocharger hanging off it and Fat Boy wheels that is going to be pretty special and quite unique when done.

There’s also a beautifully painted Craftech frame that “we’re going to run a 26” twin-disc spoked wheel on the front and are still deciding what motor we’ll use.” Says Mark. “Maybe a 131 crate motor.”
We’ll be keeping an eye on that one too.

It’s all in the family.