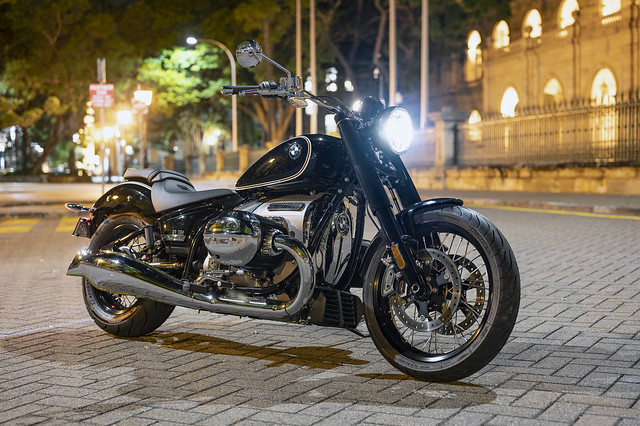 And now for something completely different.

There have been several European motorcycles featured in HEAVY DUTY over the years, Italians, Brits - and now, a German.

We were out by the Island waterways, cruising around the area between Brisbane and the Gold Coast.

Spook was riding the new BMW R18 for our photo shoot while I was on his bike. We stopped at some lights and as we pulled up he said, “You know, the riding position is just like my old Triumph Tiger.”

BMW calls it a “riding experience that is as cultivated as it is emotional.” That’s a bit too much hyperbole, but either way, I really enjoyed my time testing this motorcycle - and its ergonomics.

I was very comfortable with everything about the machine, and to be fair, I was actually a little ‘emotionally invested’ too. This bike took me to a very happy place, no matter where I rode it. It is not perfect, but it is a joy.

At first, I thought this was an example of BMW attempting to copy machines from Harley or Indian, but the more I looked into it, the more I found that it was actually a case of paying homage to their long and storied heritage and models like the classic R5.

From its unique swooping exhausts to the exposed shaft drive, to the slab-sided coffin tank, the styling cues come straight from 1936. But they have evolved into a well-performed, modern cruiser. The double-loop steel-tube frame and rear swingarm complement the styling too, as does the way the swingarm surrounds the rear axle transmission in ‘authentic’ style.

At its heart is an all-new, ‘old-school style’, air-cooled, ‘Big Boxer’ motor displacing 1802cc (110cui) with its 4 overhead valves per cylinder operated by push rods.

BMW claims it’s the biggest, most powerful Boxer engine ever, producing 91 horsepower at 4750rpm and 158Nm of torque at 3000rpm, with more than 150Nm on tap between 2000 and 4000rpm. Its 107.1 x 100mm Bore and Stroke are slung in a package that tips the scales at 345kg fully fuelled and it all adds up to a machine that is quick off the line with very good roll-on power and a delight on the open road.

It will happily purr along the boulevard at 50km/h in top gear or roll away distance at Freeway speeds with nothing but a pleasant pulse from the engine transmitted through the wide, cruiser handlebars that sit on small risers.

When we did stop at the traffic lights the side-to-side motion of the handlebars caused by those massive pistons going back and forth was reminiscent of an older Harley. The sideways kick that the whole motor gives when you start it up is substantial, and quite rewarding. “That’s ‘Powah!’” The EFI proved faultless.

The drive train is equally impressive, with a slick and sure-shifting 6-speed gearbox and a lash and slap free final drive. The hydraulically activated single-disc dry clutch is light and precise.

Opinions regarding the aesthetic of the exposed shaft drive and its universal joints were somewhat polarising, but I really liked it, along with the fact that it’s among the best I’ve tested - up there with the exemplary performance of the latest Rocket 3R’s for direct feel.

It also has a starter motor driven reverse gear option similar to that on a Honda Gold Wing. I didn’t employ it at all during the test, but lighter weight operators might find it useful.

Same with the other underlying tech. BMW calls its various systems MSR and ASC. It has Hillstart control, that acts like an automatic hand brake when stationary. I rarely employed it, but I did cycle through the three fly-by-wire ride modes available. It has ‘Rock’, ‘Roll’ and ‘Rain’ modes that adjust throttle, engine,braking and traction control responses exactly as you would expect the names to indicate. It’s a really good system that is changeable while moving.

Amongst its many features, the Automatic Stability Control system and MSR (Motor Schleppmoment Regelung) prevent the rear wheel from slipping as a result of abrupt throttling or downshifting. The ‘anti-hopping’ clutch is opened mechanically to prevent rear wheel skip. The system also prevents breaking traction on hard acceleration.

It all can be switched on or off via a button on the right-hand switch block if a burnout or other hijinks are on your agenda.

Naturally it has ABS on the excellent linked braking system with twin 300mm discs up front and single rear. Both sets have fixed 4-piston callipers. They are simply superb brakes.

Several of our riding buddies bemoaned the fact that forward controls are not an option, due to those massive ‘jugs’. But like the H-D Low Rider S or a Sportster, I quite liked its sit-at-the-dinner-table riding position. It made it easier to get a little bit of weight off-board to compensate for the bike’s limited lean angles. Unlike Harley, BMW doesn’t specify lean angles in their technical data, but they would be similar to that of a Fat Boy, or perhaps even a Fat Boy Lo. It’s very easy to get the large ‘Hero’ blobs on the foot pegs on the deck. They touch down well before any of the other hard parts.

The 49mm telescopic forks and cantilever rear suspension work in concert with its 1731mm wheelbase to give a sure footed and very comfortable feel on the road. The rear suspension is adjustable for pre-load.

The saddle is also comfortable for a long stretch and there will be taller seats and a wide variety of customising options available once supply chains recover from the Pandemic. Exhausts from Vance & Hines to Saddles from Mustang are available to order. As are touring accessories, bags and windscreens – which are fitted as standard to the ‘R18 Classic’ model.

The standard equipment on this bike is of a high order to begin with.

The headlight is unique and very effective. The test bike was fitted with optional adaptive lighting which has additional LED elements in the main headlight that are activated by banking angle. They shine down closer to the road when cornering. The other lighting is all LED and high tech. We did find the rear indicators that are set inside the brake and running light stalks a little hard to see in bright daylight. That was about our only gripe with the bike.

The circular instrument cluster features an analogue speedometer display and integrated indicator lamps that are “invisible” when not illuminated. It offers a wealth of information such as a digital gear indicator display and as well as the data from the integrated on-board computer. Trip meters, fuel consumption and a heap of other functions. It also has a prominent “BERLIN BUILT” inscription on the dial, as do the brake and clutch reservoirs, in case you forget the origins of this delightful motorcycle.

That’s indeed how I found the BMW R18 First Edition. Delightful. From the keyless fob to the kick of that enormous donk. It’s an entirely viable alternative in the Heavy Cruiser market with a heap of history behind it.

Back on the coast Spook summed it up, “The other bikes I’ve ridden for you, I couldn’t wait to get back onto my Breakout, I’m quite happy to ride this one.” If you know our pal Spook, that is very high praise indeed.

Riding the BMW R18 Cruiser I have ridden a few bikes and a couple for Dave's articles, but this one was very different.

I usually can't wait to get back on my Breakout, but this time, not as quickly. The R18 was something new to me, and I was keen to spend more time in the saddle.

There were several passes around a bend or roundabout throughout our time together, looking to meet specific criteria for the shots.

When it came time to relocate, usually I would jump back on my bike. This time I gave my keys to Dave and stayed aboard through some different riding situations through the canefields and a run on the freeway.

I can see what BMW is trying to achieve, and I think they have a genuine contender for this segment. The nimbleness of this big bike was great.

After changing riding style to accommodate the boxer engine, it really started to grow on me. Rock-solid through corners and change of direction under constant throttle, and surprisingly agile for a big bike.

There are three standard riding modes Rain, Roll and Rock, with Automatic Stability Control, reverse assist and Hill Start Control function. I tried all these modes briefly but personally settled on Rock, which gave me some additional poke.

I tried the reverse, but a little unusual for me at this stage. I am sure I would get used to it, but having ridden heavy bikes for some time, I tend to avoid the situations requiring it. I found the instrumentation very easy to see and use.

The most significant difference I found with this bike to others I have ridden was the acceleration. The R18 was happy to get up and go at the slightest invitation. Very smoothly, but quickly.

This performance, along with a very positive set of anchors, made me feel very comfortable with the machine's capability. Not my perfect fit, I do love my Breakout as you may have heard, but certainly worth a look if you are in this market segment and in my opinion, VERY BMW.