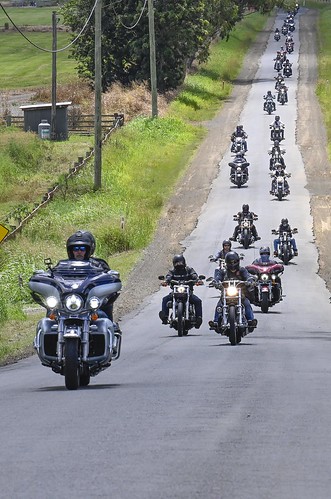 Another Chapter in our HOG Story

Dave’s at it again with the Morgan & Wacker mob.

“It’s only got 16km on the clock.” M&W’s Steve Shilling said as I was picking up their 2021 Road Glide Demonstrator.  I’d organised a loan so I could tag along on the Dealership Chapter’s HOG ride out to Queen Mary Falls and Killarney.

All I could really say was, “Thank you, I love this job” as he handed me the fob to the magnificent tourer finished in River Rock Grey Denim and Black on the Saturday afternoon prior to the run.

Naturally I took a very long way home from their Breakfast Creek showrooms.

It had been a while since I’d ridden a FLTRXS. The first thing I noted heading out over the inner-city bypass was how comfortable the bike has become. Particularly this latest incarnation’s plush gel saddle. Even for a tall guy it’s all-day good. Matched with the wide pulled back handlebars, footboards and efficient fairing it’s very easy to rack up big distances. Which is fortunate, because for the second time I’ve been on a HOG run recently, the Sunday ride was rather epic. Around 450km’s worth over a well-planned and nicely guided route in fact.

We met up at the Dealership in typically early Queensland fashion. After a round of greetings, registrations and Bacon and Eggs the ride briefings commenced.

The ‘New Chums’ got the low down first, followed by a general intro by the Chapter President, a run down from the Ride Captain and sage words from the Safety Officer. All with well-chosen messages designed to get 70 bikes and around 100 riders and passengers home safely. (It worked.)

I hooked up with ‘Skitso’, the Chapter’s photographer, and we set up to take photos and video of the group departing. We then made a beeline for the first stop on the route, the Canungra showgrounds. The two of us headed straight down the motorway while the main group took the more scenic route over Mt Tambourine.

As planned, we got there well ahead of the pack and set up with our cameras on either side of the flowing causeway that lies directly east of the Showgrounds. A nice, picturesque spot where we’d be able to get a handsome backdrop of the bikes passing by. Unfortunately, the group rode in from the south and by the time we scrambled our way up to the gates most of the throng had already parked up. We could only look at each other and laugh. Doh!

After a leisurely stop at the Showgrounds and group photos, the pack made their way over the somewhat uninspiring run out to Rathdowney. From there the roads started to get a bit more interesting however.

The photographic corps (Me and Skitso) again left before the main group and found suitable locations for some ride-by shots on the back road through Biddabuda.

I caught up to the group just past Beaudesert.

The catching-up was the first time I really got to give the Road Glide its head. Up until then it was a mix of freeways and city roads - which the bike devoured in comfort and style, but didn’t provide any real challenge to its capability.

The Biddabuda road on the other hand is narrow, rough, and tight in places with blind corners cresting the rolling hills.

Spooling the big 114 cube up to its happy-torque zone between the bends, then washing of speed with it’s very nice ABS and dropping it into the ripple-surfaced right and left-handers really did bring home how far the performance of the Harley Touring rigs has come.

I wasn’t going ‘stupid-fast’, but towards the turnoff to Beaudesert I did catch up to a cop in a 4WD a lot faster that discretion would normally allow. The bike is that capable - I had the stereo cranked and was really ‘zoning’ - loving every minute of throwing it in. Then I rounded a bend apace, looked ahead and … “Oooh! That’s a cop”.

By the time we were on the plains heading south of Rathdowney I was firmly attached to the back of the pack. The HOGS rode at a good pace - and well. There were no incidents at all on the day and we covered some reasonably challenging roads in good time.

Some of which we encountered after we wheeled west to make the tight and twisty ascent to the Queen Mary Falls and the lush green tablelands that lie beyond.

Just past the second of the shallow water crossings at the foot of the climb I stopped to take photos again. This time catching up was even more serious fun. The climb to the falls is narrow, steep and full of low-speed, tight hairpins. Not the sort of road that a Harley ‘used’ to revel in, but the big Road Glide really was quite outstanding.

The touring chassis with its good suspension and that glorious torque meant punching it up the gradient was an absolute joy. The ground clearance in particular surprised me. I was climbing off board somewhat; sliding a buttock off the saddle and getting a knee ‘out’ but I didn’t touch down once. Brilliant!

Past the turnoff to The Head, the landscape opens up and the rolling tablelands with its joyous snake of a road were a stunning shade of late-summer emerald green.

Then the terrain gives way to long tunnels of sub-tropical rainforest where more tight and twisty going ensues.

I caught up with Skitso just at the start of the long descent to our destination at Killarney and we had a great run through to lunch at the pub.

It’s a good place to stop, the Killarney Hotel. The food is good, the service is pleasant, the beer cold and the verandas are wide.

It’s here that I really got to appreciate why HOG enthusiasts are what they are. There was a lot of happy people at the pub, all with a common interest and full of mutual respect. There were raffles, prize draws and a hearty rendition of ‘Happy Birthday’.

The Pub did struggle with the sheer size of the group and it was well into the afternoon by the time Skitso and I cleared out ahead of the pack to set up for one last photo spot.

From Killarney the plan took us over the Stock Route to the Cunningham Highway and a ‘Farewell Stop’ at the Roadhouse at Aratula. Going down the hill through Cunningham’s gap was the only dark spot on an otherwise perfect day. 10kph down the long descent in a huge line of traffic stuck behind a very slow-moving truck was painful.

But that was soon just a memory as more raffles and prizes, laughing and a lot of happy HOGS left the farewell stop quite late in the day and headed back towards Brisbane in much smaller groups.

We get that the HOG thing isn’t for everyone. Some people don’t like their rides to be so timetabled or scheduled.

But if you do prefer a ride that has been well organised, scouted, had due consideration for safety, is very social and welcoming to Harley owners - then it’s a very good thing. The two HOG runs I’ve been fortunate to attend lately also dispelled any doubts that they don’t ride far - or fast.

This one was quite epic … again. And very enjoyable.

I returned the Road Glide to Morgan & Wacker the following Monday with well over 500km on the clock. I described the way it handled everything the ride threw at it as, “Magnificently.”

Freeways, country byways, mountain roads and the rough and tumble; it was comfortable, capable and sounded fantastic. Not only the pumping stereo, but the note from the sweet Vance and Hines exhausts that have been fitted too.

“It’s got a few more than 16km on it now Steve.” I said as I filed my report - and hinted that HEAVY DUTY was looking forward to the next opportunity to mix with the HOGS.

And if you are in the market for a very accomplished, large Touring motorcycle, have a crack at a 2021 Road Glide. It’s a peach.