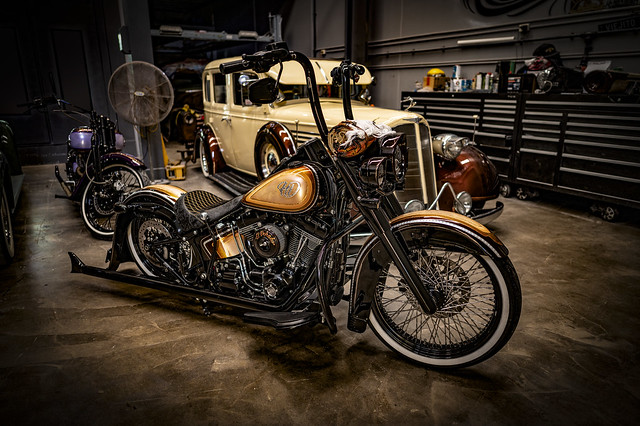 El Hombre Dorado ("The Golden Man") was the term used by the Spanish in the 16th century to describe a mythical tribal chief who, as an initiation rite, covered himself with gold dust and submerged in Lake Guatavita. The legends surrounding El Dorado changed over time, as it went from being a man, to a city, to a kingdom, and then finally to an empire.

Like the legend, Casey’s version of ‘El Dorado’ has changed significantly over time.

“It started life as a Softail Slim S”, he began as we sat down in the office at ‘Livin’ Loco Garage on the Gold Coast.

He was there to collect the bike from the shop’s owner, Nathan, who had just finished the amazing paint job the bike now sports, and we decided to get the low-down on this classy low rider before we headed out for the photo shoot.

“The way it all started was I’ve always liked those Chicano style. I like the car side of things. The Impalas, the Lincolns and all those low rider style machines. So I wanted to build a bike around that. One of my mates, Tom Hernandes from ‘Hernades Cartel’, wanted to get into bike building on a larger scale, so I leant on him for advice on how to go about it. Because I wanted to keep the primary colour of the motor mainly black, he convinced me to go for the Softail Slim, because the motor was blacked out as standard.

From there the build started. I bought the bike back in November 2016, brand new from Mark Harris at Harbour City Harley-Davidson and it was put straight on the truck and went to Tom’s workshop in Mundoolan, South West of Brisbane. I didn’t even get to ride it.

There the process began. I had a lot of images and ideas from bikes I’ve liked over the years so I sent them to Tom, and because he’s very familiar with that scene, he advised me on what was possible and what would work best - and I have to say it turned out great.

There was a lot of detail work too. Take the Fenders for example. On a lot of bikes the front fender doesn’t cover the rim and the rear comes down and tucks, but I wanted that more swooped out, melted look, so Tom sheet-metal fabricated them by hand. The number of hours he put in to getting the look just right was incredible.

From there Tom custom made the centre stand with a suicide shift arm to work with the Shotgun Air Ride suspension.”

It’s really impressive with the way the stand works. Push the shift arm, it lowers the centre stand and lower the bike onto the stand with the air suspension. It’s simple but very effective. The bike came on and off the stand dozens of times during the photo shoot.

The bike’s stylish fishtail exhaust system is by Samson and the handlebars are Carlini Gangster apes with internal wiring done by Hernades Cartel.

Casey reckons, “I can’t recommend the work from Hernades Cartel highly enough. The effort Tom put in is incredible!”

The great looking saddle was reshaped and upholstered by CKT Custom Trim in Melbourne and the front forks were fitted with Arlen Ness hot legs - with hidden axle bolts and lowered springs for a streamlined look.

That look has been enhanced with DNA Wheels and hubs. It’s running a 21-inch front and 18” rear with 80 twisted spokes. The wheels are shod with classy looking white walls by Vee rubber.

From there Casey swapped out the single headlight for the triple light array with daymakers inserts from a Softail Deluxe.

Then the bike went to Alpha performance engines who installed a SE204 cam kit and dyno tuned the 110 cube beauty.

Then we came to Nathan at Livin’ Loco to discuss the paint.

Casey began, “I’ve always liked the creams and the golds and the rum colours, but I wanted something that is going to be timeless, something that can enter a show today, and also in 5 years’ time and still look classic.”

Nathan took up the story, “Yeah, Casey gave me the colours and the theme he was after. A lot of my work is inspired by the low rider stuff and the Viclas scene is based on the low riders. The paint on this bike was quite an (expletive) process. I reckon there would be easily over 40 layers of paint on this bike - just to fill all of the edges. All of the silver leaf is white gold, because white gold won’t tarnish, then there’s the variegated leaf with the warmer tones, reds, and purples and greens and the earthy tones. It took more than 3 weeks to finish.

“It has been a long process overall,” Casey continued. “It’s taken around four years to get to this stage, with the FIFIO work I did as a scaffolder, making the move home, starting a new career in mining, getting married and just ‘life getting in the way’ … this is actually the first time I’ve ridden it any distance. I’m going to jump on it now and ride straight to Gladstone.”

“Any further plans for the bike?” We asked.

“It’s interesting. It is a show bike, but it’s also my toy - so it’s going to be ridden, not hidden. It’s going into a few shows coming up, a few local shows and I’ve entered it in the Rocky Nats as well, but any sort of show – the Aussie Viclas have invited me to come down to a show in Albury-Wodonga too. I’m quite proud of it and it will be good to get it out these and show the craftmanship and the work that the boys have done on this bike.”