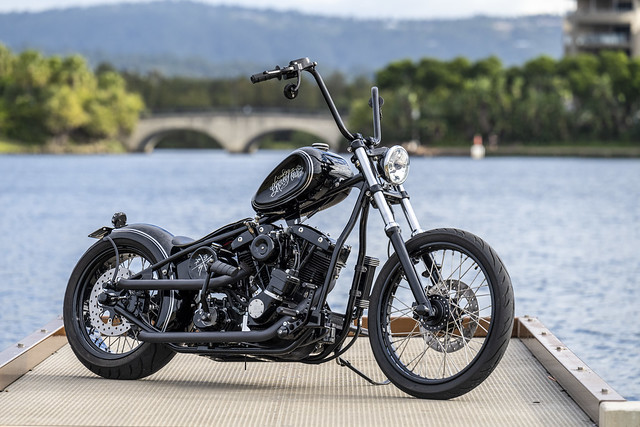 Another sweet custom ride from the Gold Coast.

We met Steven Hughes from ‘Sugar Shack Motorcycles’ at the bike show on the Gold Coast and were impressed by the range of bikes he had on display. Amongst several standouts was this beautifully executed Shovelhead chopper.

A few weeks later I sat down with him in his Nerang workshop to get the lowdown on this classy build that ‘mostly’ started life as a 1976 FXE Super Glide 1200 but has been significantly upgraded with S&S, genuine Harley and performance other componentry.

“The build is around five years old now.” He grins. “I pieced it together from 2 motor cases and two heads I bought from America. Ollie Logan helped a lot too. He’s a good friend and he set a lot of the bike up. Many of the parts in the bike are from Ollie as well … stuff he’s collected over the years. The modified lifters for example.

So, now it’s an 88-cube Shovel running S&S three and five eighth inch barrels, 10.8:1 compression pistons, it has Evolution chrome-moly flywheels (that they only made for two years), you’ll also notice that it’s running an Evolution oiling system that pumps the oil up through the pushrods, instead of through a line in the standard Shovel configuration. It also has S&S roller rockers, a custom S&S ground camshaft …” Steve pauses. “Pretty much everything you can do to a that motor has been done to it.”

“What sort of power does it make?” I asked.

“It hasn’t been on the dyno, but I’d estimate it’s making around 100 horses.” He grins again. “And it’s a very lightweight Harley, well under 200kg … so it goes pretty good … yeah … pretty good.”

The Ignition is a Morris M5 and was the first one sold in Australia. “It’s the Billet one, which I paid a lot of money for, it runs points and coil on the magneto.”

Steven made the custom exhaust system in-house and it’s fed by a Mikuni 42mm HSR “Which I painted as well. The manifolds are Mikuni from T.D. Hatricks.”

Steven proudly notes that he did all the paint on the bike himself, “It was a raw metal so I painted it with Harley textured paint.”

“They are beautiful looking heads,” I commented.

Steven grins again, “They really are. They are 66 generator Shovel Heads. They are the nicest shape rocker boxes. Again, they were done up by Ollie and they have black diamond valves, S&S Roller rockets, the barrels, and a heap of other performance components. It goes really well.”

The gearbox is a 1984 4-speed castle top out of the first Softail Standard. It has a long main shaft and they are pretty rare to find these days. A lot of builders run ratchet tops, but I’ve never had any trouble with this castle, and it selects gears a lot better that a lot of ratchets.” As he points to the bike.

“Dave this thing when we go for a ride, it’s easy to select, and the ratchets are so sloppy, while this unit is tight.” I took notice when we headed out for the photo shoot. He was right ¬¬– it was impressive.

“It’s a 3-inch BDL Primary and chain final drive. While the forward controls are from Speed Dealer customs. I really liked the look of them, and then it has a Jag oil cooler that I got from Rollies too.”

Then we talked about the chassis.

“I bought the frame in from America as well. Harry at Harry’s Bikes in Brisbane helped there. It’s a Paughco frame that didn’t originally look like it does now – I changed it up somewhat, cut and modified it to make it individual. I guess you could say that ‘Indian Larry is my, kind-of hero – so I wanted that look and tried to emulate his style. I fact when I started with this build, I thought ‘I’m going to black it all out’ – and they beat me to the punch and released their murdered-out shovel a month before I finished this one! I didn’t even know they were building it. But anyway, this is my interpretation and I’m happy with it.”

The headlight is from an early model Breakout while the braided lines and handlebars came from Rollies. It has a Performance Machine master cylinder and controls that are internally plumbed with an Exile Cycle hidden throttle. All of that sits on Roland Sands risers.

The setup gives an incredibly clean and uncluttered look to the front end. The line of the bike is also complimented by the Paucho fuel tank that Steven modified to suit. All the pin striping and paint was done in-house. The saddle is also his own fabrication, “But it needs to be re-done. It will eventually have a much nicer black leather seat.”

The front end is from a 2011 Sportster that he painted and fully rebuilt. The wheels are also custom built. The front is a Sportster Yoyo hub with stainless spokes laced to a 21” Wide Glide black rim, it runs the Sportster front disc brake as well. The rear wheel hub is from a 2013 Softail Slim with stainless spokes laced to a 5.5” rim from Rollies and that was powder coated gloss black as well.

At which point I suggested that we should head out a get a few photos.

The first things to impress out on the road was that throughout the photo shoot the bike started first kick every time. Then, when it did spring into life it had that unmistakable Shovel sound, but with all the performance improvements it sounded like even sweeter honey. Loud honey, but sweet nonetheless. When he did give it a handful it really took off in a hurry.

The gear changes were reliable, and its road presence and presentation were exactly what attracted us to the bike when we first saw it.

Steven calls the shop the Sugar Shack for good reason. It is the house of some sweet rides.