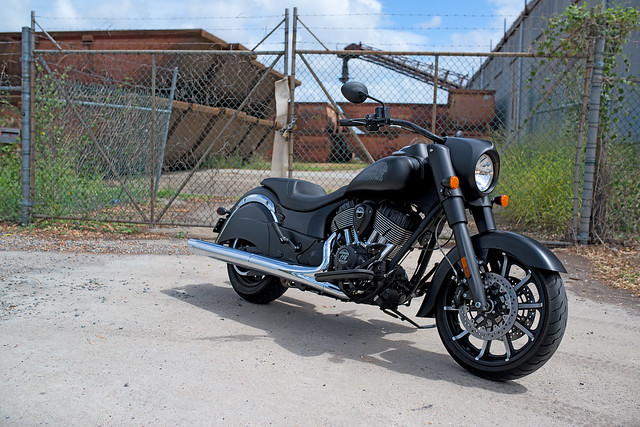 Dave takes to the streets on a hopped up Chief.

The English punster Tim Vine once quipped, “Black Beauty – he’s a dark horse.” After the crew at Indian Motorcycles in Brisbane’s suggested I might like to take their 2018 Chief Dark Horse fitted with a Stage III upgrade for a ride I came back thinking “Now this is really is a Black Beauty!”

This is the fourth example of a Dark Horse I’ve managed to have a decent run on and it’ easily the most impressive. Going right back to Heavy Duty Issue #143 and the feature on the then-new model - and subsequent saddle time spent in Stage I and Stage II examples since - I was already quite enamoured with the machine, but the Stage III build takes it to a new level.

Indian defines a 111 cube Thunderstroke ‘Stage 1’ build as the addition of Pipes and Air cleaner with a re-flash of the ECU. ‘Stage II’ then adds high performance cams and ‘Stage III’ adds the 116 Cube big-bore kit.

That first Dark Horse I rode was in bog-stock trim and like most new off-the-floor models it really felt like it could do with some help ‘breathing’ at higher revs. The Stage I partially fixed that and Stage II meant that it breathed even heavier for much longer - and really felt like you could tap it out well past maximum power.

Going to the 116cube Stage III build moves power and torque further up the rev range and opening up the throttle at launch sees the front end get quite light as the machine really surges forward. It didn’t feel like it would need much encouragement to wheelstand.

Conversely, cruising around town meant that it might need a gear lower than the stock build to stop any lugging at 60kph - and at highway and freeway speeds the engine does develop slightly more vibration, but it’s negligible and it remains very smooth for a large V-twin with only a ‘pulse’ transmitted through the bars and footboards.

But the upsides far outweigh it. Top gear roll on and acceleration is crisper and lays the rider back in the saddle noticeably. And of course there is launching it. I spent much of the test ride detouring to the Freeway on-ramp just for the joy of giving it a real handful. Fuel consumption probably will increase accordingly, but that’s more the fault of wristwork on the throttle rather than the machine.

This example has also been fitted with a 19” front wheel and front guard from the Indian accessory catalogue. I didn’t really notice much difference in the road manners; it still remains a remarkably nimble and chuck-able machine for one tipping the scales at 346kg wet. If anything the cornering clearances are even better with the bigger hoop fitted and the ride remains stable and it won’t change directions unless you tell it to.

Also upgraded are the saddle (off a Chieftain) and some other bling like the levers and footboards. The relaxed ergos and sit-at-the-table riding position mean it’s a bike that I could sit on all day.

With the lumpy cams and six-shooter pipes it’s also a bike that I could listen to all day. It’s a lovely note, either hard on the gas or winding it down through the cogs to stop at the lights.

As noted, when you do give it the business away from the lights the traffic gets very small in the mirrors in a most satisfying surge due to the 20% increase in torque and around 15% increase in power – over the stock unit.

Indian have got some killer deals going on the upgrade at the time of publication too. If you buy any new model from their existing 2018 range they will include the 116 Big Bore Kit and installation for Free – that’s an added $5,250 value. You will still need to add the Stage I pipes and high flow air filter at around $2,500 fitted.

If you already own a Chief model they will supply and install the Stage III Kit for $4,250 - $1000 off the RRP and assumes you already have the pipes and air filter installed.

It’s a well-worthwhile investment if you are looking to add a real edge to any Thunderstroke 111 equipped Indian.