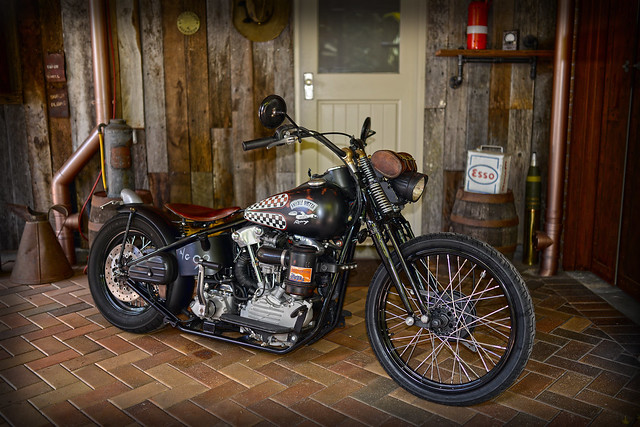 The ‘Knuckle Duster’ is the third of Al Magarry’s immaculate builds to feature in Heavy Duty.
It follows his superb Military WLA and the memorable ‘Model U’ US Navy Shore Patrol restorations and this classic bobber has received the same fastidious attention to detail as the previous builds.

We sat down with Al in his workshop in the north of Brisbane and talked about the bike.
“I’ve always wanted a Hot Rod and this was the chance to build it” Al began. “It’s a 93 cube S&S Knucklehead in a Kraft Tech Inc. Hardtail frame with Genuine OEM 45 Knucklehead springer forks.

I added a big Keihin flatslide carburettor to get a bit more fuel and air into it, to make it go a bit harder. I also found an original WW2 Knucklehead oil bath air cleaner that I modified again to get enough air into the engine and to help make it look ‘old school’. I also fitted an original 1915 Harley ‘Pup’ seat that fits the character of the build nicely.”

Al says, “The bike was essentially complete when I bought it, the motor and gearbox were virtually brand new – but it didn’t look anything like it does now. It didn’t have a dash or instruments, just a flat tank, so I built the dash, added the Springer front end and genuine Harley handlebars, then I started work on the other upgrades.
The previous owner had done some work on the bike and had made nice brackets to fit a lot of the components so nothing looked like it was bolted on haphazardly and there was a lot of work already done to make it ‘period’.

The footboards and exhaust system were custom-made for the bike. But it had a pretty crappy little seat and headlight on it that I upgraded straight away. It had been build more for mechanical integrity rather than the aesthetics of the bike, but I set about changing that – without compromising the mechanics.”
“It’s running a 21” front wheel that I built – the first time I’ve done that – and that was a real learning experience. It has the original 1945 star hub and a 16” rear wheel with an original Shovelhead hub.”

We then talked about the riding experience, “Riding this bike is different to the other builds you’ve featured in Heavy Duty. It’s not like the WLA or the Model U, in so far as it has an automatic timing advance – it’s a hot rod motor, so it’s all about the performance. That said, it’s got drum brakes on the front, but it’s got a Brembo calliper and a floating disc off a 2016 Breakout on the rear. It actually had a telescopic fork front end when I bought it, off a CVO, but that didn’t suit the period look I was after either. The handlebars are off a late model Harley.

But really it’s a beast. It goes hard - for an old-style bike it goes really hard – and that was a problem with the suicide clutch that was originally fitted with all the, grunt it has now it was actually a bit dangerous. So I fitted a proper Knucklehead rocker clutch and that made it a lot more comfortable to ride. Before it was like a car clutch, you pushed it in or let it out and that was it, you had to keep your foot on it to keep it engaged. So you couldn’t pull up at the lights and take your foot off! But with the rocker clutch you can, and I thought that was a worthwhile modification that works a whole lot better with the four-speed stick shift gearbox.”
“Talking about the gear stick …” Al said as he went back into the workshop and produced a set of brass knuckledusters that had been converted to work as the gear knob. “I’d like to use these to fit with the theme of the bike too, but I don’t think the Police would be too happy, so I moulded the custom Brass Skull gear knob to suit. That took a surprising amount of work.”

We then got back to the subject of the riding, “The cornering clearances are pretty good for a Bobber. The Footboards are hand made and they have been mounted quite high on the frame and they go with what is reasonably good handling. It’s low to the ground and has a low Centre of Mass so it chucks around OK. The frame is raked so the Springer Front End sits lower than standard and that helps too. So too does the strength of the Kraftech frame, it’s well engineered and there are 4” springs under the bobber seat. The whole package is surprisingly comfortable to ride on normal roads. If you hit a big bump you know you’ve hit it.” Al adds with a grin. “But I could happily ride it all day and not feel too bad at the end of it”.

We than asked about the Unique paint on the bike, “I hand painted all of it with PPG acrylic with a Cerakote ceramic flat clear coat over it. It took quite a lot of work, hand pin striping and masking out all the designs and checkers – there was about 12 hours work just in masking, but it is all hand applied, there are no decals or printing. The exhaust, handlebars, dash, headlight, rear guard, callipers, rear disc and front drum are all ceramic coated too. I also wrapped the exhaust to fit the look.”

And fit the look they do. It’s a fantastic looking – and sounding – build. The raucous rumble of the Knucklehad sounds brilliant at speed and the lumpy S&S cam sounds equally brutal at idle.

Al’s calling the Knuckleduster complete and is setting about enjoying riding it, while we’re already looking forward to his next project – number four for Heavy Duty maybe.