"Gonna have fun in the city
Be with my girl, she's so pretty
She looks fine tonight
She is out of sight to me
Tonight I'll spend my bread, tonight
I'll lose my head, tonight
I've got to get to night"

My first experience with a Heritage Softail was following Bob’s ‘96 model around the Hunter Valley and Northern Rivers of NSW for the last few years of the previous millennium. 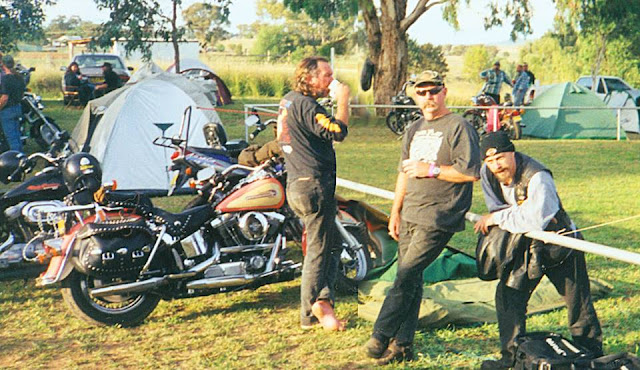 It was always in pristine condition and Bob and his brother Alan always set a cracking pace as 'road captains' on our regular weekend runs up the Valley and beyond.

“It’s f***ing Salmon!!!” he would glower at us, along with assorted threats of violent retribution - if we were ever game enough to call it pink - at any of the pub stops we frequented along the way. Halcyon days.

It wasn’t until 2011 that I managed my first decent ride on one – and it turned out to be a minor epic. 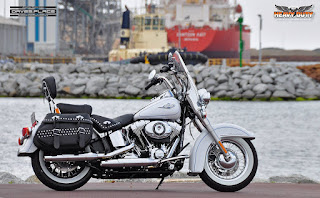 I’d thrown a leg over a few shop bikes and had one as a day-loaner in between, but in November ’11 Harley flew me, Brum and several other magazine types over to Perth to meet up with Bill Davidson and a ride down to Margaret River for the annual HOG Rally.

After photographing the first two days of the HOG shindig the Co-pilot arrived in the ‘Golden West’ and we set off, 2-up, charged with producing a touring story and travelogue for the HOG Magazine, aboard a magnificent white 96 cube model.

We covered almost 1,500km through the bottom corner of the state in a few days - in great comfort and with tons of style. And that’s where the Heritage was entrenched as one of my favourite ‘do it all Harleys’. It cruised, it toured and it ‘show-biked’ eminently well. 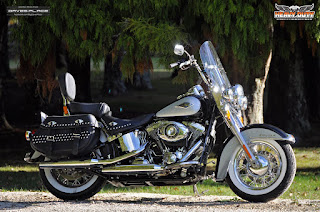 Then in 2013 I was dispatched to cover the HOG Rally in Auckland for Heavy Duty. My ride for that weekend was a 103 Cube Silver and Blue Model. The improvements in the bike were noticeable: more power, torque and responsiveness - and I rode the wheels off it for the duration of the event.

Fast-forward to 2014 and a gorgeous Silver 103 Cube landed in my garage and I spent a week riding it around Brisbane and the Gold Coast Hinterland - and loved every minute of it.

I always thought appreciating the Heritage was a mindset and I enjoyed the connection with the brand’s history and aesthetic. 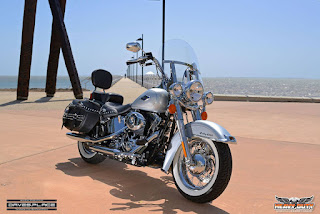 I didn’t mind it dragging the footboards or its moderate lean angles when hooking in, I was always too busy feeling good about riding it and the way it purred along the boulevards to worry about going ten tenths.

And all *that* is why this Friday is going to interesting. A 2019 Heritage Classic, replete with the latest incarnation of the 114 ‘coooobic’ inch Milwaukee 8 engine has arrived and is currently being serviced at Morgan & Wacker, Brisbane in preparation for collection as a Heavy Duty Magazine test bike.

Very interesting indeed – I have some benchmarks and history to compare it to - I’ll keep you posted and blog some of the test rides and impressions. Full test will be in Heavy Duty # 164 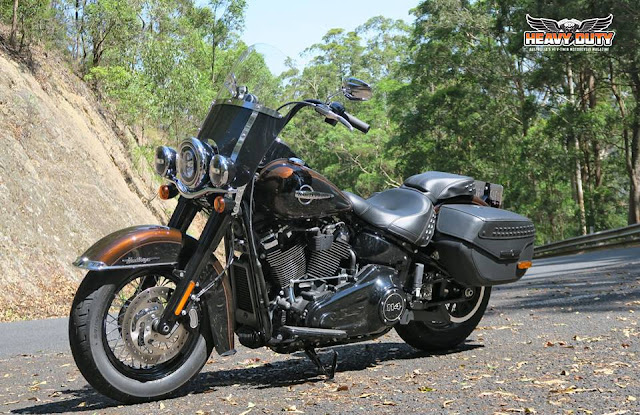 I was well into my maiden voyage aboard Harley’s 2019 Heritage Classic when Neil Young’s Timeless Classic spooled up in my earpiece.

If you want a recipe for transporting yourself to a very, very happy place, take that song, add a dash of this bike and roll in the road over Mt Glorious, west of Brisbane - and you’ve got something you could bottle.

It turned out I collected the 'Rawhide and Vivid Black' 114 Cube Classic from Morgan & Wacker this morning. It worked out easier to get a lift in today, rather than yesterday as previously mooted.

After collection I was going to do a few errands around town before heading home - but by the time I got to Oxley and finished the to-do list I thought, “Well … stuff it. May as well keep going.” 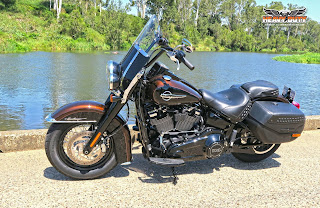 Before I knew it I was at Fernvale and heading for the hills and a rendezvous with an Iced Coffee at the Mt Glorious Café. I have to say, I was enamoured with this bike, right from the get-go.

By the time I cleared the dealership and headed uptown I knew this was a machine that I was going to *really* enjoy. Even for a big guy like me it is super comfortable and feels quite roomy. The motor in this one is exceptionally smooth too. I’ve tested some 114’s that shook more than others. This unit is as good as the original Fat Boy I tested and noticeably smoother than the 114 Breakout.

It would benefit from Stage 1 treatment at least, but even still it chugs along very rewardingly.

On the M2 Freeway I dialled in the cruise control and the bike was a delight. On the open road sections before and after Fernvale the chassis and suspension package soaked up the worst of the truck ruts and potholes on offer. I even gave it a quick squirt up a dirt road by Wivenhoe Pocket and it’s quite capable there too (belt drives notwithstanding). 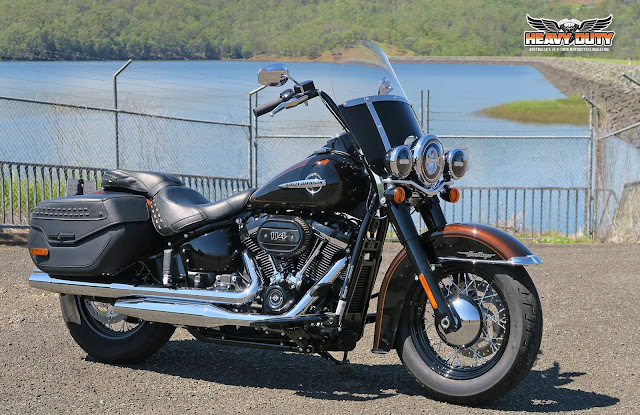 The combination of 130-section front and 150 rear makes for what I think is the most sure footed and nimble of the Footboard equipped M8's. It chucks around beautifully and feels very, very planted on the road.

On the twisty bits up the hill to the Café the ground clearance proved OK – not as good as the FXDR – the last bike I punted up there, but better that a previous gen. Heritage Softail – quite a bit better in fact. 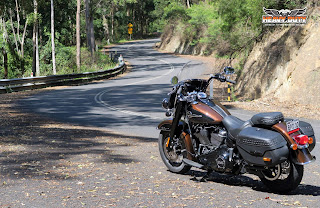 On the 30kph signed corners the footboards had the gentlest of kisses on the tarmac at 60kph and the 20’s were fine at 40-45.

Coming down the hill was equally enjoyable. The brakes are really good. The last bike I rode that could be this easily ridden with genuine one-finger lever action was a sportsbike. They aren’t ‘brutal’ stoppers – but they are very good and require minimal effort.

Back across town in the mid afternoon Brizzy heat the bike didn’t stumble or fart once. The gearbox is excellent too – sure-shifting and confidence inspiring, in fact the whole package is. I got home mid afternoon grinning like an idiot.

Looks-wise, I like it a lot. I don’t think it’s quite as aesthetically pleasing as the Anniversary Heritage Softail that Mick was coincidentally picking up from M&W at the same time I was collecting the Presser, but the Classic is appealing to look at nonetheless.

I know it’s a long bow to draw, but from some angles it reminded me of Al’s perfect WLA – probably due to the blacked out lower screen.

Anyway, that’s the first impressions. More to follow. Maybe a decent fang down the coast tomorrow.

Part III: Running Down a Dream.

"It was a beautiful day, the sun beat down
I had the radio on, I was drivin'
The trees went by, me and Del were singin'
Little runaway, I was flyin'"

Tom Petty’s 1988 Classic was today’s playlist ‘eargasm’. If I could dance and ride at the same time I would have.

Tom popped up while I was rockin’ the Heritage Classic around the delightfully named hamlet of ‘Woongoobla’. 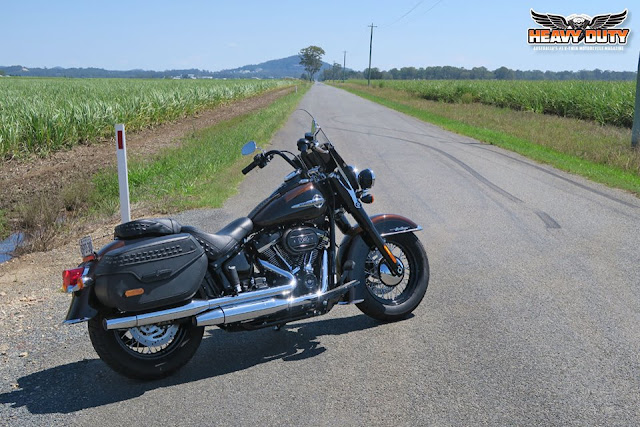 It's situated in the coastal corridor of cane fields and prawn farms that lie East of the M1, between the upper reaches of the Gold Coast and the Southern Bay-side Suburbs of Brisbane - and it’s actually not bad riding country. It is coastal-plains-flatland, but there are some good corners to be found and some nicely empty back roads running through the cane. The posted speed limits aren’t stupid-slow either.

The late morning temperature was already well into the 30’s by the time I wheeled the Heritage onto the M1 near Loganholme with light winds and clear skies prevailing.

I’m still quite surprised by just how comfortable the new model is. For those that don’t know me, I’m 6’5” or 195cm in the new money and big. I can get by with a stocker, but normally I need a Harley ‘Extended reach’ saddle on a Road King or Street Glide for optimum comfort.

Even on older model Heritage Softails I was pushed a little closer to the handlebars than I’d ideally like by the big bolster that separates the rider and pillion accommodation. All easily fixed with a visit to the accessory catalogue of course, but so far, on two reasonably decent rides, I’ve been perfectly comfy on the new model throughout. No need to change it at all.

The legroom is really good too. I could stretch out ‘tres’ comfortably on the big footboards on the way home and the mini ape handlebars work to complement it all very well. Lounge chair comfort. My daughter’s first comment after watching me pull into her driveway for a quick visit this morning was “That looks really comfortable”.

The point is it will work for us big units, conversely, shorter inseams will have no trouble flat footing it with its 680mm saddle height and they should be even more luxuriated.

The only thing I’d change to suit the taller gent is get a slightly taller – or shorter - windscreen. The buffeting at helmet level isn’t too bad, tolerable, but shifting the dirty air up or down a few inches would make the ride and ergos absolutely ideal. Normal height riders should fit nicely in the bubble. I’ll remove the screen entirely for the next ride – it only takes seconds – on or off. It's a very comfortable bike. 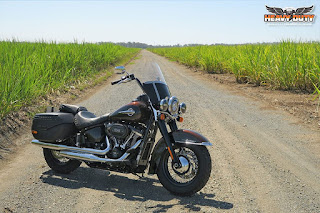 I headed up some back roads through the mangroves out to Rocky Point - getting ‘close' (well ... sort of) to Adventure bike-type riding conditions and the Heritage was as sure footed on the busted up tarmac as it was on the sweepers - and had a few quick ‘blats’ up the dirt cane roads for good measure.

I used to be able to bottom out the suspenders on a 103cube without trying too hard – even after going through the rigmarole of beefing up the preload.

I’m saying, “The suspension is very good and matched with the new chassis and torque and power of the 114 engine, this is a tight handling pleasure to chuck round.”

It’s still a foot-boards cruiser-tourer though. The lean angles are a Heritage’s: 27.3 and 28.5 degrees. If you ride it anywhere near its handling capability on a typical roundabout the foot-boards will hit the deck. It’s a Heritage. But the sweetest-riding one I’ve yet encountered.

I zigzagged back through the cane, headed out to Jacob’s Well for a photo stop, did a bit more back road-ing and a highway jaunt back to Stapylton - with a quick stop at the Gem Hotel. 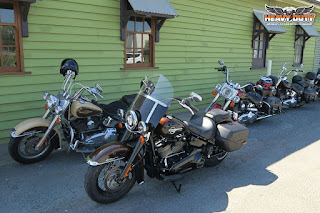 I stopped at the Pub for a Coke on a hot day, but mostly because there were already three Heritage Softails parked in the shade by the side door. Two of them were travelling together and two of us were there by happenstance. After a quick chat and Q&A session I was back on the M1, cruise-control dialled in and seriously digging some torquey-smooth sweetness.

“Goin' wherever it leads
I'm runnin' down a dream”