Dave has a first-hand look at two takes on a three-wheeled theme. 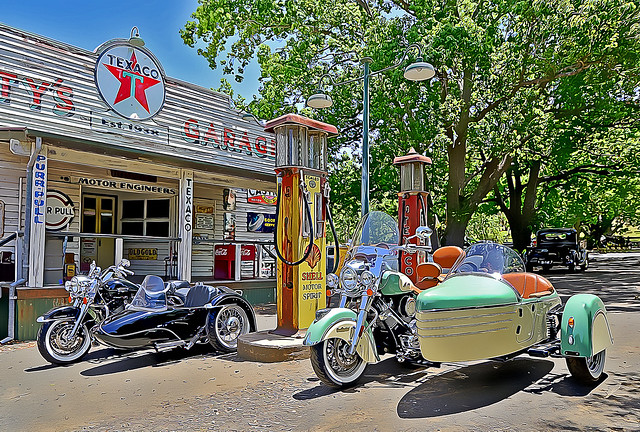 Stuart Topp and his son-in-law, Mick Tattersall, share a common interest in uncommon motorcycles. They both have a passion for three wheelers - but we’re not talking about trikes, they are sidecar enthusiasts – so much so that they are making a business out of transporting tourists around the Sunshine Coast, Hinterland and Moreton Bay Region on them.

I met up with this pair of three–track mindsets at ‘The Barn and Scotty’s Garage’ near the foot of the Toowoomba Hills for a photo shoot, a chat about the ‘chair’s’ famous history and a ride on their unique machines.

Stuart took up the story over coffee in the Barn. “Mine is a 2017 Indian Chief Vintage and the sidecar fitted to it is a DMC Sidecars Tomahawk SE – which is a modern-day take on the Indian Princess (sidecar), one that was made back in the 1940’s and 50’s and proved to be very popular.
I was looking for a rig to start our tour business and saw this combo advertised for sale. At the time we were looking at buying a Ural, but found there were too many problems mechanically with the units we inspected.
But when I saw this Indian combo being sold as a deceased estate I knew it was the right machine. The owner had bought the bike and chair individually, but had passed away before the sidecar could be fitted, so I bought the kit and had it assembled. The sidecar was still in its packing crate – exactly as it came from the manufacturer in Washington State. Mick and I drove my 4WD and Trailer down to Gosford in NSW and picked it up.

The process of fitting the sidecar was time consuming. I took it to One Ten Motorcycles in Caboolture because they have some sidecar specialists on staff and they did the mechanical hard yards - but had trouble getting the electronics right. Fortunately my background is in electronics and I sorted the indicators and electricals myself. It was already painted, finished and what you see now is how it came out of the box.”

Then I asked Mick about the beautiful Road King combo.

“We found the Road King after we got Stuart’s Indian up and running” he began. “We were on the lookout for a second bike for the business and found this 2010 Road King Classic with very low k’s on it. The sidecar was already fitted and its originally owner had turned eighty years old and was no longer able to drive it

This sidecar is an Australian made SRK but it needed a little bit of fixing-up when we got it. It was pulling really badly to the left – as sidecars do a little bit, but it turned out the sidecar’s wheel was dragging quite badly, so I cleaned it up and re-assembled and it now rides like a dream. “

I then asked about the dynamics of sidecar riding.

It was then I learned that the correct expression for getting a sidecar up on two wheels is called “Flying the Chair”.

“But you don’t counter steer or use body English” he continued. “Like a Trike?” I asked. “Maybe an unbalanced one! But it’s different, it’s pretty stable, and it’s really good fun. Braking is not too bad. It does pull to the right under brakes because the sidecar wants to ‘keep going’, when the bike slows down.”

Stuart then chimed in, “It’s a characteristic of all sidecars. It’s the same when you accelerate. The sidecar wants to stay still and the motorcycle wants to go forward – so it pulls. It’s something that when you first start riding you have to consciously compensate for, but after a while it becomes second nature as you are driving it.” That’s another thing I learned - the correct terminology. You ‘drive’ a sidecar.

“The big difference is that the Indian’s sidecar is fitted with a dynamic disc brake on the third wheel that is connected to the foot pedal, while the Road King only has a hand or parking brake. The dynamic brake helps with the ‘push to the right’ issue when braking.

I’ve also found that it makes left hand turns easier. It’s all part of the fun and eventually you learn the techniques. For example when making a left hand turn you accelerate a little bit at the apex and it gets the bike around the sidecar. You can also apply the rear brake but keep the power on and that tends to draw the sidecar back and makes the turn easier. Of course if you accelerate too early you’ll fly the chair. On a right hand turn it’s just the opposite, you decelerate at the apex, which brings the sidecar around and also improves the cornering.

Straight-line dynamics and stability are pretty good and not a lot of input is required, although I have learned that waving to my fellow motorcyclists is not an option as it needs both hands on the bars at all times.”

Mick took over: “Then of course travelling in the sidecars is completely different again. It’s really good fun, like being in an open wheel sports car, you are really low to the ground and it’s got almost a ‘Mario Cart’ feel to it. But it’s very comfortable as well. My kids fall asleep in it! But why don’t we go and find out.”

So we headed out along Flagstone Creek road for a photo shoot and my turn at riding in the sidecars. Mick was right. It is a lot of fun and even for the ‘larger gentleman’ like me, both chairs were surprisingly comfortable and nowhere near as scary as I imagined they would be.

Then Mick said the magic words, “Would you like to ride Dave?” and I had my first gp at the controls of a ‘Combo’. I found that it was like riding one of the number of Trikes I’ve tested for Heavy Duty, and not like riding a Trike - all at the same time.

You have to put riding a two-wheeler and body English and the leaning habit out of your mind and get into the ‘sit there and just pull on the handlebars’ mindset – just like on a trike. But then a trike doesn’t need to be compensated for a need to spin around on itself under throttle or brakes.

But from a short ride I could see that also like a trike, it wouldn’t take to long to get the mojo of punting one along quite efficiently.

A point that was emphasised when we headed back towards Gatton over some nice open roads and the Combos both sat at the 100kph speed limit with ease. And they looked might cool while doing it.

If you’d like to try the experience of a ride in a sidecar for yourself or treat someone to a really good bit of fun, check out www.toppadventures.com.au or find them on Facebook - and mention you saw the article in Heavy Duty.