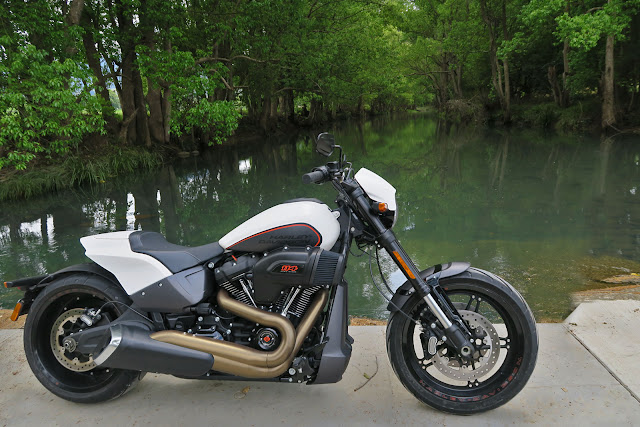 The rain held off long enough to get in a long ride in on the FXDR today.

I’ve been able to get plenty of miles in the saddle in between (and during) the last two week’s worth of pretty solid rain here in Brisbane, but today it dried out enough to really give it long run.

I left home about 7:30, fuelled up, and made my way south on the M1 to hook up with ‘Spook’ and his very well sorted Breakout at Reedy Creek.

On the Freeway I find the FXDR is a delight. Its clip-on style handlebars have a good range of adjustment available as they can rotate of the fork leg. I’ve got them pushed right forward on the Press bike and it gives me a really good ‘lean into the wind’ riding position and the whole setup I find very comfortable. 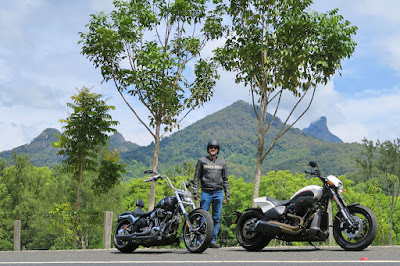 Plus, the bike feels so well planted on the road - absolutely rock-solid. The cartridge forks, redesigned rear end and Softail geometry work really well together. It all makes for very relaxed Freeway cruising.
The only thing I find is a little surprising is the lack of Cruise Control.

By 8:45 we were heading towards Tomewin Mountain road – only to find it was closed due to a bicycle race. Fortunately Spook knew a side way up the Mountain and we re-joined near the summit and punted the bikes through the reasonably twisty descent into Murwillumbah.

Again the FXDR was superb. It’s the best handling Softail I’ve ridden. It also has the best cornering clearance.

Down hill, hard on the (very good) picks, into a tight left or right hander is a thing of balanced beauty. The ergos make getting a (Forest Gump voice) ‘Butt-Tock’ off the seat really easy and putting some body English into its cornering is VERY rewarding. It took a serious lean to get anything more than the heel of my boots to touch down. How Harley has managed to get a 240 section rear end to behave as well as it does is equally remarkable.

From Murwillumbah we headed over the Burringbar range and ‘Spook’s Playground’. It’s a smooth main highway with a series of 40 to 80kph long sweeping bends, dual laned for the most part.

The FXDR’s aforementioned rock-solid stability and planted feeling made this seriously good fun. So much so that we stopped for a leak at Mooball and headed straight back over the range and hit it again. 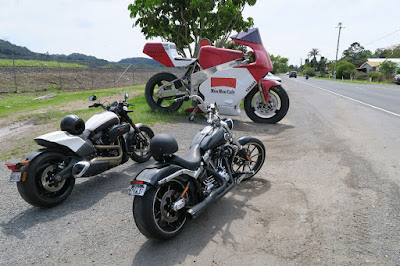 From there we took the turnoff to Stokers Siding and made our way along some twisty country back roads in what had turned into near-perfect conditions. It’s a naturally beautiful part of the world, particularly after two weeks of heavy spring rains followed by a few days of bright sunshine – the valleys are so lush they almost glow with emerald green.

The FXDR nailed it on this road as well. The sporty nature of the beast means that it’s a firm ride and you feel all the undulations in the road surface, but for sports riding the feedback is spot on. This is most definitely NOT a ‘soft’ bike.

From Stokers Siding we continued ‘bush’ to Uki and Tyalgum before stopping for a break at Chillingham.

We had a good chin wag and a very nice pie as a procession of bikes were making their way in both directions, most checking out the FXDR as they passed. Personally I like its looks but whatever the opinion - it’s a real attention grabber.

From Chillingham we made our way up the Numinbah valley and the ascent to the border. The spectacle of the valley’s spring colour was uplifting, and not even the stops for the road works on the Queensland side could put a dampener on our mood. (Read: two idiots sitting on their bikes dancing to the MP3s playing in their helmets while they waited at the red light.) 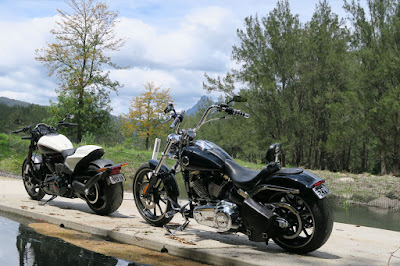 At the head of the Valley the road starts to run alongside the Hinze dam through to Advancetown - and this is another slice of road that the FXDR carved up.

In parts there are series’ of double apex, sweeping, 40 and 60kph corners that the bike absolutely devoured. No worries about dragging hard parts or having the occasional rough surface throw the bike off line. Simply hunker down, move some weigh and screw on that 114cube torque hammer as you hit the exits. It was seriously, seriously good.

Spook turned off at Nerang and headed home and I made my way back up the M1 to east Brisbane base. I got home a bit after 1pm.

The fuel warning light came on at 260km and was showing 114km range to empty when it did. I didn’t stop to refuel on the way but I will tomorrow and post the mileage it returned in the comments. Overall the ride was about 340km and it’s still showing 40km left. 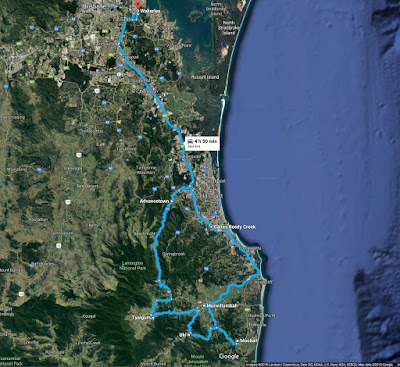 I did stop for a quick leg stretch before I got on to the M1 at Nerang, but made it all the way home without any saddle-soreness and still in good comfort – and good spirits. Even though a date with the lawn mower waited.

Some of the comments I’ve read about this bike have said that ‘Harley has lost its way’. After a big day today, riding the bike in Freeway, back-country, mountain roads and highways - I think they have found it. This is a very good motorcycle.