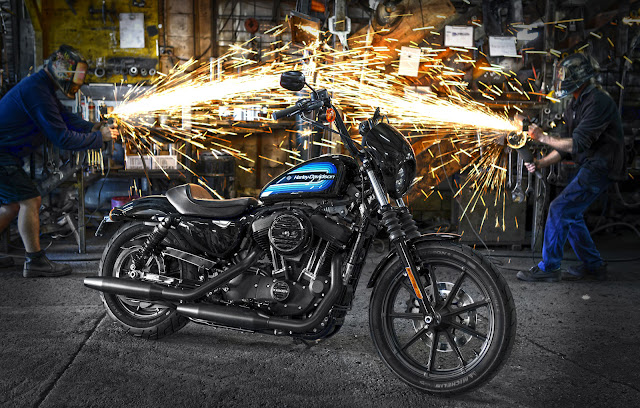 Oscar Wilde once quipped, “I can resist anything but temptation” and that’s the essence of what I enjoyed most about the 2018 Iron 1200 Sportster.

I guess like most of us, the temptation to pin the throttle on a nice motorcycle, to bask in the thrill and rush that comes with rapid acceleration, is a big attraction of the way we ride.

The problem with a lot of high performance bikes theses days is failing to resist that temptation means you are in the licence disqualification zone within a matter of seconds. Thrilling though that may be, having to look at your bike sitting in the garage while you wait to get the paperwork back isn’t so much fun.

Well, that’s the beauty of the Sportster 1200. You can pin it, hard, often and not jump immediately to light speed. With 97Nm on tap it’s not a slug by any means – but it’s seriously good fun, leaning on the throttle, on just about every launch and corner exit. The way the 88.9 x 96.8 bore and stroke Evolution engine with 10:1 compression revs and taps out is just so sweetly … pin-able.

Weighing in at 256kg in running order it’s potent enough that you still don’t get the chance to fully wind it out around town (with legal riding anyway), but it’s such a sweet engine and one that is so very rewarding to spool up. It had me sporting the kind of grin that reminded me of my Buell XB every time I did give it the gas. The staggered, shorty exhausts gave it quite a pleasant note when doing so too. A set of stage ones would be glorious.

The clutch is light and it’s been a long time since I dealt with a cantankerous gearbox on any Harley. This one is true to form and shifted surely and reliably. It didn’t miss a single shift in three weeks of testing. The belt final drive sends it all to the rear wheel with a direct and slop-free feel befitting the Sporty’s nature.

Apart from that sweet power plant there are plenty of other aspects of the bike I really enjoyed too. 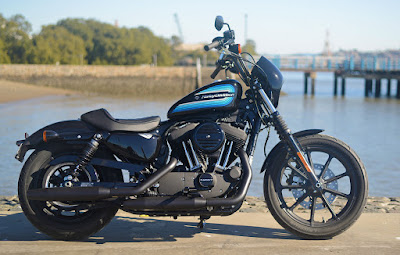 It stops and tips in well.

Harley has been making Sportsters continually since the first Ironheads were introduced in 1957. It’s fair to say they have the frames and geometry of the platform well sorted. The bike’s road manners are good. The relatively short 1,515mm wheelbase, 30 degree rake, 117mm trail combined with its low centre of mass make for a package that is both nimble when tipping it in and quite stable when cornering – even over irregular surfaces. No wallowing, no bucking – just steady manners.

It has 27 and 28 degree lean angles that are helped by the mid-mounted foot controls and the way they allow the rider get some weight off-board when really hooking in.

The conventional 39mm forks have 92mm of travel and the rear coil-over shocks are pre-load adjustable with 41mm of travel available. It’s a firm ride that also fits well with the sporty nature of the beast. The only real limitations to how far it tips are the slammed, low-down nature of the package and those lean angles. It’s not hard to get either peg on the deck carving up your favourite roundabout.

The dual piston callipers with ABS both front and rear pull the bike up well. They aren’t the killer stoppers like those on a new Softail, but they are good brakes with good feel and bite nonetheless. The front has a 300mm floating disc and the rear is a 260mm. I gave it a few controlled hard stops and the ABS was very comfortable.

It’s running the fat Michelin Scorcher “31” tyres front and rear. The front is a 100/90 and the rear is a 150/80 and they too are well suited to the bike’s style. I rode in some heavy showers and the grip was good and predictable. 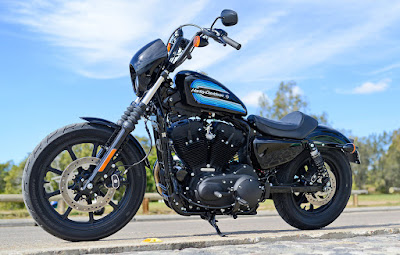 Yep, comfortable. I found the Iron to be surprising comfortable for a big guy like me. The Mini apes were the key, but the saddle is soft and gel-like and sits at 735mm high, which is a good compromise for us longer of leg that should work for shorter inseams as well.

The LED headlight is nestled in the ‘Speed Screen’ and the beam is wide and flat. The Screen is part of what a lot of people commented and complimented about the bike’s great presentation.

“That’s a great looking Sportster/Harley” I heard from total strangers a number of times during the test. The old school AMF livery went down very well with the bike’s target market too. (Though some of us who are old enough to have lived through those AMF days might smile wryly.) Overall the styling of the machine was a hit – from the apes to the solo seat, funky nine-spoke cast aluminium wheels, Screen to the traditional peanut tank – people loved it.

The Iron’s tank holds 12.5 litres (as opposed to the 48’s which holds 7.9l). I was getting around 165km before the warning light came on and then topping it up around 10 litres – so a 200km range would seem viable. But that’s also taking into consideration that I was quite hard on the throttle a lot of the time – remember that ‘all so pin-able bit’? Better economy would be do-able with a bit more … errr ... restraint. 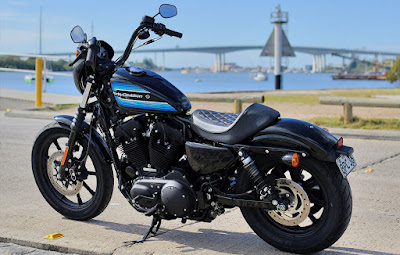 But then restraint isn’t the reason you’d buy this motorcycle. It’s one that beckons to be ridden hard – a Sportster indeed.

It has some of its bigger Softail brother’s retro-tech, but not all.  The advanced trip computer is missing, but the LCD mounted in the analogue speedo displays the usual tacho and odometer arrays.

But that’s also in keeping with the bare-bones-basics and part of the attraction and what makes the Iron one of the last ‘old school’ Harleys. The engine still vibrates, has big torque, taps out sweetly and it’s sitting in a great looking, retro-styled temptation machine.