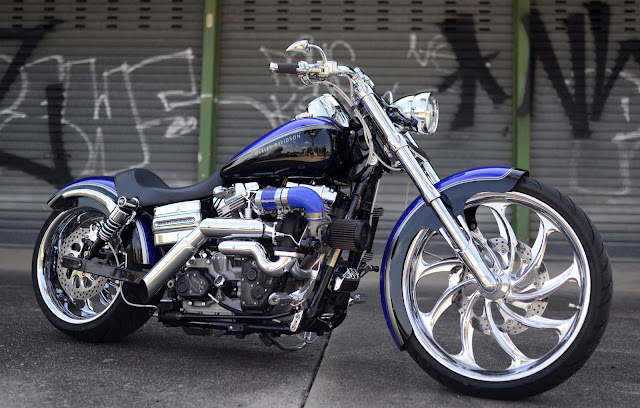 “I inherited the bike from my father. It was a project that he started before he passed away. He had done a little bit of work to it: paint and some accessorising, and it had the 103 cube motor with some cams to start with, along with the paint job by Zealous Airbrushing, but I knew he had a ‘bucket list’ of things he wanted to do to it, but never had the chance, so I took over the build,” he Began 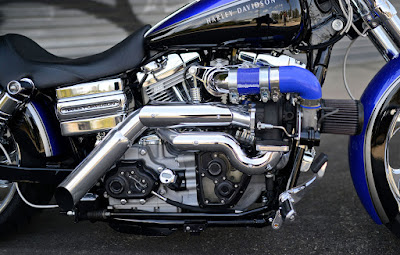 “Over the last two and a half years I’ve been chipping away, ticking the bits off the list and have added some of my own little touches too. I’m pretty sure he’d be happy with the way it’s all turned out.”

Brendon fitted a Wide Arse rear end kit, as well as the 23” front Wheel Conversion with an inverted front end and wrap around guards.

“Then we put on some PM slimline controls and Drag Bars and turned our attention to the motor. I looked at some big bore stroker motors, a pro charger and a few other options, but then I talked to Shane and Simon at HDM and they were developing a Turbo kit and we decided to go that way.”

Simon Yates from HDM then took up the build story. “We took the engine and put in an S&S crankshaft with Timkin bearing conversion. Then we bored the cases to give us a 117 cubic inch displacement and fitted S&S heads and S&S cams specially selected to suit Turbocharging. Then we fitted a custom-made Mambo Turbo charger and powder coated it all.

“We’ve added quite a few other custom touches that make the bike really flow and have turned into a one of a kind. We ended up with a real ‘pocket rocket’ that’s running out 160 horsepower.” 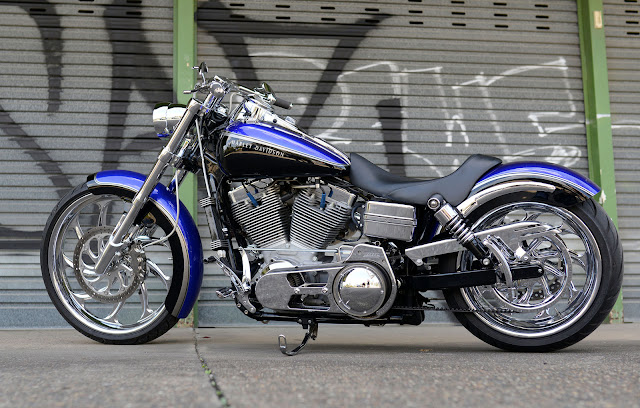 Meanwhile Brendon maintains that the project isn’t finished yet.

“ There’s a little more to go. We’re going to put in a different crankshaft later this year, just to beef it up a little more, and then we can wind the boost up. It’s only running pretty low boost at the moment – eight to ten pounds, and that’s giving us 160hp and 175 ft lbs of torque, it would be nice to wind it on a little more – just because we can.”

‘It doesn’t really need more horsepower” I offered a little sheepishly as I had just taken the bike for a quick spin up and over the Ipswich Freeway with Brendon’s blessing. And blessed it was.

I expected the quite awesome ‘hurry up’ that comes with a Super Glide running those sorts of numbers, but what really surprised me about riding the bike was how well mannered it was, even with all that grunt on tap. 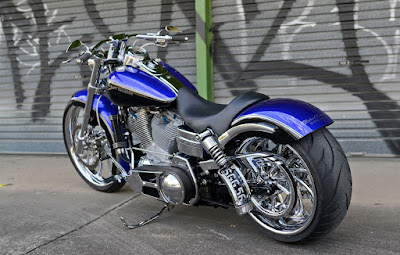 Out on the freeway the gobfuls of turbo-torque were a constant temptation to wring it on just a little more. The power comes on quickly, yet smoothly and I didn’t notice any lag – either with it spooled up or when winding it on in top gear – it just happened directly and … fast.

On the return journey I ended up in a typical west Brisbane traffic snarl and the bike was as smooth in 60kph stop-start as it was giving it a (short) handful on the on-ramp.

Back at base Brendan continued, “The plan is to also add a bigger oil pump and billet cam plate when the motor is stripped down for the new crank. We’ll also fit an external waste gate and screamer pipe.”

“You have to be ready for the power. It really pushes you back in the seat but it’s still totally ride-able and reliable – I wanted something that also had plenty of poke, so we spent the money and have come up with a result.”

He certainly has – it’s a fabulous looking custom motorcycle – from front to back and it has the performance ‘boost’ to match.

We’re sure his dad would be proud.