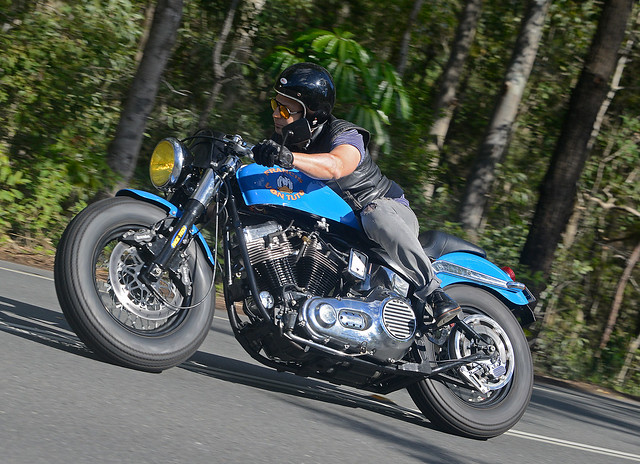 You wouldn’t think so to look at it, but Francesco’s custom Evo café racer started life as a 1993 Heritage Softail.

“I love all kinds of bikes. It doesn’t matter what kind of bike it is, I like to ride it into the ground.” He began in an accent that now mixes his native Italian with years spent in Australian motorcycle workshops.

“It was the first bike I bought when I arrived in Brisbane 4 years ago.  It was big and slow and it didn’t brake or turn - so of course it was love at first sight and I had to have it.

After months of riding it like a sports bike I ‘parked it’ under a guard rail and did significant damage: bent forks, smashed tank etcetera, and that’s where the journey started.

I always loved classic bikes and café racers too, so this was a great chance to rebuild the Heritage in a style I love and also to make it more rideable.

My goals were to increase the lean angle, add more braking power and give it a more sports-oriented riding position and posture.

I tried a number of different solutions but a modifying a Softail chassis is not easy – especially when a café racer is the target. But this was MY bike so I had to stick with it. 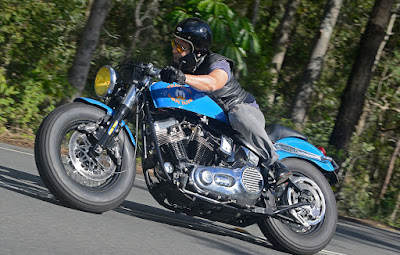 So I started by roughing up some rear sets using the pillion peg mounts, and then used a number of genuine H-D and a mix of other random bike parts.

The bike was completely stripped and the frame powder coated, as were the wheel rims, swingarm, lower clamps and lower fork legs.
The chassis, wheels and suspension are otherwise standard. This is because I wanted to retain the option of returning the bike to stock form - and to minimise any difficulty in getting the bike passed as roadworthy.

The front end was upgraded with a 330mm ALTH custom floating disc that is running dual Brembo callipers off a BMW R800. With the help of my friend Craig from CSF welding the custom aluminium brackets helped give the bike brutal stopping power.  The master cylinder is off a Kawasaki Vulcan 1500.

Rather than have two straight braided lines I really wanted to make a bridge between the two callipers and an elegant solution was provided John Stamnas.

For Evos the choices are somewhat limited but the next step in the front-end build will be to add progressive springs and gold valve emulators or cartridge forks.

The whole front-end look is set off by the original headlight that has now been mounted below the triple clamp - and it gives the bike a much lower to the ground look.

The rear disc is incorporated into the GMA pulley, which looks cool as and gives much better stopping power than I originally expected.  One issue with the pulley is the standard belt covers don’t fit so one had to be custom made.
But all this means that the objective of giving bike better stopping power has been achieved and it all serves as a memorial to the original single piston front calliper. 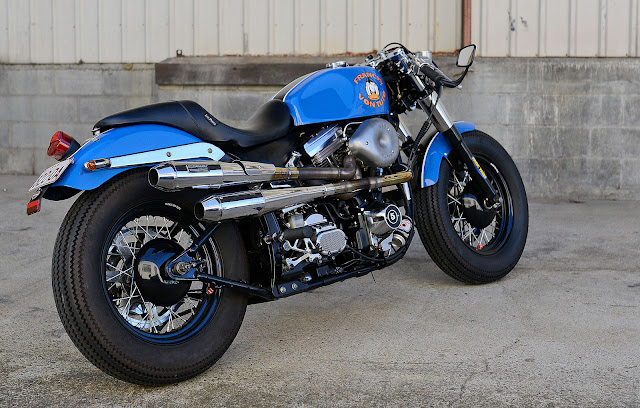 Having both brakes on the same side also meant I had to hide the rear disc carrier. I had the idea to fit a similar hub cover to match one on the front wheel. I designed a mount to fit and Steve from suspension improvements machined a solid round 120mm alloy bar to which I fitted the powder coated cover.

The engine was completely stripped and freshened up with new main bearings, new rings and big and small end conrod bushes, fitted by good old Ollie Logan and Sons.

The cylinder heads have been shaved and I did some minor porting work on Ollie’s suggestion. Adjustable pushrods and Andrews E27 Camshafts were fitted Then I bead blasted the engine and it was painted by Richard Simpson with a gloss two-pac enamel to enhance the post-war café presentation.

Carburation is by way of a S&S Super B, rebuilt with genuine S&S kit and tuned to suit the other modifications. It’s a bike that doesn’t like to go slow for too long – she likes long and fast roads.

Standard ignition maybe upgraded to a Dyna unit in the future.

The fantastic sounding exhaust system incorporates custom headers I made from parts from a Buell, a Sportster and whatever was left of the originals after the ‘incident’ with the guard rail. The genuine Kerker mufflers were a massive Ebay score off an unknown Harley.

The inner primary cover, gearbox cases were powder coated by Roberto’s Custom Powder and the gearbox was fully rebuilt with new bearings and bushes.

The front guard is off a Victory hammer, the rear guard is an original ‘94 Softail that came of a wreck and has been modified to suit the style I wanted.

The tank was reshaped by Matt Marxsen and was originally off a CB 400 Honda Supersport. The paint was done by Richard Simpson and is a two-pack gloss in ‘Ford’ Blue.

Why Donald Duck you ask? It’s not Plucka Duck, that’s for sure, it’s Donald because he’s very similar to me – he gets pissed off easily but is still very big hearted. The blue really matches his face and hat and I wanted him to be angry.

Francis Von Tuto, comes from my passion for the Kustom Kulture and of course Von Franco and Von Dutch. 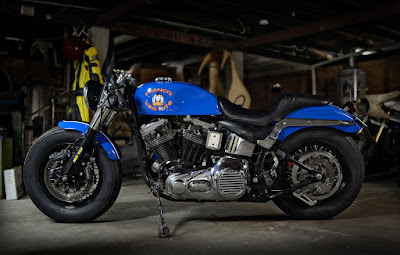 The seat is a LePera off a Dyna and it need a custom bracket to fit, but it offers good comfort and is a very well made seat – I recommend LePera. It really helps with that Café lines from tank to rear guard.

Originally the plan was for Triumph Thruxton handlebars bars but the ergos didn’t work as well as the generic Café Race Clip-ons that I ended up with.

Handgrips are Builtwell, and the switches are super-rare alloy machined Accell brand that I found on Gumtree. They came hollow and I had to buy a shovelhead internals including wires and buttons to fit them.

I used the original ignition switch and I moved it to the triple clamp but all I wanted was to make it simple so all it has in the way of warning lights is Neutral and oil pressure. The Speedo is generic off the web.

Now that the bike is rideable it’s very satisfying to see everyone accelerate to see my bike and though it’s ‘pretty much complete, having more saddle time lets me see what it needs next. The side covers, dashboard and a few other components need finishing.

Can I add that I’d like to thank my partner Pamela, Tony Hughes and all my good friends for all the support during the built of my very first custom bike.”

It’s been a long process. December 1st 2013 is the date Francesco smashed the Heritage and that’s also the day he decided to add some Italian flavour.