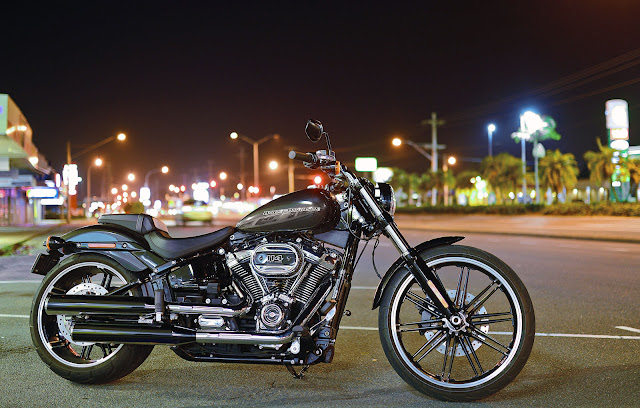 After topping the sales charts as the biggest selling motorcycle of 2016 the hugely poplar Softail Breakout fell away slightly to finish in third in 2017.

Last year the Postie Bike topped the charts, while Harley’s LAMS special, the Street 500 took second and the 103 Cube Breakout was third.

That’s still an achievement for the Breakout considering that the FXSB cost around $20,000 more than the bikes in the positions around it.

The question is whether the significant improvements Harley have made to the 2018 model will arrest that 24% decrease in sales?

After spending several weeks and a lot of kilometres aboard the latest 114 cube incarnation I reckon that if merit alone was the criteria it should clearly romp past the post because the M8 equipped, 2018 unit is a completely different animal. 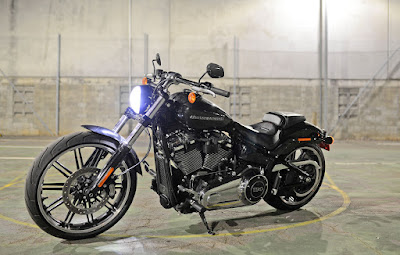 First and most importantly Harley have ‘fixed’ the Breakout’s handling.

The older incarnations were, let’s say “inconsistent” in the way they cornered – mainly due to the offset front end that required differing amounts of energy to turn either left or right. That was OK when you got the mojo of it, but at first it lead to several ‘WTF’ moments.

Of course it was fixable with some front-end re-alignment and a few spacer adjustments, but all that is just a memory now.

The 2018 model is actually a sweet handling, reliable cornering machine. Very far removed from any inconsistencies.

In fact I thought it was the sweetest handling of any of the 240 section rear ends I’ve tested. No doubt helped by the USD forks in the new and much improved Softail Chassis.

It still has Softail lean angles and the heels of my boots took a serious grinding as they sat on the forward controls but I really enjoyed throwing this bike around.

Not something I would have said for any of the previous models.

The front end is very tidy although there isn’t a huge amount of suspension travel and with that wide rear it is quite a firm ride and you do feel the bumps, but it didn’t bottom out at all during the test and the way it handles makes up for the sportiness of the suspenders.
Also contributing to the riding enjoyment are very comfortable ergos. The flat drag bars on slightly pulled back risers, very comfortable gel seat and forward pegs all made for a riding position that I found to be ‘all-day’ good.

I did several 350km plus day rides from Brisbane down to the NSW North Coast and was still good to go further by the time I got back to base. For a cruiser style bike it toured remarkable well too. 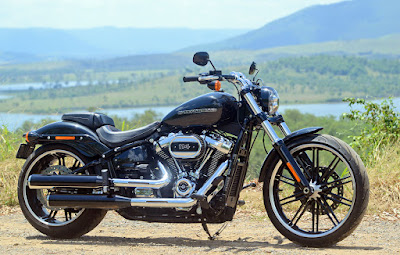 What’s that? “Touring? Not with that tiny fuel tank Dave!” I hear you say.

Well, its range is actually OK. On those day rides with a mix of city, country and freeway I was getting 240km before the fuel warning light came on. The range on the trip computer still showed 80km at that point – so around 300km to the tankful should be viable. And yes, that’s not brilliant for a tourer, but it’s perfectly acceptable for what is a capable muscle cruiser that does a bit of everything.

A Muscle Cruiser it most certainly is. The 114 power plant is strong, ‘torquey’ and the 240 section rear is the ideal way to get it all to the ground. The cars disappear in the rear view mirrors at a very satisfying rate when launching it from the traffic lights. It’s got some serious grunt.

This one also shook a lot more than the previous 114 and 107 Milwaukee 8 engines I’ve ridden. It developed more vibes across the rev range. That may be because the test bike showed signs of copping a bit of a thrashing before we got our mitts on it. The brakes were glazed and the pipes had been dragged on the deck pretty hard, but it also helped me develop a theory about what engine I’d choose: 114 or 107 cube.

If I was looking to keep the bike reasonably standard – Stage one or Stage two builds – I’d go for the 107 cube. There isn’t a whole lot of difference in the way the two motors ride or feel in stock form. The 107s seem slightly sweeter, taps out a bit better and doesn’t vibrate as much as the 114 (In stock form).

If I was going to really chase performance and go to Stage Three or Stage Four – then the 114cube is the way to go. It’s already got the big barrels so you don’t have to buy them again.

Either way, it’s a great motor in the new chassis. 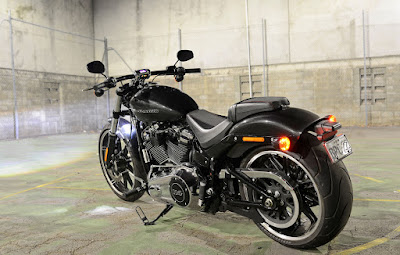 The four piston callipers and fixed rotor front brakes and two piston floating rear pulled the 305kg (in running order) Breakout up on a dime. I couldn’t fault them. Out back of Murwillumbah the speed limit signs say, “Drive to the Conditions”. They were perfect. We did.

Through some of those glorious twisty valley roads the brakes got a serious workout and showed no sign of fading or overheating. The bike just nailed it.

Actually, the bike nailed most of what I threw at it. It proved very comfortable in both City and Country environments. It’s narrow enough to lane split with ease and has plenty of show bike cruiser appeal. It goes and handles well enough to be very enjoyable in more sporty open road conditions and it’s comfortable enough to sit for a few hours on the freeway without killing your arse.

There are plenty of other things to like about the Breakout too. I thought the LCD instrument display set into the handlebars was really cool and the rest of the creature comforts are what you would expect from a $34,000 bike.

The Gasser II cast Aluminium wheels look great and the overall line of the bike is very attractive. It’s got some great angles. The test bike is finished in ‘Black Tempest’ and that worked better with the black heat shields on the mufflers than some of the other colours do.

I’d add one of the aftermarket tail tidy kits if it was mine and maybe it’s been because of all the ‘controversy’ about the headlight on the Fat Boy that there hasn’t been much social media discussion of the Breakout’s light, but it’s the one style point I didn’t like that much.

It works really well, with a brilliant, wide flat beam, and looks great front-on, but the surrounds and finish are, well … plastic.

But that’s just a tiny gripe on a bike that I thought has been well and truly sorted and due for another podium finish in the important motorcycle Sales race.