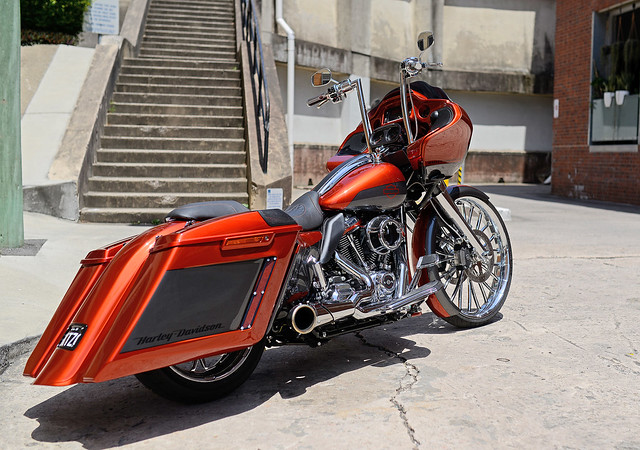 It was a typical weekday afternoon and I was loitering around the Morgan & Wacker showroom, drinking free coffee and drooling over the latest releases (as you do) when their parts and accessories guru, Lee Negus, rocked up and said, “Ah, Dave, I’ve been hoping to catch up, we’ve got a Bagger build in the workshop that I think Heavy Duty would be interested in.”
“Do tell?” I quizzed.
“Better still, why don’t we set up a time and you can take it for a ride.”
“Deal.”

The following Thursday I was out in the back alley of M&W being introduced to a quite spectacular 2018 CVO Road Glide that was exactly as Lee had promised - entirely interesting.
Before I took it for a spin we went back inside, sat down in the showroom and he gave me the full rundown.

“The bike was already fitted with a Stage 1 kit when it came to us,” he began. “But the owner, James, wanted to go ‘completely next level’ so we started planning the build together. He had quite a few images from Social Media that he showed us as a guide for what he wanted to achieve and we set about sourcing the inventory to make it happen.

The brief was basically that he wanted that super-stretched look – but the bike still had to be ride-able and viable. So we wound it back a little from some of the Facebook pictures and came up with a great looking build, that as you will soon find out, is very ride-able.”

“The bike also had Legend Air Ride suspension fitted previously, but it took us about a week to track down the right kit to meet the goals and find the right compromise between the stretched look and the way the bike rides.” Lee continued.

“KPR Industries helped us find a complete Trask Performance ‘Speedglide rear kit’ and it was exactly what we wanted - with the two into one pipe option. They supplied the stretched bags, side covers, rear fender and also the Trask Performance Chin Fairing. The bags didn’t have any cut outs so it’s a ‘full delete’ on the rear and it looks great with excellent attention to detail.”

The front wheel is also a major component in this build’s style and look. Lee explained, “We went with a RCC Eclipse Front 26 x 3.75 wheel, wrapped it in a Metzeler ME888 and fitted it under a great looking RCC Wrapped Front Fender. We were also able to source a Thunderbike 45degree bolt-on rake kit. It’s a beautiful piece of high quality billet that simply bolts on and sorts the front end beautifully.

The next thing was we installed a powered MRI Centre stand to work in conjunction with the Air suspension. Both these were wired to work off the OEM switched on the dash so that you can drop the stand and lower the bike onto it with the adjustable suspension.

Then we fitted a genuine Harley Chiselled Ape Handlebar kit and a Mustang 2-up Perewitz Seat, which we had stitched in custom orange to match the paint.

From there we added a Performance Machine Paramount rear wheel and the Freedom Turnout 2-1 Exhaust to compliment the Arlen Ness Method Clear Breather.

Next was the paint. That was done by Advanced Motorcycle Painting and Decals. We wanted to enhance what CVO had done with the original colour theme. We used the original colours and the original line of the pin striping, but changed it up a little bit. James went to Advanced with a very specific look in mind and they made it a reality. We particularly liked the way the line of the pin stripe flows down the fairing, onto the tank, side covers and bags – and the way it flows to the front fender makes in a lot more intricate than stock.

We also did some pretty trick finishing on the taillights. We didn’t want to cut into anything so we elbow-bracketed a led strip into the crease between the bag and the fender – so they are almost invisible – until you turn them on. We also custom made a radius plate frame – we cut it right down so it fitted exactly into the US size plate gap so we didn’t have to fill anything.

The whole build was expertly put together by Josh Brailey who worked with James to get exactly the result he was after – and needless to say he’s a very happy customer. But what don’t you take it for a ride and see for yourself Dave?” Lee concluded.

After a brief tutorial on the center and suspension operations I cruised down town.

The first thing I noticed was the way everyone looks at this bike. Construction workers give it the big thumbs up; truckers wind down their window and pay it a compliment and random passers-by wave. I’ve never ridden a bike that had so many people so animated as it went by.

After some photo stops down by the river I headed out to the M1 and a few on-ramps and freeway-speed runs. Like several other big wheel bikes I’ve tested this one rode remarkably ‘normally’. It highlighted the importance of the triple trees, rake, trail and getting the geometry right. The front end has been lowered 2” to accommodate the big wheel and it all works. The only time I noticed any gyro effect was in side-to-sides at speed. Even then it wasn’t a bad thing, it wants to pick itself up and stand upright more than a standard size wheel in rapid direction changes, but it actually felt quite good. It didn’t seem to require any extra effort to tip in, only that it had a little bit of a self-righting action when it needed standing up again.

Lee mentioned while he was handing me the key fob that they had made some compromises with the owner about the length of the bags to keep it all rideable. That worked too. Around New Farm and a series of roundabouts and speed humps there was no sign of anything touching down or dragging hard parts - and overall it was a very comfortable and surprisingly pleasant bike to ride – one that belies its looks.

The pushed forward apes worked really well for a tall guy and the only time they felt a bit heavy was at walking speed and manoeuvring the bike into photo locations.

I really enjoyed what was an all to brief ride.

For a head-turning, wild looking, big-wheeled, stretched bagger that fits the brief of still being a rideable serviceable motorcycle this one is absolutely ‘job done’.