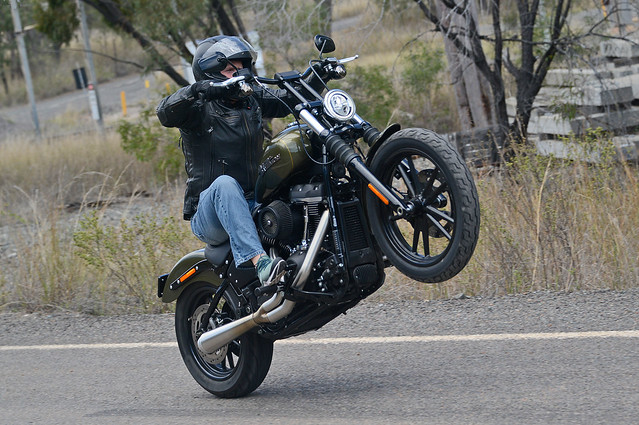 It was one of those assignments that make contributing to Heavy Duty such a joy.

“Dave, the team up at Harbour City Harley-Davidson in Gladstone have produced a few special Street Bobs that we’d like to cover in the mag,” Was Brum’s opening gambit.

A week later I was on a Qantas flight from Brisbane, charged with a brief to ride and report on some of their latest projects.

Owner and Dealer Principle Mark Harris met me at the airport and we talked about the dealership and their build philosophy en-route to their Hanson Road showrooms.

“The first thing we do is talk to our customer and find out what it is they are trying to achieve when customising their Harley. What their wants and needs are, because there isn’t one kit or combination that will suit everyone.” Mark began.

“Everything has to ‘hold hands’ in the combination. It’s no use using a camshaft that’s too big for the cylinder head or heads that are too big for the camshaft. We take the time to work everything out. Just because a component is the biggest or most expensive, it doesn’t necessarily mean it’s the best part to obtain the result our customer is after. We also have found that a key criteria is the air speed through the cylinder head.”

Go with the Flow

“It’s actually one of the biggest things we’ve found - is that if you want to make lots of power from a Milwaukee 8 engine, start with the cylinder heads. They also have to be designed around the end goal as well. There’s not one product that you can buy off the shelf that’s going to work on every bike or build.”

When we arrived at the dealership the conversation continued and Mark introduced me to the three feature bikes: two unique Street Bobs and a fabulous looking Sport Glide.

“We’ve done all of our R&D on these bikes in-house here and the Cylinder heads that we are using are by Warflow – a local Gladstone operation that produces outstanding results. These aren’t CNC mass-produced items, each one is individually flow bench tested and custom hand machined. To get these products you need to come and see us at Harbour City or Darling Downs H-D exclusively because they are not mainstream, but they are outstandingly good. They really are the key to achieving what we have been able to do with these three bikes.”

Mark then went into more detail, “There are three Head options. The first is the ‘Performer’. Properly set up these heads will make around mid-120 horsepower and 130ft.lbs of torque with a ‘small’ cam. These are designed for maximum ride-ability and bottom end torque. Next is the ‘High Performance - Extra Flow’. When properly set up these will produce around 140 plus horsepower. Again depending what the customer requires we can tune for maximum horsepower or big torque and ride-ability. These heads cost $1590 exchange.
Then we have the ‘Big Valve’ units that we are currently developing to use on out ‘Project 150 plus bike –as the name implies, it will exceed 150 horsepower. These heads include bigger valve springs, guides and upgrades. The exchange cost is $2490.”

Then Mark said the words I wanted to hear. “We’ve got some of those options installed, set up and running in the bikes out front – why don’t we take them for a ride?”

The first one I tried was the black 2018 Street Bob. And what a thing of beauty it is.

Mark describes it as, “Running a 120 cubic inch short stroke motor (“four inch one hundred and eighty five thou bore”), CP pistons, HPI Throttle body and a relatively small 475 thousands lift camshaft – so it doesn’t need heavy valve springs etc, it also has the middle of the three options of Warflow Heads – the Extra Flow. It has a Bassani two-into-one exhaust system and a Screamin’ Eagle high flow air cleaner. It’s finished off with a Saddleman seat and a set of genuine H-D Chisel Bars. ”

The brief for this bike was to be able to get on it and ride it anywhere you want. “Ride-ability and tractability” was the customer’s stated goal. It develops 138ft.lbs of torque and 129.5 horsepower and from the moment I opened up the throttle on the back road from the shop out to the Gladstone Marina I was seriously, seriously impressed.

The boys at Darling Downs H-D introduced me to the ‘five second challenge’ with the stage five Road King Special tested in Heavy Duty (#154). Basically it dares you to hold the throttle open for a full five seconds in any gear. I failed on that bike and on the roads around Gladstone I failed (easily) on this Street Bob too. There is no way you could do it and hope to keep a licence intact. It’s ‘that’ potent.

But that’s not to say that this bike wasn’t a delight to ride on the road. It still proved remarkably tractable and well mannered chugging along at the speed limit (well … near it anyway) and when I did open it up it pulled long, hard and strong with a linear delivery that went right through the rev range, while the surge of its huge torque was equally exhilarating when winding it on in higher gears. It’s comfortable, it’s good looking and it has some serious hurry-up.

After a photo stop at the Marina we headed out of town a ways where Mark did some ride-bys for the camera and the sounds coming out of the Bassani as it passed by were almost as sweet as the thrill of riding it.

After taking some pics we swapped bikes and I jumped onto the Olive Gold Street Bob. Oh. My. Goodness.
As Mark put it, “The Green Machine was built around the simple concept of ‘how much power can we make from the short-stroke engine?’ This project was something of a leaning curve so we gave it what we thought it needed and it works really well. As well as the Warflow heads, it’s running a four inch, one hundred and eighty thou Gibtech Piston which yields 11.5:1 compression and gives it a 120 cubic inch capacity. It has a big Woods Cam in it, a triple nine, plus it’s got our own designed and produced intake manifold fitted that marries the standard manifold with a Screamin’ Eagle unit that has been ported by Warflow, (and costs $550). It is fitted with a Screamin’ Eagle Air Cleaner. So far it has produced 142 horsepower and 136ft.lbs of torque and is the basis of our Project 150-plus build coming soon.”

This is one potent motorcycle. It’s brutally powerful yet still very rideable and manageable – even civilised, until you open it up. Snapping the throttle sees a surge of acceleration and the front wheel wants to lift in a manner I haven’t experienced since I owned my Buell – but this is a full-noise big block!

The way it’s set up with Bung King extra tall risers and flat bars enhance its stance as a wheelie monster. The sound from the Bassani system is as throaty and tasty and the black unit’s and the presentation has been enhanced with the wheels off a 2010 FXD, “That we made fit because there wasn’t really any existing mag wheel options”.

On the Drag strip is has run 10.73s at 125mph. This is a Harley that will give many a modern sports bike rider a real surprise. It all gets going very quick – very fast.

Then it was my turn on what was already my favourite stock Harley, the Sport Glide. I was already well enamoured with the stock platform’s handling, comfort and all-round versatility, but the HCH-D treatment on this maroon beauty has turned it into something truly outstanding.

“This one was built as a ‘Rider’s Motorcycle’. The goal was for it to make great power ‘everywhere’ – not peaky, just a broad spread of usable power and torque. It’s displacing 117 cubic inches which is as big as you can go on the stock cylinder – which makes it a more affordable package. This one is running CP Pistons, 10.8:1 compression with War Flow Performer cylinder heads. It also has a D&D exhaust system (which sounds superb) and notably has the biggest header pipes.” Mark told me.

It also has a very cool Power Vision screen mounted near the RH switchblock that gives comprehensive engine diagnostics on the fly. But the real attraction is that this is now a sweet handling, great looking, versatile, comfortable and high performance H-D with around 125 horsepower and 134ft.lbs on tap. What a great, great motorcycle.

So the obvious question after the test riding and blowing me away with the performance of these three bikes was done was: How much?

Mark’s answer was straightforward, “Both the Green and Black bikes cost about the same, they are just different takes on how the power is delivered.
The cost is $6,920, assuming Stage 1 is already done (Pipes, air and tuner.)
The Sport Glide package is $5,630 as it runs the Warflow Performer heads (not the Racer heads like on the other 2.)
But we offer a cost efficient 120hp, 130ft.lb engine we can deliver for $4,590.”

For more information on how to transform your Harley experience get in touch with Harbour City or Darling Down H-D and share the joy.