Not since H-D released the V-rod in 2001 has there been a new model that has polarised Harley owner’s opinions so widely.

It’s therefore quite fitting that the 2019 FXDR fills the gap left by the discontinued V-Rod in a number of ways.

As one reviewer succinctly said way back then: "The V-Rod was intended to bring in more than the usual suspects, and it did."

So too will the FXDR attract a range of different customers, regardless of how much its appearance and style has incensed some of the rusted-on old-school Cruiser owners.

This is a bike that covers some of the ground recently broken with the 2017 Fat Bob, but takes it to the next level. It’s a bike with enormous potential.

Quite simply, this is a wonderful motorcycle to ride. It’s powerful, smooth, responsive, handles well, has excellent cornering clearance, is surprisingly comfortable and I think it looks great. And that’s just in the standard trim of the ‘Bonneville Salt’ coloured Press bike. I had a glimpse of its potential too with time spent in the saddle of two other examples that were fitted with performance upgrades. 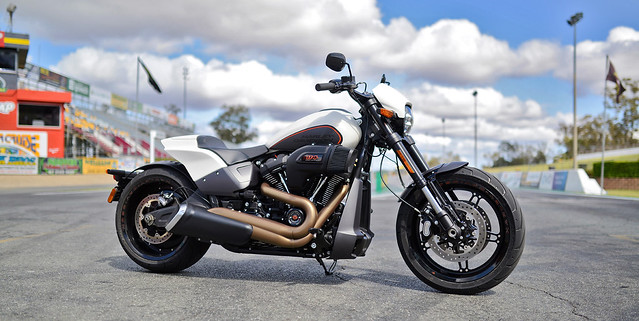 But first, the Press Bike.

I spend two weeks dodging the early October monsoonal rain squalls around Brisbane on it and rode it every chance I could. Every time I rode it I liked it even more than the time before. To say it grew on me is an understatement. By the end of the test I was in serious lust.

At its heart is the Milwaukee 8 power plant in 114cubic inch trim. It’s 102x114mm bore and stroke displacing 1,868cc is the smoothest running, most responsive, sweetest revving stock 114 cube I have ridden - significantly smoother than the 114 Breakout tested in Heavy Duty #159 and even smoother that the 114 Fat Boy tested issue #156 which was silky.

Some of that is no doubt down to the big ‘Drag Bike style’ air intake and redesigned exhaust. Giving the bike a handful from the lights or on the on-ramp sees the traffic getting very small in the rear view mirrors very quickly. The speculation is that the DR part of FXDR stands for ‘Drag Racer’. It’s not hard to see why. With 160Nm on tap it’s also a delight to roll it on in top gear and the torque surge is very satisfying.

That engine is slung in the best handling M8 I’ve ridden. Some of that is down to its improved dry weight – under 300kg – and some is due to the inverted cartridge front forks, upgraded rear shock and reliable Softail chassis. (It takes over the ‘Best’ plaudit from the Fat Bob via its better clearances.) The near-33 degree lean angles meant that I was scraping the edges of my size 12’s well before the anything else touched down.

I punted one example up the western side of Mt Glorious, through a succession of 20kph posted left and right handers at 50 to 60kph, and didn’t touch the pegs down once. It was very, very enjoyable. H-D claim that a feature of that big muffler is that it doesn’t interfere with cornering clearance. It doesn’t - in normal conditions anyway.

The big, twin disc, 4 piston front brakes with ABS are also very good. Tipping the bike in under hard braking, with the forks, chassis and stoppers all working in unison is simply superb.

Side to sides and tight apexes are remarkably easy for a bike with a 240 section rear tyre. The only time I really noticed the fat rear end is at very low speed and slow U-turns, where it can be a little uneven, but at normal speeds it feels remarkably well planted and solid on the road - outstandingly so – and the ride is firm as befits its sporty nature.

I found the bike to be comfortable and the seat is a lot more compliant than it looks. I did need a ‘seat break’ after around 2 hours non-stop in the saddle, but up until then the ergos were near perfect. The fact that it has a great range of adjustment available from the clip-on style handlebars helped. They rotate on the fork legs and when pushed well forward gave me a seating position that was perfect for the bike’s attacking nature – especially for a tall guy.

The Daymaker headlight is brilliant, the digital instruments and gauges set into the handlebar riser are surprisingly legible and easy to read - and the stretched fuel tank gave a range in excess of 300km. It all performed as a nicely rounded package. Although I was a little surprised by the lack of cruise control.

But then there is looking at it.

There were a number of days when it was just too wet to enjoy riding, but found myself wandering into the garage, cleaning and casting an eye over the FXDR. I enjoyed its modern and striking lines, matte finish paint and gorgeous wheels.

I had no trouble ‘getting past’ the rear fender assembly. Particularly after I saw some of the images on our Facebook Page with a Tail Tidy fitted. That rear guard and taillight assembly is probably the most ‘contentious’ appearance issue on the bike and removing it won’t make much difference to the wet weather ride either. Neither it nor the front guard are particularly effective at subduing wheel-spray. But then, that’s not what this bike is about anyway. It’s about sports and leisure riding and it does that quite brilliantly.

It’s also about potential. Have a look at the HD-A web site and check out the full noise Screamin’ Eagle options available for the FXDR and you get some idea of where the bike can go custom-wise. 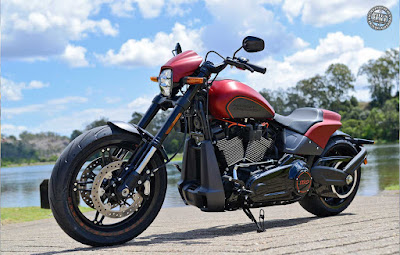 I was lucky enough to have some first hand experience with a few of the customisations options available. While the Press Bike was having its first service the crew at Morgan & Wacker threw me the fob for their ‘Wicked Red’ Dealer Demo unit. It has been fitted with a Bassani exhaust system and a tuner. I took it out west of Brisbane and into ‘them thar hills’ for the day and had an absolute blast.

The pipe and tuner combined with the stock air cleaner open the breathing up even more. The top end becomes stronger and the motor vibrated even less at higher revs - and the sound is great. If you are in Brisbane, see if you can score a test ride. It’s a beautiful thing.

Then when I was in Gladstone later in the week the crew at Harbour City H-D have fitted their Black Denim Demo unit with a genuine Screamin’ Eagle Slip-on muffler and  S&S Cam. Those additions made theirs tap out longer, stronger and smoother than the previous two. It’s a fantastic ride. Likewise, if you are in Gladstone see if you can wrangle a ride. It will not disappoint.

The FXDR represents a new direction for H-D: an air-cooled Muscle Cruiser with real get-up-and-go. In the marketing they say ‘it will move you like you’ve never been moved before’.

The FXDR is priced at $35,495 in Aus. It will appeal to buyers who wouldn’t have considered a Heritage styled bike, but may invest in a modern take on an excellent muscle bike.

One that will appeal to the ‘unusual suspects’.