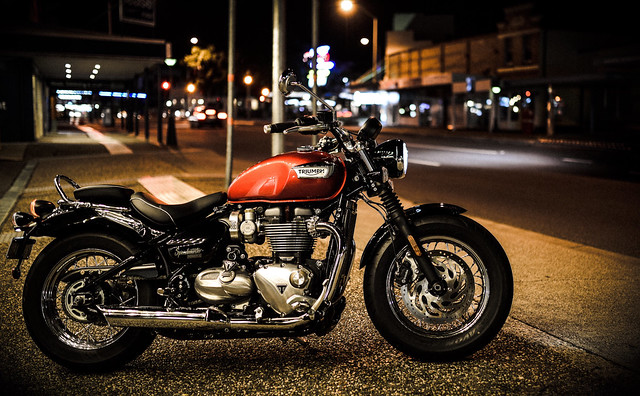 It was me.
I admit it.
For a long time early in the 2000’s I was that guy who wore a Triumph tee shirt to a Harley show. Naturally I also wore the barbs that came with it.
Springer Bob: “Hey Dave – what do you call a bloke on a Triumph with a bunch of Harleys?”
Dave: “Dunno Bob?”
Bob’s brother Al: “Unemployed!”
To gales of laughter from the other 5 Harley riders I hung out with most weekends.
I told them “that was OK - I’ll still wait for them to get to the pub”.
But that was a long time ago and the Hinckley Triumphs were emerging pretty well from the shadows of the Meriden Co-operative and a Lucas electrical past.

After all this time, when Brum emailed me to advise that a new Bonneville Speedmaster was available for Heavy Duty collection at Oliver’s in Brisbane, it didn’t take long to dig out a Triumph tee shirt again.

I was also very keen to try the new 1200 HT engine – ever since it was released. I had a long history with Speedmasters. We go right back to 2003 and the original Hinckley 790cc model I tested.

2018 is a whole different story however. Triumph have come up with a low-down, retro-styled package that is great fun to ride. With very spirited performance for its class… actually, compared to the ’03 it’s a missile - and it has a much bigger grin factor. 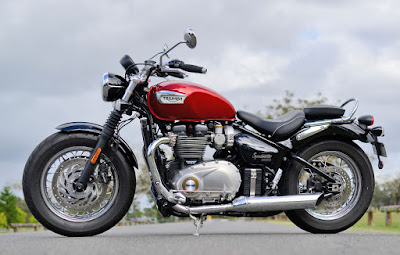 Its numbers are very similar, power and torque-wise, to the last bike I thought was this much fun around town, the Indian Scout 60 – but with better suspension.

The Speedy has that same knack of feeling long and low, with a ‘sat upon’ stance. I call it ‘skidder’ - and it dares you to give it some stick.

That turns out to be rewarding, too. The Liquid cooled 1200cc, 8 valve, SOHC, 270° crank angle parallel twin is smooth and strong. It produces 76hp at 6,100rpm and 106Nm of torque at 4,000. At idle it’s dead smooth. At riding speeds there is a gentle throb that feels a bit sweeter than the 360 degree cranks on other Bonnes. It helps feel just how pleasant and refined this engine really is.

The ride by wire setup allows for two riding modes: Road or Rain. The throttle response is, as you would expect, ‘by-wire-crisp’ and the fuel injection didn’t stumble once. Early Hinckley owners will appreciate the significance of that too. I didn’t particularly notice the ‘torque-assist’ clutch other than it felt light and easy to engage.

I also think that this is probably the best looking retro-styled, liquid-cooled engine to date. It’s free from the hoses and ducting that took-away from many earlier efforts. It still has a big radiator, but the plumbing is very well disguised. 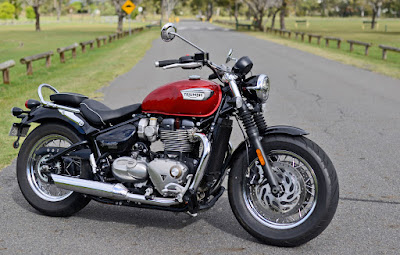 Triumph have persisted with making the fuel injection units in the shape of a carburettor – or ‘fauxburettors’ as we call them.

Overall the bike does have some nice angles though and with a ‘chromed stainless steel, 2 into 2, twin-skin exhaust system and chromed stainless silencers’ it sounded quite tasty too – especially for a stock system.

They were also keen to note that the Speedmaster is “designed for customisation with two inspiration kits and over 130 custom accessories. These include a ‘Highway’ kit which has a full soft luggage pannier set, a ‘Maverick’ kit for a stripped back, mean attitude which includes single seat and raked out bars, plus accessories for style, detailing, comfort, touring, and premium Vance & Hines exhausts.”

They are making a serious attempt to get a piece of the customised cruiser market.

I gave the Speedy a run up the mountain from Brisbane, down to the Gold Coast - and did plenty of inner city rides. Overall comfort was good and the pull back bars, forward controls and 705mm saddle height made for a relaxed riding position – even for a tall guy. It became more of a ‘standard’ riding position with my long legs and it felt quite light and chuck-able on the road. It weighs-in at 245.5kg dry and its manners are obviously helped by a reasonable low COM.

I really liked the new engine and the way it goes. The big 310mm twin disc front brakes with twin piston Brembo callipers are very likeable too. They were so good I hardly brought the 255mm single disc rear with Nissin into play at all. It has ABS both front and rear.

The Speedmaster shares it chassis with the Bobber model and has the same hard-tail looking ‘cage’ swinging arm. The shock sits just under the rider’s seat. For a monoshock rear I thought the KYB unit worked well and gave 73mm of travel. The front features 41mm KYB cartridge front forks with 90mm travel. They are good suspenders and it’s a typical mid-size cruiser’s sporty and firm ride. 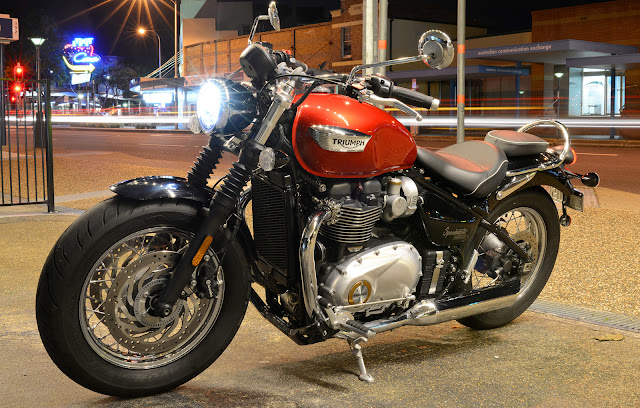 Combined with the 1510mm wheelbase, fat 130/90 B16 front and 150/80 R16 rear Avon Cobra tyres it make for a pretty sweet handling cruiser too. It runs out of its (reasonably good) cornering clearance well before it runs out of handling.

The twelve-litre fuel tank gave a range of around 200km before the warning light appeared on the well-presented single instrument cluster. The instruments feature the usual array of warning lights mounted into the analogue speedo, as well as a number of trip computer and various data functions set out in its inset LCD display.

The left hand switch block has an ‘i’ button to cycle through the various trip meters and countdown fuel range options. It also houses the ‘one button’ cruise control switch, while the right hand block has an additional toggle to change riding modes and traction control.

The bike has some very nice touches, the LED headlight with running light is good and the immobiliser is built into the key is clever: no key – no go.

It has great brakes, good suspension, a lovely motor and it has some really nice old school angles to look at. Priced at $21,500 ride away, the new Bonneville Speedmaster will fill a market niche for riders looking for something a bit different to the existing v-twin, mid-sized cruisers – something they can hop up a bit – and it does it well.

I might have to get some new Triumph tees though. 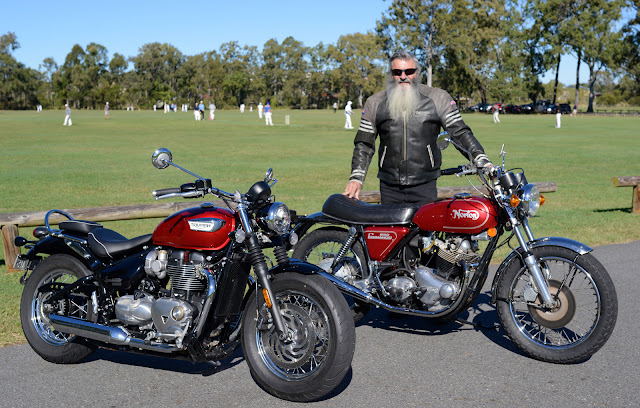 Brum said that he wanted some riding shots to go with the Speedmaster, so I got my pal Douglas to ride it past the camera a few times. I also asked if he would take his tidy 1973 Norton Commando along for the shoot. “Just so we could do some side-by-side ‘old Classic Brit Vs new Classic Brit’ comparisons”.
After a morning around the Bayside we both agreed that the Norton was the better looking of the two, although the Speedy was still a good looking package. Unlike the Norton it has to comply with a heap of pollution and noise regulations.
“You also don’t have to put up with a whole lot of crap”, Doug pointed out as he was turning the fuel taps off on the Norton so it didn’t flood while he was on the Triumph.
When we finished the shoot he noted that “Everything is so soft and compliant with the modern bike. There’s no effort. It all just works. Works so well and you don’t have to wrestle with it like the old girl.”
“That Speedmaster is a very nice bike” was his final take after riding the two.
We then ran a few side-by-side roll on tests and gave them both a handful on the local on-ramp.
Even with a significant weight handicap (me) on the Speedmaster it was easily seven or eight bike lengths faster to 100kph. Interestingly the Norton had better top gear roll on from 90kph – the benefit of being a lot lighter and with fewer gears.
When I got on the Norton the old girl started first kick every time, but after stalling it several times and trying to get used to brake and gear pedals being the other way I couldn’t wait to get back on the Speedmaster – Doug had both covered.