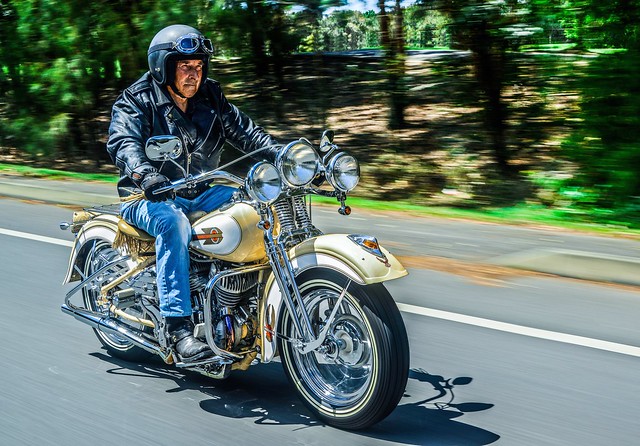 Jose’s immaculate WLA 42 was one of the standout bikes at the Gold Coast Bike show so I asked if we could feature it in Heavy Duty.

A few weeks later we met up and headed out for a cruise around the ‘Glitter Strip’ and a sit-down for a chat about the bike and its history.

This is one supreme head-tuning motorcycle and it drew a small crowd of appreciative onlookers everywhere we stopped. When we did get away from the crowd and talked it made for a very interesting yarn - told in a still-strong Spanish accent that’s been softened by 30 years of living in Australia.

“I’ve always been keen on motorcycles, ever since I was a boy, but when I finally grew out of 250’s I found that a Harley was ‘it’. Ever since I was 17 or 18 years old I had a ‘special’ for the Harleys. I especially like the mechanicals. When I open up an engine, and see everything, and find out how it works, well that’s just fantastic. It’s why I really like the WLA, you can easily see how everything works.”

This is Jose’s first WLA and he has owned it since 1987. “I bought it Albury where it had been used on a farm and it was a complete basket case. It wasn’t just in bad condition – it was in no condition at all! It wasn’t running and many of its parts were missing. It had been used around a farm and on a lot of dirt roads. It was very run down. Unfortunately the ‘before’ photos have been lost over time, but it would surprise you to see what a state it was in.”

Then Jose brightened, “It took me quite a few years to find everything that needed replacing on the bike. I was lucky that I travelled to the USA a few times back then and the parts were easier to find. It took me about five years to get the bike to its current state.”

“I also liked the challenge of improving things as I restored it. I’m still doing that now. I’m still working on it.” He calls the project, “Incomplete”.

“Every time I find something that will benefit the bike or add to its safety, I add it. As you probably noticed it has indicators now, purely for safety. I modified the Driving lights and headlight mountings and made new brackets especially - and I rebuilt the seat on the original base and re-upholstered it to suit.”

“Then there is the exhaust system. I had problems with the junction of the two pipes on the standard system. There was a right-angle join where the two engine pipes met and it used to burn through the under side of the join. So I made two separate pipes and used original ‘Civilian’ mufflers.”

“The difference between Civilian and ‘Military’ WLA mufflers was that the Army bikes had fishtails”.

It is also worth noting that as we rode along with Jose to take the photos that the bike does sound absolutely fantastic, with a deep, rich rumble.

Jose also pointed out that “Another difference between Military and Civilian models was that when Harley stopped making military models they started supplying the bikes with an extra support on the rear guard - for the addition of a Pillion seat. It’s interesting because this particular bike’s frame numbers indicate that it was made in September 1942, however the engine was replaced with an original unit, but from a later model’s, some time in early 1960’s.”

The paint on the bike is a cream on cream combination that Jose chose to emulate the look of a WLA that was supplied to a range of Dealers in the US. “In the beginning there were only two colours available, black and green, then they added a ‘little bit lighter green and a little bit lighter black’ but those colours were dull, so they were repainted in very popular non-original colours for the domestic market.

Jose has a number of future plans for the machine. “I will improve the clutch system. The foot clutch is rather ‘romantic’”, He smiles. “It looks OK, and I like the levers and everything, but for practicality and safety I’m working on a new system with a hydraulic hand lever-operated clutch. It will involve a new actuating rod. I have already installed an original lever from the right hand side and mounted the cable. For those that aren’t familiar with the controls on a WLA-42, the set up is completely different to a modern bike. The throttle is still on the right hand twist grip but the front brake was originally on the left. Also on the left hand is the firing advance and retard control that needs to be co-ordinated with the throttle. The rear brake is on the right foot and the clutch is on the left pedal. The gear change is a suicide shift next to the tank. As you can imagine this takes a lot of getting used to after riding modern motorcycles. A hand lever clutch will make the bike safer. All that’s left to do in engineer that actuator.”

“Riding this bike takes practice and you have to practice a lot. If you do practice it’s not a problem, but the real issue with this type of bike is when there is a lot of traffic. Because there is no ‘ventilation’ it gets very hot and then it gets very hard to keep it in tune with the manual advance and retard. However for a man my size it’s perfect because it has the lowest saddle height of any Harley I’ve ridden. I did have a beautiful 2003 Road King too, but I found it to be a bit too heavy for my liking. The WLA is much more manageable in that way.”

Overall Jose describes his journey with this awesome WLA as a “Real adventure and a learning experience. In the beginning I didn’t have much knowledge and I didn’t know where to find things out - where to source documents, manuals and information. It was very different to go from European to American bikes and it was also very different to today. There was no internet or search engines for example. I learned by going to Bike shows, swap meets and events and talking to many people. This is where the real knowledge is. You find out what goes with what - and whatnot.”

He summed it all up nicely. “Maybe I don’t have knowledge on a lot of things, but on the bikes that I touch, I like to know everything – every part, nut and bolt.”