Tiernan’s His and Hers Low Riders 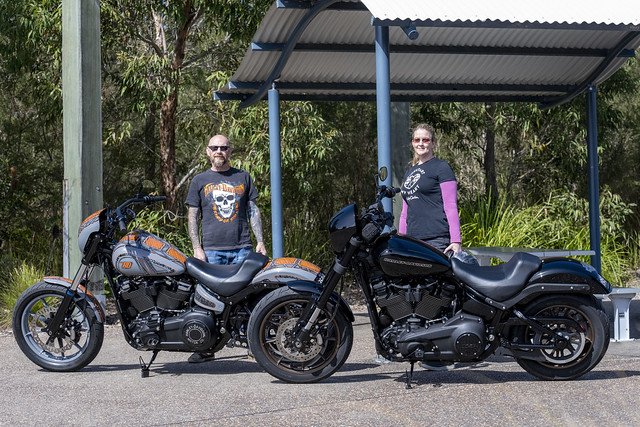 Carl and Julie Tiernan have a pair of Low Riders built to handle.

When Carl posted a pic of his FXLR Low Rider on the HEAVY DUTY Facebook page I thought it looked fast - and interesting, so we set up a meeting at Sunshine Coast H-D so I could find out more about the bike.

When he unexpectedly arrived with his wife Julie on her modded 2020 Softail Low Rider S, we sat down on the benches out in front of the store to talk about this great looking pair of Harleys.

I sat looking at the bikes parked next to us for a while, impressed, and eventually asked Carl to tell us what he’d done to his bike.

“It’s a 2018 Low Rider that I bought from here (Sunshine Coast Harley) brand new, and it’s been through quite a chop since I’ve had it”, he began.

“It’s been built to ride, so it’s been lifted two inches, both front and rear. It has Ohlins forks up front and a Low Rider S shock at the rear, with seamless pre-load, which was actually out of Julie’s bike – to which I added a Bung King extension for the lift.

The Ohlins kit is standard, but extended with two-inch over fork tubes. I also upgraded the brakes with a Hard Case Performance 14” disc and fitted Goodrich HH pads and lines to the stock caliper.

The handlebars are H-D Street Slammers, with 2” LA Chopper extensions, the fairing is just a generic aftermarket that took a little bit of modification, but it fitted the look I was after really well and the fork covers are home made too.

The tank is stock Low Rider, but the gauges have been removed, the holes filed and smoothed, and the original speedo has been mounted on the handlebars for better visibility.”

“Was that a complicated process?” I asked.

“No, not really, I’m a Panel Beater by trade, so all that sort of stuff came naturally. It was just a few hours mucking about really. I also chopped the rear guard in length and depth, so it now finishes level with the fender struts rather than hang down below them, and the tail tidy is all built-in and welded into the guard with Coughlin LED Tail lights and a Custom Dynamics plate surround.

The chainguard has been modified top and bottom and it’s got a Low Rider S seat.”

“The motor has been mostly blacked out and it’s running a CR480 cam, with high performance Feuling lifters, Cyclerama billet tappet cuffs, adjustable pushrods, and an oil pump from a 2020 Softail. It’s still a 107 cube, but it’s putting out 110 horsepower and 121ft lbs of torque. So it’s ‘pretty good’ for a 107, she goes pretty well!

The Paint and colour scheme is all Carls own work. “It’s a Nissan Grey Pearl and it has my custom work over the top - and the wheels are stock, painted to match.”

When asked if there are any further plans for the bike Carl grins, “There’s always plans! I’d like to lift the back a bit higher and put an Ohlins rear shock in there, to finish the suspension off … a 124 Cube is on the cards, with a bigger cam and a few other bits for some more power … and a twin disc front end is probably the most important thing I need, because even with the setup on it now, I still run out of brakes if I’m pushing it hard. And it will probably change paint again. 17” rims might be a nice conversion too.” He grins yet again.

“Apart from that ride the wheels off it, that’s about it. And it does get ridden quite a lot, it’s got 63,000km on it now, it’s not a bike that just looks nice, it gets well-used, and between it and my other bike, an Indian FTR1200 Carbon, they are true everyday riders. And yeah, I like bikes that stop and go around corners.

And that’s what this bike is about. It’s very nice to ride actually, it’s a big improvement over a stock Low Rider, with better handling, and the cornering clearance is so good it very rarely scrapes any hard parts.”

Which seemed like a good time to ask Julie about her Low Rider S.

“I’ll let Carl tell you about it.” She said, “He’s better at the mechanical aspects.”

And he beams. “Julie’s bike is a 2020 Low Rider S and we have fitted fork shims up front so we could lift it by an inch and a quarter. It’s got an Ohlins cartridge kit in the front, it also has an Ohlins HD505 rear shock with 1.5” lift and it’s fully adjustable.

The tank is off a Breakout and it has a Street Bob dash and instruments, because like when you guys tested the LRS, she didn’t like the tank mounted instruments – so we moved them onto the handlebars.

It’s got Thrashing Supply 6.5” pull back risers and Thrashing mid bend handlebars that go really well with the line of the bike. That’s also helped by the modified rear guard that’s been cut and had a Custom Dynamics plate holder set into it.

Peformance-wise it’s pretty much stock. It does have the Performance Machine Max HP air filter, Radical Radius pipes and a maximus tuner.”

This time she smiles. “It’s really nice now that the suspension is on there. The Ohlins really made a huge difference to the way it handles. I don’t get to ride it as often as I’d like due to being a shift-working Nurse, but I didn’t want to be on the back of Carl’s bike anymore, so I do get out on it when I can.”

When asked if there’s any further plans for the bike, she notes, “The rear wheel is going to be … bigger.”

At which stage Carl adds, “Yes, we’re going to fit a 200-section rear tyre and the rims are going to be painted, along with the rest of the bodywork. I’ve just got to work out how to do it the way Julie wants it.”

At which stage I suggested that we should mount up and go and take some photos.

“Before we do, Dave,” Carl said, “There is just one more thing I’d like to add, and that is to give big thanks to Brian Farrow and his crew at Farrow’s customs. I can do most of the work on these bikes myself, but when I have got stuck on something, Farrow’s have been a fantastic help, and nothing is too much bother. I highly recommend them.”

And with that sage advice we headed towards the hinterland and a photo shoot with Julie leading the way.