Road King Special - Part 3: Not Quite Epic, But Not Mundane. 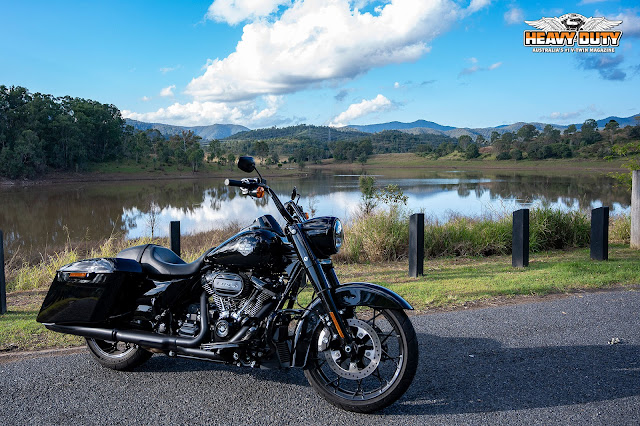 It doesn’t take a lot to make me happy. Somebody else’s near-forty-thousand-dollar Harley-Davidson and an excuse to ride it and I’m all good.

Tuesday in Brisbane was mostly sunny, so I got my work backlog (almost) sorted by lunchtime and invented a reason to go for skids on the Road King Special Press Bike.

“I have to shoot some video, an introduction to the bike and some interesting roads for fillers,” I told the dog.

That took care of the excuses … err, reason, not that anybody really would need one to ride this bike.

Being aboard it is reason enough, but it was a good day to make the most of Brisbane’s best motorcycle route.

The dog gave me 'that' look and went back to sleep. I leathered up and packed some cameras.

Southeast Queensland is blessed with plenty of good riding roads, but they are mostly in the Gold Coast and Sunshine Coast hinterlands. Which means an hour or more of Freeway from my place before it gets interesting.

Luckily, Brizzy has Mt Nebo and Mt Glorious nearby, just to the west of the metropolis.

Otherwise, with a few exceptions, it’s urban sprawl to the North and South, Moreton Bay lies east, and it's mostly flatlands further west.

So, Mt Glorious it was … again.

Even so, from my place it’s still 45 minutes of cross city ride to get to The Gap and the start of the ascent.

Not that that’s an issue on the Road King. Even with the stretched panniers it’s still a reasonably narrow bike due to the bars being not that wide at car mirror height, so lane splitting at the traffic lights is viable.

It deals with stop-start traffic quite well too. Long-gone are some of the things you used to have to allow for (or put down to ‘character’) on a Big Twin.

Things like the clutch getting heavy at the lights, fuelling getting cantankerous when it got too hot or having to row the gearbox up and down to find neutral – all that is a distant memory. The gearbox is crisp, neutral is easy and the motor didn’t stumble once. 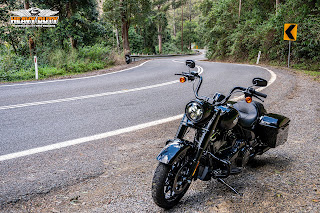 The Special has a cable actuated clutch. The tourers went away from hydraulic clutches due to an oil migration issue a few years ago. To me, the hydraulic units felt a little nicer, you can feel a slight notch occasionally through this cable’s lever, but it’s only a very minor difference. It showed no sign of getting heavy in slow going.

Once out of the city, and the heavy unexpected rain shower, there are other complications to consider heading up the hill.

Mostly the Police, who patrol the posted speed limits vigorously. Another is the state of the road after all the rain and flooding that Brisbane experience last month.

The Road King is one of those bikes where buttoning off doesn’t adversely affect the enjoyment of the ride.

It’s competent and very enjoyable at the speed limit, as many naked bikes are.

Sure, fairings and screens make it more comfortable and easier to go further faster, but often make doing so less rewarding or ‘immersive’. It’s the main reason I prefer nekkid bikes generally.

With 158Nm or torque available at 3250rpm the climb up the mountain was effortless and relaxed.

Once I reached the plateau the other thing that really came into play is the suspension. The tarmac in places is water damaged and occasionally broken.

There were six single-lane closures with traffic lights due to roadworks on this crossing. But over the rough sections the 49mm dual bending valve forks and ‘premium’ rear shocks soaked it all up quite well.

If this was my bike, I’d put some longer-travel shocks on it, but since the advent of the M8, the tourers have had far less likelihood of spine jarring hits from the rear end. They are pretty good now.

At the top of the hill, I detoured onto the Samford Road and went partly down that descent, turned around and climbed back up the mountain again - mostly for the hairpins.

Going down the steep sections I really enjoyed the electronically linked braking system. It got a real workout too. I just leaned on the lever and let the machine share the load between front and back systems. The brakes are good.

Also worth noting is the cornering clearance. I thought it was surprisingly good (for a footboards bagger). I only scraped the footboards once on the entire ride. And that was mostly due to a stinky line caused by avoiding debris on the road surface.

Otherwise, I was hitting the 20kph signposted hairpins at 50 and making no contact. The bike is well balanced and nimble enough that those speeds don’t feel excessive either. It just feels solid and reliable.

It has cornering enhanced ABS, traction control and a drag torque slip control system as standard. I didn’t employ any of it, but it does add some confidence knowing that those enhancements are there if needed, particularly with the way some sections were strewn with loose stuff from the water damage.

The only thing amongst the safety enhancements that I think Harley hasn’t got quite right is the hill hold system. Sure, if you’re forking out the coin for a bike like this you *should* have more than enough experience/skill/nous to manage a hill start.

But there are times that I find it is a useful feature. I like it mostly when I am faffing around trying to operate the remote garage door opener on my sloping driveway.

The problem with the H-D system is it only works when the bike is in gear, meaning you must hold the clutch in for it to work. If you put it in neutral, the system disengages. Which kind-of defeats my application for it. Other’s milage may differ.

Back up on the plateau the Café was closed, so I trucked on through to the descent on the Dundas side. The ride through the rainforest is delightful, constant stops for roadworks notwithstanding. By this stage I was so far into my happy place I simply didn’t care.

Heading down the hill for the final time there are several side-to-side, increasingly tight corners and they were very rewarding too. For such a big girl (366kg wet) it’s surprisingly easy to chuck around. 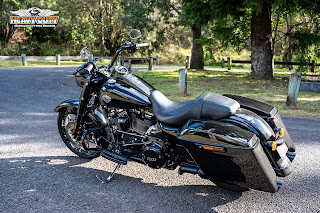 The boss says he doesn’t like the look of the low-profile front tyre. After riding it in these conditions and the way it steers, I personally wouldn’t change it.

At the bottom of the hill, I wheeled south towards Fernvale and the open road on to Ipswich and the Freeways.

After a few hours of putting in, I was now starting to appreciate the bike’s comfort features. I moved feet and leg position about on the footboards, used the lower-than-previous-model’s crash bars as highway pegs, dialled in the cruise control, settled into the plush saddle, locked elbows on the mini-apes and rolled away some klicks.

Just on 200km in total and 4 hours by the time I messed about with cameras and a work phone call.

The sun was quite low by the time I got back to base, but boy was I happy … and thanked goodness I’m just a simple man.

This bike makes it so.

Some on board footage: