Livin' with a Pan America 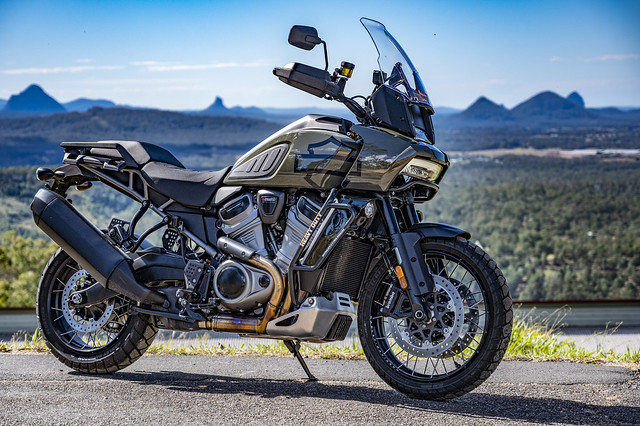 This motorcycle seemed like it was a long time coming. From the first rumours online, to the initial PR blurb, to pre-production units doing the rounds of the trade show, to finally throwing a leg over it – seemed a very long wait. Probably becuse as I was looking forward to it so much.

The anticipation stemmed from some of my earliest gigs as a moto-noter, where Adventure-style riding (or ADV as we aficionados call it) became a preference.

The Kiwi crew I was working with way back then were hard-core enthusiasts. They would plan routes up and down New Zealand, invariably taking what some people would call ‘the worst roads they could find’. Preferably unsealed, ideally remote, usually rough, mostly unkempt, and always sparsely travelled.

Although not as skilled as the professionals I was accompanying, they often included me as the photographer and scribe to record these ‘epic’ events.

As such I was introduced to a pretty good variety of European and Japanese Adventure machines to tag along on. A range of BMWs, Suzukis, KTMs and Triumphs all graced my garage at some point. Then when the Buell XB12X Adventure bike was released, I had to have one, and spent the next five years in a similar search of the ways less travelled of my own.

Since we moved home to Aus in 2011 I’ve had my own Adventure-style bike in the garage too. Usually parked next to the current HEAVY DUTY test bike.

So yes, I was seriously riding the Pan Am’s specification sheet long before it arrived and studiously gleaning whatever info I could.

But now that I’ve been living with it for a few weeks prior to this edition going to print I can sum up the experience very easily. With three words, in fact.

It’s no wonder that reports from all over the online motorcycle world are full of reports of sales of this motorcycle going gangbusters.

It’s an absolute ripper. A technological masterpiece. For the full run down on its levels of inclusion, specific ride modes, specifications and the included tech, have a look at Mick’s launch report in Issue #177.

What I’ve found in Qld conditions is that it is fast, capable, handles beautifully, stops superbly and is very competent.

The first week comprised mainly highway and back roads riding.

I ventured into the cane field country between Brisbane and the Gold Coast or headed out through the floor of the Scenic Rim to Boonah and beyond. Mainly enjoying its capability as a touring bike while racking up plenty of freeway and open country roads – and it was great. Even without its Adventure riding capability the Pan Am is a great touring bike.

The motor is smooth, strong and very responsive. The cruise control is what we’ve come to expect from H-D. The infotainment and navigations systems are phone-based and work better than any other Harley I’ve tested. The Street and Road Glide built-in setups are good, but not as reliable as the Pan Am’s.

It’s simply a matter of pairing your phone and a headset to the bike, opening a playlist or opening the (much improved) H-D app, and then turn by turn instructions can be relayed or your music controlled from the toggles on the right-hand switch block. Superb.

Although the bodywork, front fairing and screen have been much maligned for their aesthetic, they all work very well and actually do look much better in the flesh than in pics. The best part is that even for a tall guy, there’s no buffeting, minimal wind noise and very good comfort.

In fact, the whole bike is very comfortable – with one caveat for the taller gentleman.

Although the bike is tall overall, and the very clever adaptive suspension lowers the machine for easier flat footing, the peg to saddle height once aboard is only around 470mm.

I do get a bit of knee ache after a few hours. But that will shortly be rectified with the genuine ‘Tallboy’ seat and set of 2” risers that rare currently winging their way northwards from HD-A HQ.  The latter will make standing up when going full ADV a lot easier. Updates to follow next issue.

The stock seat does offer some adjustability and can easily be lowered a few inches as well - plus there is also a reduced reach seat option for shorter inseams too.

When our pal Mark ‘Ducky’ Duckworth sent me a message along the lines of “When I saw you ride out of Gasoline Alley on it the other day, I went back inside and had a closer look at the bike – and I bought a grey one.”

A week later the two of us were making our way on two Pan Americas towards Canungra.

The plan we had cooked up was to go full ADV. To explore the narrow, twisty and quite spectacular road that lies beyond the town, the one that leads to O’Reillys and the top of the Lamington National Park range.

From there we’d check out the dirt section on Duck Creek Road as it leads back down to the valley floor and to the Kerry road south of Beaudesert.

The ride up the range and the views across the Scenic Rim district were majestic. The road was tight, narrow and twisty with multiple 10kph hairpins.

When we doubled back to Duck Creek turnoff, the sign said ‘Road Closed Ahead’, but the first section through the rainforest looked so inviting that we decided to go as far as the closure point.

We never reached that point. We ended up going all the way to the end and it was a superb test track for the bikes.

The road is marked ‘4WD only’ and by the time we got to the descent proper we were dealing with heavily eroded, extremely rough and very challenging conditions, it was very hard going at times - and the bikes were simply brilliant. Both bikes just nailed it.

The centre stand did touch down a few times going over big ruts, but otherwise it didn’t bottom out, the suspension and traction control was impeccable, the linked ABs was supremely confidence inspiring and the balance and feel of the machine was quite remarkable.

As were some of the sights and outlooks we took in along the descent.

When we got to the valley floor and the roads that snake their way through the rich black alluvial soils of prime cattle country, we shifted back to highway mode and made good pace back to Beaudesert, enjoying each and every kilometre of it with wide grinning joy.

This is a Harley that does it all – very well. We’ll be adding more genuine accessories and options to the bike over the next several issues to really trick it up.

Part one my deadline-driven time with the bike had reached a very satisfactory conclusion with expectations well-and-truly exceeded.

The dictionary defines  ‘Pan-‘ as a combining form ‘all-inclusive, especially in relation to the whole of a continent.’