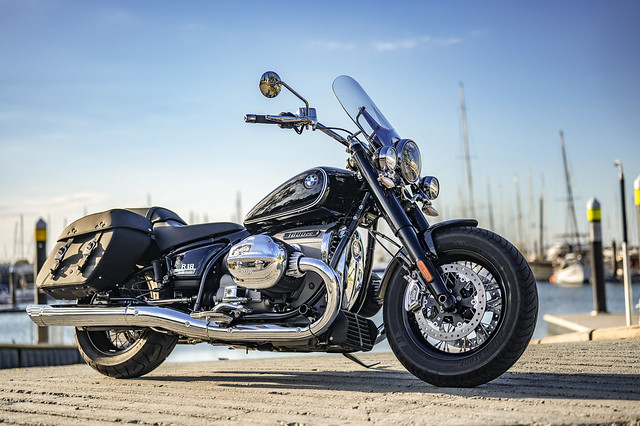 My Editor, Mick was originally going to write the Quick Spin on the BMW R18 Classic but the Sydney lockdown put the kibosh on that plan and after he managed a few short work rides the machine was trucked up to Brisbane.

Sure enough, while it was in transit Brisbane suffered the same stay home fate.

So the black Bavarian sat in my garage for the best part of a week while I had plenty of time to get to know all of its settings, buttons and inclusions.

It was very well detailed and polished by the time the curfew did finally break up north and eventually I did get out and got amongst it - and just like the R18 First Edition ‘Standard’ tested in HEAVY DUTY # 175, I found the bike is very enjoyable to be aboard.

It has a great engine, very relaxed manners, a good level of inclusion and overall comfort (with one or two exceptions). It’s a feel-good machine with a ride and ergonomic that has a definite old-school appeal.

The most obvious differences between the first R18 we tested (let’s call it the ‘Standard’) and the Classic are the touring inclusions, some extra ride and safety accoutrements and a more conventional-looking exhaust system. The bulbous fishtail styling of the Standard was easily the most contentious part of that bike. This example is fitted with much more orthodox cylindrical mufflers with what BMW calls an ‘elongated end silencer’.

The Classic has also been fitted with a fatter front wheel. The Standard runs a 120/70 19” front while the Classic has a 130/90 16” - and the difference is steering quickness and cornering ease in noticeable with the smaller diameter hoop. It doesn’t seem to have had any effect on Freeway stability or rougher surface riding as the bike remains very well planted and stable on the road. Enjoyably so - and it still tips in very confidently within the limited lean angles that the bike offers. Both bikes have 180/65 B16 rear rubber.

The Classic is fitted with compact foot boards and like the Standard’s mid control pegs, touching them on the deck is a reasonably regular occurrence in normal riding.

But you don’t buy a R18 for canyon carving, its clearances are similar to an older Softail or a Fat Boy Lo, but what it does do well is roll away most Australian conditions with pretty good comfort, style and top-notch tech.

As with most windscreens, above average height riders will need to fit a taller unit from the get-go or look at extending the standard screen to get below the buffeting. I found the easiest fix on the test bike was to simply remove it. And it is very simple to remove or replace via two levers on the light bar and the locating sockets on the top of the fork legs.

The other issue that Mick and I both had with the bike was to do with our rather large boots on the relatively small footboards. Whilst the boards do add a degree of cruising comfort and mean that one’s feet can be slid further forward than with the pegs, the combination of footboard and its proximity to the horizontally opposed cylinder mean that there isn’t a lot of room for the gear lever – and we both had issues fitting our big hoofs ‘around’ it. If it was our bike, we both would go back to the Standard’s peg arrangement – which worked perfectly. Smaller shoe sizes probably wouldn’t even notice it. Only a test ride would tell.

Otherwise, this bike works really well. I really like its presentation, lines and look, but most of all I like the big Bavarian Boxer and its drive train.

It’s a very strong-feeling power plant that is quite smooth throughout the rev range – but still has enough vibration to remind you that you are sitting on top of a very large twin, especially at idle where if you take hands off the bars the whole front end rocks from side to side with the engaging pulse of the big donk.

The gearbox is crisp and precise, and the exposed shaft is my preferred method of any final drive. It’s solid, direct and slop and lash free in normal operation. It can be made to rattle, but it needs a dedicated effort to make that happen, whilst it’s virtually maintenance and adjustment free, doesn’t need regular lubrication or won’t break if it encounters an errant rock or stick. The bright metal exposed shaft and universal joints on the R18s are quite visually interesting too.

Mounted to its double cradle tube frame, they offer a reasonably firm, but comfortable ride, one that is well suited to the upright riding position. BMW claim a minimum range of 290km from its 16 litre fuel tank and the saddle is comfortable enough to make that viable without stops. The saddle height is 710mm in running order and a lower option is alvailable.

Even with the footboards it’s still a mid-controls style with no option to move them forward because of the very attractive big lungs hanging out each side of the engine. But in concert with the wide pulled back handlebars sitting on 80mm rear set risers it feels somewhat like riding your favourite spread out, knees-in-the-breeze machine from the 70s or 80s … but better – much better.

It also has high tech and safety enhancements that those older machines simply couldn’t fathom.

The cruise control is the best I’ve used on a motorcycle. It has ‘resume’ or ‘set new speed’ options from the toggles on the left hand switchblock. The three switchable riding modes ‘Rock’, ‘Roll’ and ‘Rain’ adjust throttle response and ABS also from a button on the left-hand block.

The trip computer functions and displays are skewed a little differently from American cruisers, but still offer an array of information from the digital display mounted in the compact analogue instrument dial with its proud ‘Belin Built’ declaration inscribed on the face.

At 365kg wet the Classic is 20kg heavier than the Standard, part of that is the large leather saddlebags which aren’t lockable – but do come with a handy removable inner bag. Part of it is the windscreen and part is the traditional cruiser/tourer light bar with an array of effective LED driving lamps. Adaptive lighting is available as an optional extra. The reverse assist – it will back-up with the starter motor - helps mitigate the extra weight.

From the way the security fob is built into the key, to the way the cylinders point in different directions, the BMW R18 classic is a different kind of touring bagger to pretty much everything else in the marketplace currently – American or Metric – but what it does, it does most enjoyably well.

If you are a bit of a black sheep looking for a different style of ride, it’s well worth a closer look.