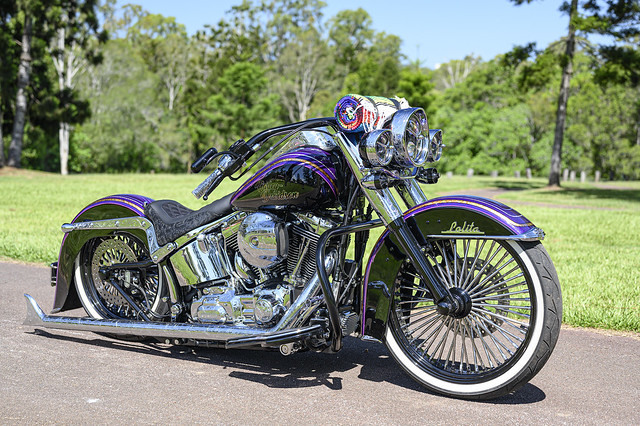 ‘Baldy’ tells us that there are people at his work that have known him for 21 years and still don’t know his real name. I wasn’t able to establish it either, but I did learn about Chicano style, high quality motorcycle engraving and just what a stunner his 2012 Softail Deluxe, ‘Lolita’ is.

We’d just done a Photo Shoot around Petrie Village, North of Brisbane in very hot and sunny conditions so we headed to the local watering hole for some rehydration and so I could get the story of this multiple Show-winning machine.

“It’s Spanish for good looking girl or Spanish mistress, and it went well with the Chicano-style bike. It was in 2011, was Black in colour and dead stock.” He began.

“About three years ago I added the Ride Right heavy spoked wheels, Sampson Fishtail pipes and took it to Stage 1 with a Power Commander, K&N Air Cleaner and a tune.”

“Then we did the paint, or Rather Nathan from ‘Livin’ Loco Garage’ on the Gold Coast did the paint. As you can see it’s a fantastic job, a very intricate job that’s been done to perfection. I can’t recommend him highly enough. The finish also features Custom Free Hand Pin Striping With Variegated Opal Gold Leaf inlay.

I also stretched the rear guard, while the front is standard.

The we added Shotgun Air Ride Suspension on rear and Dirty Bird Air Suspension to the front - although the front is out for maintenance at the moment,” he continued.

“Then I saw some stuff that had been engraved and thought, ‘That’s It!’

Once I’d had a couple of little things done, well … I got them back and saw the quality of the work I knew I had to get more done. I use a company called ‘Precision Engraving’ in Texas and I couldn’t be happier with the service and quality of their work. Even the after-sales service is really good. The owner’s name is Ezekiel Garcia and you can find him and his business on Facebook.

Basically, I stripped the bike of all the parts, sent them to the States, they took about 4 months to complete the work and then a month to ship back. So, it took about 6 months in total.

They stripped the chrome, polished the steel, engraved it and then re-chromed it. American chrome is better than Aussie stuff for a number of reasons. You can see it in these parts.
So far, the outlay on the engraving has been around $10,000.

They describe the process as similar to tattooing the metal”.

The Engraved Hand Grips were custom made in Indonesia.

The rear swingarm was chopped and re-laid by Jake at King Brown Fabrication. The Saddle is a Custom Le Pera and it all fits perfectly with the look. So too does the Hog Lights Headlight array.

When I asked him what he had planned for the bike next he laughed, told me about his Sportster Lovin’ wife Katrina’s attitude, then mentioned confidentially that he’s, “Thinking about getting the oil tank done. I’ll buy another one and send it for engraving.

And I wouldn’t mind buying another set of tins, so I could stretch the front guard and fit a 23” front wheel - and be able to swap bodywork and make it look like a different bike.

The handlebars are Buffalo Beach bars but they were a bit too wide for me, so I heated them up, put them in a vice and bent them in to 890mm, so that’s why they are a really rounded shape - now they fit great. But, I am thinking about getting a new set in two inch diameter so I can hide the cables internally.

But, at the same time I’m a bit ‘over’ the bike being in bits. I just want to ride it.”

And ride it he does. A saw this immaculate show bike ride across more than one paddock during the photo shoot.

“So far the bike has won around 26 Trophies at 15 different shows – and it’s won in just about every category from Best Paint to Best in Show. Now I just want to ride it.” He reminded me – or himself.

And who wouldn’t want to ride it. It sounds great with the fishtails, has more bling than I can recall seeing on a motorcycle and still has an engine that performs like a normal and very rideable Harley.

It’s a great example of its kind and a real credit to the bloke we know as ‘Just Baldy’.

Finally, I asked him for his words about the style and vibe of the bike.

“Well, Cholo Low Rider Style it’s called and I really liked the look from the moment I saw my first one. So I decided to build one.” Then after a pause he added “It rides a little bit rough because of the suspension and slammed rear end, but you can put up with it for the looks you get” … and he smiles.