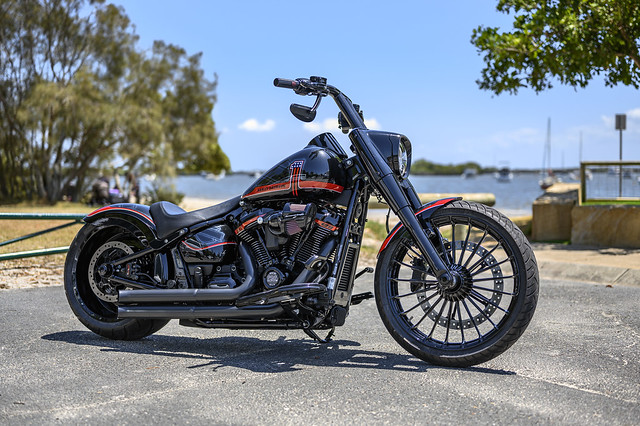 Wayne’s World
A custom Fat Boy made to sport a grin from ear to ear.

The message from Steve Schilling at Gold Coast Harley-Davidson said “Dave, we’ve got a build that you will be very interested in.” And he was absolutely spot on.

A week later I was sitting down with Wayne Jardine discussing his fabulous Custom Fat Boy he’d only just picked up from the Dealership where it had the finishing part of the build, the final fine-tuning dyno runs.

“I’ve had a bit experience with Gold Coast Harley before.” Wayne began. “I’ve bought a few bikes off them previously, like the Street Glide I’ve also got in the shed, but I’ve seen the quality of their custom builds and I particularly liked what they did with the Hollister Riot bike that you featured in the last Heavy Duty. So, I pretty much gave them a free rein to build me this bike. I basically knew what I wanted: A Fat Boy, I love the Heartland look with the fat rear end, I wanted a nice paint job and nice, sleek, clean lines … and a bit of hurry-up!” He says with a laugh.

“But, seriously I wanted it to ride well and look good, but ride-abilty was a very big part of it. To be able to get the power to the ground and also to get around corners, and just be rideable.”

Then we then ran through the list of improvements, customisation and inventory of the build.

Up front it’s running a genuine Turbine front wheel off a Breakout. The whole front end has been fitted with a genuine black-out kit, as has the motor. The front suspension is stock which is testament to the quality of the standard Showa forks now. The Brembo twin calliper brakes have been upgraded and enhanced with Arlen Ness Big Rotors.

The impressive looking and beautifully made handlebars are Burleigh ‘Straight up T-Bars’. They were custom made for this build and are internally wired and cabled with Genuine Harley Diamondblack Cables. They give a clean line to the bike from all angles - and a very comfortable riding position, but more of that later. The grips were upgraded from the Defiance Collection as were the Foot boards. “Just like on the CVO and all the levers and controls were blacked out to.” Wayne added.

To get the desired ‘Hurry up’ the engine has had a S&S 128Cu.i Big Bore Kit fitted with a Screamin’ Eagle Heavy Breather, Bassani Pro-Street Turnout exhausts and Maximus Tuner. It all adds up to a magnificent-looking motor that runs out 126 Horsepower and 149Ft. Lbs of glorious torque. Its blacked-out finish is enhanced by a matching Genuine Coil Cover. As Wayne reiterated “The goal was rideability in all types of conditions with heaps of mid-range torque and the build has absolutely achieved that.”

The rear end treatment includes a Heartland 260 Rear End Fender, seat and side mount number plate while the genuine rear wheel is from a FXDR and has been powder-coated in black. It also has excellent Platinum Air Ride suspension which can be pumped up for good clearances while riding but also allows for quick, easy lowering and the slammed rear end look when the bike is on show. It’s a great system.

The stunning paint job is by Mark Walker at Queensland Motorcycle Panel and Paint and it is typical of his work. “I just had a colour scheme in mind with black and red and I wanted it to match the graphics and colours on the heads of the S&S Motor. Mark went with it, came up with the design and has absolutely nailed it.” Mark noted. The flow of the stripes and contrasts in the paint enhance the line of the Fat Boy perfectly and the way the Bar and Shield logos are masked out in metalflake is really stunning.

The whole package is beautifully put together and presented and the finishing touches are subtle but effective. Genuine flush mount fuel caps, axle covers and Rollies under perch indicators help keep the clean and uncluttered theme.

All of which led to the obvious question, “How does it ride?” At which Wayne Grins and says “From the moment I jump on it till I get off it I’m just grinning. We really have kicked a goal as far as making a great looking, high performance Harley that is still very, very rideable. It handles really well; it goes great and has brakes that pull it up nicely.”

I then rather rudely asked, “How much does the build owe you?” To which he candidly replied, “We got a pretty good price on the run-out 2019 Fat Boy, so including the price of the bike and everything we’ve done to it, it cost around $63,000.”

At which point I suggested that we should head out into the Cane fields and get some photos. After we’d done a few ride-by’s Wayne handed me the Fob and asked if I would like to take it for a ride. Almost immediately I agreed with everything he’d said about riding it. It is very grin inducing with heaps of grunty torque and a very, very pleasing power delivery. It’s tractable, smooth, comfortable and the bass growl of the Bassani system makes your heart sing along with every throbbing note. It really is an absolute joy to be aboard.

Back at base I got in touch with Steve Schilling at Gold Coast H-D and asked him for a quote about the build, here’s what he came back with: We have had the privilege of building some awesome Customised Harley-Davidson motorcycles in the last five years here, whether they are directly for our customers or for floor stock motorcycles, providing inspiration, but this is one of the best, and hardest builds we have undertaken. Wayne gave the guys involved (Jack, Matt and Jay) a brief on what he was hoping to achieve, and the rest was up to us. We were supplied not only the dream, but also the budget and as with a lot of builds we had to make adjustments along the way and maintain and achieve the brief. We were extremely lucky that Wayne gave us leeway, and freedom, but for more than half the build Wayne was in the USA, which meant that the ability to consult with the customer was not easy, and we had to make decisions and judgement calls on the fly. The final result is something that Wayne is very happy and proud of, as are we at Gold Coast Harley, and a massive thanks to Wayne for giving us this opportunity!

It's a great story on what has turned out to be an exceptionally high-quality build. One that will make you grin … vey widely.