The 'Game of Thrones' Softail 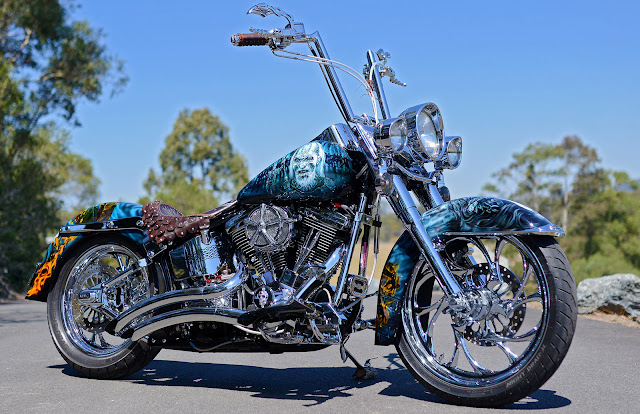 The first time I encountered the amazing ‘Game of Thrones’ paint job on Rob King’s 1996 FLSTC Heritage Softail Classic was while judging a Show & Shine event with my Heavy Duty Magazine hat on.

I simply had to award it a prize for the looks of the build and unique paint and suggested that we should hook up for a photo shoot to get the story of the machine into the mag.

A couple of weeks later we were at the Sirromet Winery South of Brisbane staging the pics and sitting down for a chat over a Coffee.

The first things I noticed about Rob was his enthusiasm for the project – and a little of his military bearing. When he started talking it didn’t take long to come out. “It’s been something to get my teeth into after I semi-retired following 2 Tours of East Timor and 2 tours of Duty in Afghanistan with the Commando’s and SAS”. The braids and medals on his riding vest tell that story. But we were there to talk about the bike. 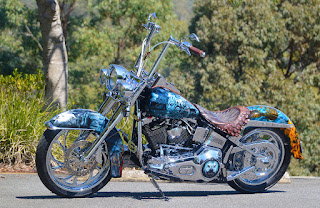 “I imported it from California about two years ago,” he began. “It’s a ’96 model and I wanted to do a few things to it. So I originally had it painted Pearl White with Candy Apple Flames, added a 21”, 60 spoke front wheel, 18” rear and a bit of chrome. I then put it in a few shows and won around 8 awards and left it as it was for about 2 years.”

“It had pipes and a little bit of head work, a small cam and the basic stage one set up and I haven’t done too much more than that engine-wise on the second rebuild. But I wanted something ‘different’ so I talked to a good mate of mine, Damien Gormly from Zealous Airbrushing in Brisbane and he’s the one that did all the paint on the bike currently.”

“He asked me if I had any ideas about what sort of theme or look I wanted. So I thought about it for a while and came up with ‘Game of Thrones’. I was introduced to the show when I was back in Afghanistan in 2014. I’d never watched it before, but I saw a few episodes and I was stuck. So I spoke to Damien and said ‘these are the characters I want on it’ and told him where I wanted them. There’s Khaleesi and her three dragons, Jon Snow, Dire Wolf, White Walkers and the Red Witch. We then took about a month to get the sketches together and work out a plan.”

“I then rode the bike into Damien’s shop and we stripped the whole thing back to a bare metal frame. He stripped the tank and got it ready to paint, we then set about modifying the tinwork and turned it into a Deluxe style front guard so we could use the Deluxe tip and surround. Same with the rear guard. We took the tail light and indicators off and fabricated a recessed number plate and fitted LED lights. That meant re-wiring the entire bike too. It took us another month or two to get it all re-welded and perfect for the painting to start.
From there I pretty well left it up to him. I gave him the rough design and he put it all together in stages. It took about six months to complete the job.” 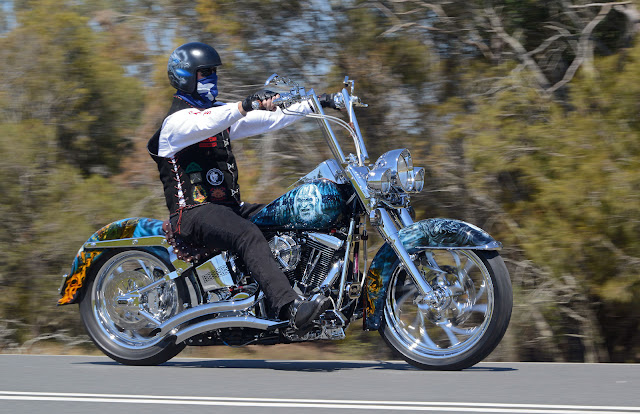 A few days later I called Zealous Airbrushing and got Damien’s side of the story too. He was just as complimentary about working with Rob on the project.

“It took about a month of full time work to do the airbrushing. It’s all laid down on a heavy duty base coat using House of Kolor Dyes with a PPG ceramic clear coat.”

I asked about a budget for this type of job and he said, “It obviously depends on how many characters and the backgrounds required, so it’s hard to say without planning it out first, but for a full theme job you should allow anywhere between $5,000 to $10,000.”

Back at the winery we started talking about the other features on the Heritage and I asked about the wheels.

Rob said, “They are RC wheels - 21” front and 18” rear, with a matching 72 tooth rear RC pulley. RC are an American Company that individually hand-makes their wheels to order. They provide a catalogue and you pick the wheels you want and they fabricate them from billet on order. They are then acid dipped and Chromed three times. They have three coats of hardened lacquer applied. Subsequently they cost around $3,000 each but they do come with a 2 year warranty. Not too many wheels offer that.”

Other mods include lowering the bike two inches and it’s got 14” Reaper handlebars with chrome controls, master cylinder and braided lines. It’s also running a polished 42mm Mikuni carburettor with an Arlen Ness air cleaner and LSD slash-cut exhausts and Rob says “It breathes quite well.”

“The saddle was made by another mate: ‘Crafty Daryl’. I said I wanted something a bit different so we came up with the Game of Thrones theme for the leatherwork. Because my surname is King we incorporated the ‘Iron Throne’ styling and it suits the overall look so well. It also took a few months to produce. The pleats on the side indicate the armour used in the show.”

I asked if it was comfortable?

But the Game of Thrones bike isn’t about that – it’s a pure show bike that has already accrued a number of trophies. Rob noted, “I’ve had it back on the road for two months and put it in four shows – and it’s won four awards. But I also have a 2013 Harley Davidson CVO Ultra Classic for touring and long distance work. The Show bike comes out for special occasions.”

And so it should – it’s a special machine. 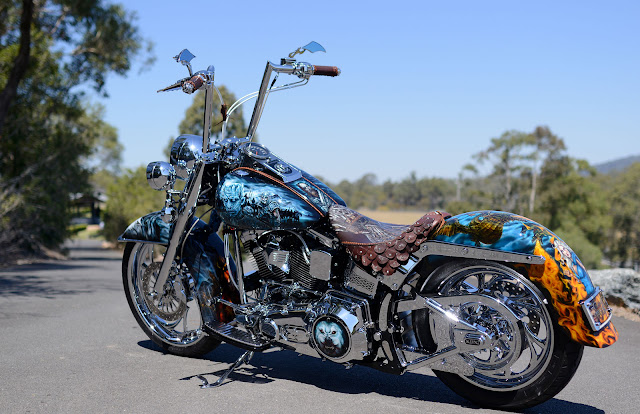