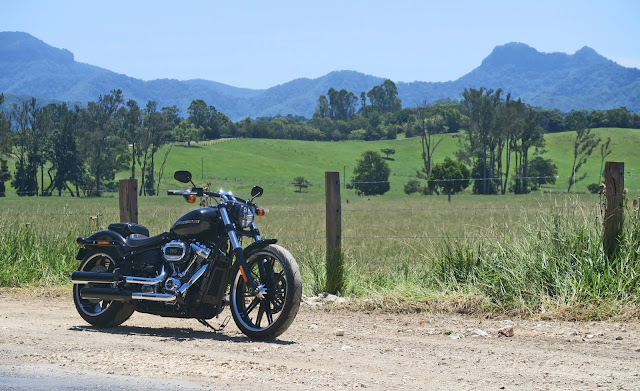 The original plan for Sunday was to meet up with the crew at Yatala and head out west to Maryvale and the Darling Downs, but the forecast temps were up to 38c so we shelved that idea and headed down the coast instead.
Spook said we were soft.
I said no “We are smart.”
As it turned out I had one of those day rides you could frame - it was ‘that’ good.
Outstanding from the point that I fully got to grips with the 114cube Breakout test bike, and partly due to the lush summer-green landscapes and awesome twisty roads we travelled by.
I left East Brisbane base before 8am and 40 minutes of Freeway later met up with Rowey and Tappy at Coomera. 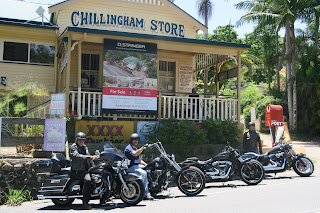 We continued on immediately a further 20 minutes down the M1 and hooked up with Roberto, Spook, Blackie, and Hughesie at Reedy Creek.
After a quick gasbag we mounted up and headed out through Currumbin and up and over Tomewin Mountain Road.
There were dozens and dozens of bikes on the Mountain – a passing parade going in both directions - really good fun - and although it’s 60kph speed limited it doesn’t matter too much because there are tons of 30kph speed signed corners in pretty quick succession.
We continued on through Murwillumbah, across the great set of sweepers to Burringbar and had a refreshment stop at the Mooball pub - a bit after 10am.
3 of the lads headed homewards while Blackie took the lead and Spook, me and Hughesie headed back over Burringbar, then turned left to Stokers Siding and on to the Tyalgum Road through the Oxley River Valley.
It’s one of those roads where the speed limit is posted as ‘Drive to the Conditions’ - so we did - pretty hard - because said conditions were absolutely perfect.
The Breakout hammered all the way. The 240 section rear fitted in the new Softail chassis makes it the most normal handling fat-arse bike I’ve ridden. I still tended to counter-steer it slightly more than a normal 180 section like the Sport Glide I’d ridden 48 hours earlier, but even so, it handles amazingly well for such a big chunk of rear rubber. To say it’s ‘normal’ is high praise.
I had also come to grips with the fact that the 114 vibrates more than the 107 cube variants I’ve been on recently. 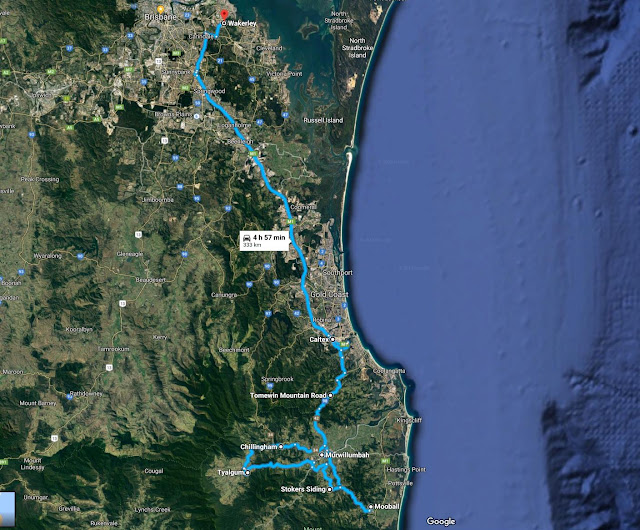 By the time we got to a drinks break at Chillingham Store around lunchtime I was completely in my happy place on the Breakout and very, very happy with the way it performed, handled and braked. The way it launches is a thing of beauty.
I also have some hard data regarding the most common question I’ve fielded about the bike so far. I fuelled up at Reedy Creek and got almost all the way home before the fuel warning light came on – at 250km – and the range computer was still showing 80kms left. 280km would be safe – 300km doable.
Considering this was a pretty green motor (3,800km) and after a lot of 110kph(ish) Freeway, plenty of hard country road riding, lugging a large payload (me) - I think that’s quite acceptable for a cruiser style motorcycle.
From Chillingham we headed back over Tomewin again (it’s good enough to do twice). We then made our way back to the M1 at West Burleigh and went our separate ways.
I cruised back up the M1 in very good comfort and was good to go even further by the time I got home mid afternoon and 340km later. The saddle was still as comfortable as when I set out and the forward controls and drag bars made for a riding position that works really well for a big and tall rider like me.
I still reckon it was a smart move. It was a great day and gave some good insights for the full Breakout test article coming up in issue 158 of Heavy Duty Magazine.