Not just any Sunday

Easter Sunday’s run on the Road Glide Special was another one for the almanac. A real high water mark - in more ways than one.

It was not only notable for the wonderful 435km jaunt that took in some of the most picturesque countryside on the Eastern Seaboard and the spectacular motorcycle roads that run through it, but also because the 2017 FLTRXS continued to prove itself as a truly outstanding, capable and delightful touring motorcycle.

And literally - from the evidence of just how high the floods from cyclone Debbie really were. 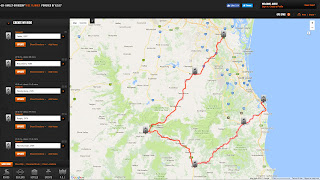 A planned and technologically enhanced route at that.

Because choosing the route for this ride had defaulted to me I spent quite a lot of time pawing over Google Earth on Saturday night - trying to come up with a suitably cunning plan for the lads.

Plan A was to have a look at the Lamington National Park loop and Beechmont, but a quick search of the main roads web site showed several road closures in the park, so it was on to Plan B: Look at the map and pick the twistiest roads I could find.

From Brisbane that generally means heading to the Sunshine Coast or Gold Coast hinterlands. The Sunshine Coast was off the agenda because of the Easter Traffic bun-fight coming home - worse than the normal every-other-Sunday afternoon bun-fight.

So it was Border Ranges here we come - again - but here’s the hi-tech angle.

In case you haven’t checked it out yet, Harley have a very good ride planner on their web site. Start by entering “rideplanner.harley-davidson.com” in your web browser and click on “Create my Ride” after the page loads.

From there it’s simply a matter of entering your list of places or waypoints you want to visit into a dialogue box – and they are automatically placed on the embedded Google map while the route is drawn. Now here’s where it gets really clever.

You can then export a .gpx file of the planned route, save it to a USB stick and then transfer the ride data to your motorcycle’s on-board navigation system via the USB plug in the right hand glove box.

This You Tube video shows how to import it once you have the data on the USB stick: https://youtu.be/5HLOgAYqVOo

So, with the ride wired into the Road Glide’s on-screen display I met up with Jason at Yatala and waited for Rowey, Spook and Hughesey to make their way north from their hook up at Coomera – and I was ready to navigate. (Although Rowey already knew the way and took the first lead.)

Well … almost ready to navigate. 10 minutes out of Yatala we had to turn back towards the Freeway and head north to Beenleigh because the bridge at Crystal Creek had partly washed away and the road was closed.

Then it turned out that Spook only got as far as Tambourine and he was called in to work. Then Rowey bailed at Beaudesert because he’d shagged his back fitting new footboards on his Road Glide the night before.

After all this, the remaining three of us looked at each other and mumbled maybe we take a soft option too, and head for a beer at Rathdowney instead. But fortunately we didn’t pillow and from Beaudesert we motored across the flat and relatively straight bits past Rathdowney to the start of the Mt Lindsay ascent.

Across those plains, over the very rough and irregularly corrugated strip of bitumen that the map calls the ‘Mt Lindsay Highway’ the Road Glide felt like it could do with a bit more rebound or damping on the front suspension. Perhaps it was due to not having enough pre-load on the rear shocks, but by the time we got to the climb up the mountain and started really chucking the bike around again it was back to feeling like a fine fettle. 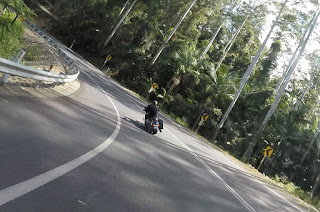 The climb up the mountain on the Queensland side is very twisty and the tarmac is quite rough. Jason took the lead and set a cracking pace on his nicely ‘breathed on’ 103 cube Street Glide.

And that’s where the day started to get really, really good.

I settled in tight behind and gave the Road Glide a good workout too. We had a charmed run with no traffic in front of us pretty much all the way up and over the mountain.

The Roadie was magnificent. Stable, sure footed and we hit a couple of big dips and hits on the suspension that didn’t throw it off line or cause any grief at all. Rowing it up and down the cogs and engine braking was delightful, the brakes did everything asked of them perfectly, without fading, and tapping the 107 out in low gear between corners was honey.

Hughesy on ‘Pearl’; his 2006 Ultra was in our mirrors all the way too.

Over the summit and on into NSW the road surface improves, but remains just as twisty almost all the way to the Summerland Way turnoff and the road to Kyogle. Note this road. It's mint.

Through the hamlets of Grevillia, Rukenvale and Wiangaree and on to Kyogle the sweeping road runs along the valley floor and the countryside at this time of year, after all the rain, is a spectacular shade of green.

The late morning sunshine was streaming through the stands of Beech and silver gums and it all was postcard perfect. It was almost a shame that we were having such a blast on the bikes that I didn’t stop to take a pic.

We did stop for a quick leg stretch in Kyogle before heading on to the Kyogle Road and our planned lunch stop at Uki Pub.

Kyogle Road: Another one to note.

I was quite rapt with the ride over Mt Lindsay. I think the run up the hill from Kyogle to Cawonga, Wadeville, Mount Burrell and on to Terragon was even better. The road was certainly in better nick and the countryside just as picturesque with Mt Warning looming - and through this spectacle I was still marvelling at how comfortable, accomplished and freakin’ nice the new Road Glide is to ride.

Ten Kilometres short of Uki the aftermath of the floods suddenly became apparent. Until there we’d glimpsed the damage as we rode by the creeks and smaller rivers, but when the road started to run alongside the Tweed, beyond Terragon, the scale of the destruction was remarkable.

Most of the Landslips and washouts along the roadway had been (partly) rectified, but the way the vegetation was pushed over - 10 metres above the waterline, and the chunks of missing tarmac and road seal that littered the way were cause for pause. Which is what we did at the pub at Uki, pause that is, but it was way too busy for bikers on a mission so we continued on to Murwillumbah and had a good feed at the (slightly damaged) pub by the river.

The flood debris that was still plastered to the handrails of the Tweed River Bridge was really the most striking example of a high water mark we encountered all day. 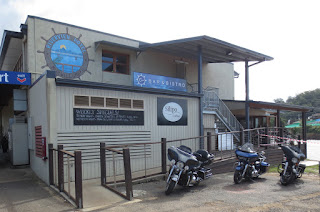 At the pub we did the usual motorcyclist routine, your first bike? Favourite bike? And all the other standard topics before Hughesey headed east and Jason and me pointed the baggers to the coast, on to the M1 and a run in reasonably heavy motorway traffic all the way back to Brisbane.

Including having to turn back for the closed bridge near Yatala I covered 435km in about 6 hours (with all the stops).

The tall saddle was still comfortable by the time I got home - if fact the whole set up was still good for more. The tall screen kept the buffeting to a minimum, and it really was lounge chair comfort all day. Yet it still proved capable of carving up some twisty mountain roads, rolling away big distances between stops and all while looking like the type of machine that the old ducks say ‘nice bike’ when you do pull into the pub.

More ride reports to come - and the full test will be in an upcoming edition of Heavy Duty Magazine. 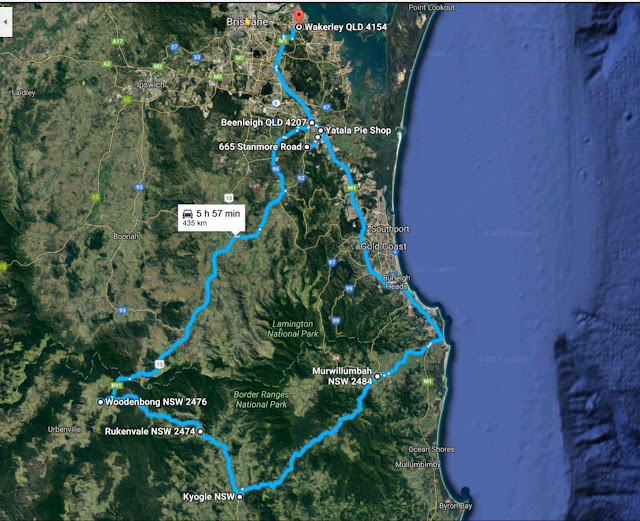