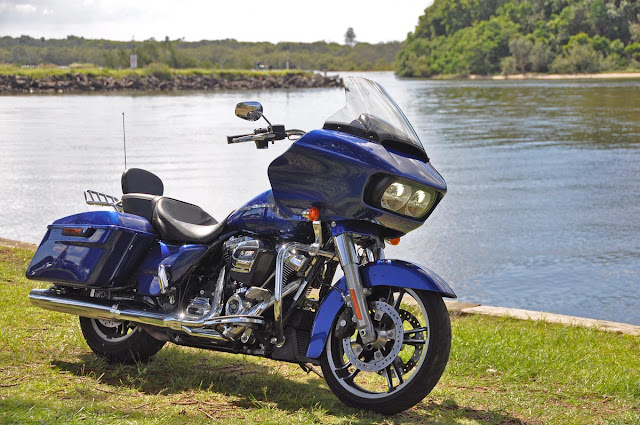 Mates, motorcycles and fish and chips.

Good Friday in Brisbane dawned dry and slightly overcast with light winds. It was a day typical of the last vestiges of the sub-tropical summer.

By the time I was ready to saddle up and head south for a rendezvous with my pal Rowey and his Gold Coast crew the temps were in the early 20’s and the sun was breaking through enough to make the ‘Superior Blue’ paint and chrome on Harley’s magnificent FLTRXS Road Glide absolutely pop.

As I pushed its 388kg (wet) mass out of my garage I was absolutely tongue-ing for this one. I’d been anticipating the ride so hard that I didn’t get much sleep on Thursday night – knowing what Friday would bring.

It didn’t matter - because by the time I had put my gloves on I was fully awake anyway. Beaming. Ride wired.

I had picked the Press Bike up from Morgan & Wacker on Thursday morning and subsequently spent a few hours around Brisbane that afternoon - coming to grips with its road manners, controls and the info-tainment system.

By the time I wheeled southward on Friday morning I had my phone blue-toothed to the excellent sound system and it was pumping out a pre-selected ‘Road Glide Playlist’. There were several route maps plotted into the navigation system as options for later in the day too.

The 8am traffic on the M1 was comparatively light so I dialled in the cruise control, cranked the sound and sat back and enjoyed the custom ‘tall boy’ comfort.

Yep - this one up is set up with Harley’s tall rider seat and windscreen. If any of you other tall guys and girls are reading this – the 'extended reach' saddle for the touring models is absolutely fan-bloody-tastic for the over six-foot crew. I’m 195cm (or 6’5” in the old school) and the Roadie with the tall seat and screen option make this as comfortable as I have been on ANY motorcycle. If you’re tall you have got to gets you one of these. It’s as good as the ‘reduced reach’ options are for the shorter inseams out there.

After a very easy hour of freeway I pulled in to Reedy Creek and met up with the Gold Coast crew. A good mix of Tourers, Softails, Dynas and a couple of Victorys were already lined up. 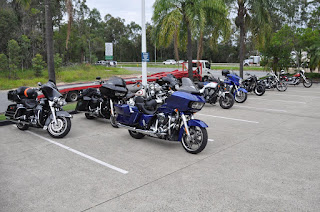 Meet and greets concluded I set about giving the Roadie a bit more rear pre-load. The back felt like it was dragging a little on the rougher concrete freeway sections on the run down. The new knob adjustment set up and ‘bigger piston’ emulsion rear suspension is so much easier than fiddling around with a pump and air adjustment on the older models. It’s now just a matter of undoing the left hand pannier – now held on with easy ratchet-type thumbscrews - and dialing up – or down – the preload knob. The whole process took a couple of minutes.

From Reedy Creek we headed north-west, up the hill to Advancetown, before wheeling south and following the sweeping corners around the Hinze Dam – and where I was starting to really fall in lust with the Roadie.

Maximum comfort, virtually no buffeting from the tall screen and triple vent fairing, gorgeous sound system pumping, and road manners that made it so easy to really relax and take it all in.

With the rear suspension properly dialled in it made the big Showa front forks with their dual valve bendy bits perform even better. The bike’s stability through some of the dual-apex sweepers around the dam was really confidence inspiring.

Beyond the dam we headed into the Numinbah valley and skirted the beautiful rainforest before making the ascent to the Queensland/NSW border. 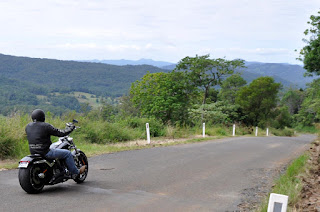 The further south through the valley we travelled, up and over the border ranges and then through the descent into Murwillumbah was a real eye-opener. The flood damage and destruction from Cyclone Debbie’s aftermath is still very evident. In places the riverbanks are severely eroded, the vegetation destroyed and the roads and bridges are also badly affected.

Landslips and washouts block parts of the road in both directions, potholes abound and in some parts the tarmac has simply washed away. The Road Glide proved to be sure-footed, the handling responsive and the way it changed directions while manoeuvring around the damaged surfaces was very reassuring. Having the weight of the large ‘shark’ fairing mounted on the frame (rather than the batwing’s fork mounted setup) no-doubt helps.

Many of the houses close to the river in Murwillumbah still have large piles of flood-damaged home wares piled up in their front yards awaiting collection.

We re-grouped by the river near the town centre and were all a little shocked by the damage. 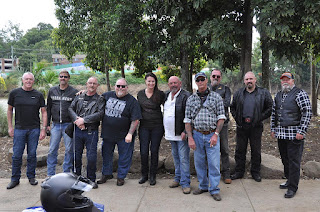 We then headed out towards Burringbar and what could be described as the optimum road for a Road Glide. Fast, smooth sweeping corners that dare you to make the most of its excellent cornering clearance. I gently kissed the boards on the deck twice and was pleasantly surprised as to just how fast a 31 degree lean angle will get you around the right type of corner.

I was still buzzing as we made our way along the Tweed Valley way down to the excellent Seafood Co-op at Brunswick Heads. It was 26 degrees and sunny as we pulled in.

As we expected the fish-o was Good-Friday-type busy, but the crumbed Snapper was well worth the wait and I headed towards the river mouth to see if I could jag a portrait shot of the bike while the rest of the crew kicked back in the shade.

The general consensus was that the roads were too damaged to head homewards through the valley again so those of us with cruise control dialled in, got in staggered formation and steamed back up the M1 freeway northwards from the Ocean Shores turnoff.

The last of the Gold Coast crew took the Helensvale exit and I continued in reasonably light traffic for another hour or so northwards, back to east Brisbane base, stereo at force ten pumping a Bon Jovi and Springsteen mix - and feeling the kind of feeling that you get when a brilliant day’s motorcycling comes together. So good in fact that I took the long way home around Redland Bay and Victoria Point, simply because I was so comfortable on the bike and I wasn’t ready to stop yet. 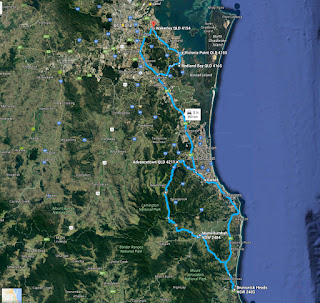 It turned out to be a wonderful 380km first test on the 2017 Road Glide Special. It covered super-slab, twisty back roads, fast sweepers and several sections of treacherous conditions - at town, city and country speeds - and it didn’t put a foot wrong all day.

The M8 engine is so smooth it really reduces fatigue on a long day like today; while it’s so strong and torque-ey it’s just remarkably pleasant to use. The gearbox is superb, - I’ve done several thousand K’s on M8s now and haven’t missed a gear change yet.

The brakes are equally good. I only engaged the rear a few times all day – on the really bad sections of road - because the fronts are so good – and the ABS really adds confidence when all of a sudden the road is strewn with gravel from a wash-out.

After dialling in the rear suspension the handling was also remarkably precise for such a big girl and the overall road manners are very good. The ride is quite firm with 117mm of front suspension travel available and 54mm at the rear, but I didn’t bottom out once or hit the stops at all.

With its outstanding comfort levels, rockin’ stereo, Sat-nav, pretty good luggage capacity (I took three cameras and a spare jacket – just in case it got too hot), excellent paint, fit and finish - and all the other niceties the FLTRXS proved to be a very capable and highly enjoyable motorcycle.