Two weeks with a Road King


My cunning plan successfully convinced Harley-Davidson Australia to lend me their Road King press bike - so I could put together an article for Kiwi Rider Magazine.

A ‘where to ride guide for the motorcyclists among the 400-odd thousand New Zealanders who visit the South-East Queensland region every year’. 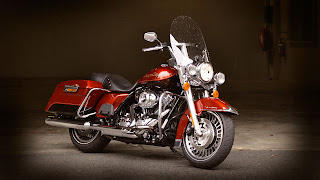 So, for two weeks this beauty graced my garage while my KLR 650 was safely stowed in the shed at my local Harley shop; Morgan and Wacker.

Over the course of my…errr…research I had great rides to the North of our East Brisbane base. To the sunshine coast and the great riding in the hinterland and South to the Gold Coast and its scenic hinterland.

As well as a ton of day rides around the city of Brisbane and the hills to the west of the urban sprawl.

It was great to get re-acquainted with one of my favourite motorcycles.

A number of Road Kings have passed my way in the time I’ve been dribbling on about bikes.

I’ve enjoyed riding them since my first encounter in 2002.

One consistent has been that every year the bikes have gotten just that little bit better, more refined – as you would expect over time. 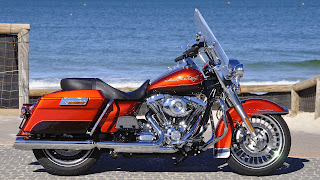 And Harley have had quite a while to get it right.

The First Road Kings appeared in 1994 although Harley states the bike’s Heritage goes all the way back to the original 1965 Electra Glide.

At the heart of the vehicle is the now familiar 103 Cubic Inch Twin Cam engine with integrated oil cooler, it runs push-rod operated valves and self adjusting lifters. The engine is rubber mounted and the six speed gearbox features Harley’s Isolated Drive system for smooth power delivery. Compared to how the engine behaves at idle, there is very little vibration at operating speeds.

It has a bore and stroke of 98.4mm x 111.1mm and is fed by Sequential Port fuel injection and the real please of the engine is it’s maximum torque of 136nm at 3,5900 rpm. It makes for pretty relaxed touring, even with a load.

The standard touring inclusions include hard luggage with pretty good carrying capacity, a saddle that is ‘all day’ good, a big screen, easily removed or replaced depending on the ride, folding footboards for comfort and easy to use electronic cruise control.

I really did fine it very east to spend all day in the saddle across all of the types of riding I put the bike through. 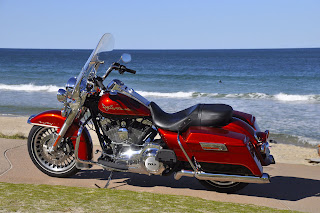 Freeway cruising is a delight. Sit back in comfort and just roll away the miles.

Back roads and twisties are just as pleasant. Cornering clearance is pretty good for a unit with footboards.  76mm of travel is available from the air adjustable rear suspension, so the ride is quite firm, particularly on rough surfaces, but the bike tracks well and holds a line very nicely. The way it torques out of the corners adds to the appeal.

One of the most significant improvements has been in the way the bikes brake.
The Road King has been fitted with twin 4 pot Brembos up front and a single at the rear. They are genuine 2-finger brakes now. Fitted with ABS in the local market as standard. They pull up the 681kg of bike (in running order) pretty well.

Pretty well. That’s sums up how I went with the latest Road King.

Over time it has evolved into a compliant boulevard cruiser, an excellent day rider and it’s capable of handling a much longer adventure - If you could do so – it would happily chug along at 80mph all day.

It’s great looking, beautifully finished and just made me feel good to be on board.
I did over 1000km in the two weeks I had it and loved every minute of it.