The Number plate on this bike gave me the angle for the report.

Harley-Davidson’s VRSCDX Night Rod® Special in Ember Red Sunglo, registration number ACA-00, proved to be a Current Affair on a number of levels.

Not only did I become rather attached to the machine ‘emotionally’ (you want to try giving one back after a two week taster!) But also, this is a very ‘current’ motorcycle.

This is the bike to point at when you encounter those codgers that say ‘Harley only makes old fashioned bikes’ or ‘out-dated technology’.

Nope, this one is thoroughly modern, Bruce.

As current as any of the metric cruisers, in fact, as the price tag would warrant, in some departments it’s ahead.

As I was riding it back to base I immediately noted two improvements over the last couple of VSRC’s I rode. The sound from the Straight Shot exhausts and the smoothness of the EFI - both were now significantly better.

The following two weeks confirmed that the 2013 edition is a bike much more in the performance mould of the 2005 Street Rod.

Yeah, yeah, I know, I’ve been banging on about ‘best Harley ever’ and the Street Rod in the same sentence since the day I rode one. I still to this day wonder why it didn’t sell well enough to continue production. (Seat to peg height is the only constant gripe I’ve read.)

That ‘Street’ is not quite ‘back’ in the guise of the Night Rod Special, the 240 section rear end adds a few provisos to that accord, but it’s a long way down that road, or is that along way down the street or road.

It was the second or third time out on the bike. I was just ‘bedding in’ with it. A perfect night for an excursion – fine, calm and warm, early in the week with little traffic.

I hit one of those downhill, 270 degree, corkscrew, Freeway off-ramps. It presented a reliable surface; proper camber, good visibility and the Night Rod simply nailed it.

Beautifully balanced, steady, neutral steering, the tip of one finger operating some of the nicest Brembo front brakes I have ever used (no bull), all the while cranked and over kissing the near side mirror as the hero peg made the slightest of contacts with the tarmac.

Maybe it was only the power of suggestion that saw a lot of nocturnal activity, but more likely it was the quiet of night in a big city and a vehicle that delights in being taken for a skid in an urban environment.

It’s as happy at low speeds in top gear as it is carving up a Freeway - or just sitting back and rumbling along the waterfront, trying to catch a reflected glimpse of how long and low and how damn cool it looks.

It’s a great looking bike. The paint is superb, the finish, with polished metal highlights mimicked in paint, and the overall line of the machine just worked for me.  A real ‘Skidder’.

That word ‘skid’ is a term I used a lot around the bike.
Not that I locked up those ABS Brembos at all, even though I tried diligently.
I mean who doesn’t like making a back tyre squeal when making ‘an entrance’?
You won’t be pulling any radical stoppies on this one either.

Conversely, next time that bloke at the bar or online gives a sermon on ‘Harley brakes’ point out these ABS stoppers. I can’t call them anything but simply superb.

The Skidder thing comes from the overall ‘lowness’ of the bike. Built so close to the ground it adds to the fun.  It’s narrow enough to squeeze through the traffic and nimble and well balanced enough to make it easy. I even managed a few commuter runs and it dealt with stop start just fine.

Lots of thumbs up from the hot car and big truck crowds at the lights with this one too. ‘Noice bike Mate’.

Away from the lights and pinning the throttle on the Liquid-cooled, Revolution®, 60° V-Twin with Overhead cam and 4 valves per cylinder mill causes things to happen rather quickly.

The official Harley info kit doesn’t specify a maximum horsepower output, but it’s not hard to find an un-official 120 ponies quoted in ‘sources’. Pushing a dry weight of 289kg - spool it up and it goes.

H-D does claim 111nm of torque @ 7,250 rpm. I only saw that sort of number on the rev counter occasionally. If you are pulling seven grand on this thing regularly then you probably don’t have a whole lot of demerit points left in the bank. This is a genuine performance cruiser right out of the box.

It has a great looking rear end. I tried several time to capture in photographs just how rakish the rear quarter of the bike is - and failed. It’s just one of those jobs that looks better in the flesh. 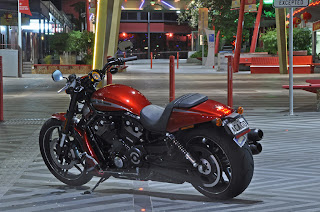 We all know it’s a big part of the power cruiser look. The 240/40R-18 Michelin Scorcher Tyre is fat. In the dry and on good surfaces it surprised me. The balance of the whole unit on the aforementioned off-ramp was notable. There was little need to ride ‘around’ the back wheel.

Introduce a bit of moisture or some debris on the road and it’s a typical 240 section. You wouldn’t call it skittish, just not as sure footed as a 180 would be. The trade off is in the looks and how it makes you feel when you walk in the shed and cast a gaze at it. It’s very easy on the eye all round.

Co-pilot glanced at the standard pillion accommodation and kept walking. This one, in standard form anyway, was a solo pleasure.

I did the standard local day ride up to Mt Glorious and to the Dams and enjoyed all that too. On the open road it’s a firm ride, typical of the breed. There are 74mm of travel available from the preload adjustable rear shocks and the cornering clearance is good for a cruiser – but like the suspension - still a cruiser.

Giving it the business on exits is a real hoot.

The front end is very tidy. The USD forks add something of a sports look around the split 5-spoke wheel and twin rotors. The 34 degree rake is all cruiser though and the front mudguard doesn’t work very well.  It looks great and is entirely in style, but containing wheel spray is not its strong point.

Where the bikes real element is, is pinging down the main road and the City Streets and taking back some of that midnight hour.

I cruised a ton of Freeway and became something of a creature of the Brisbane night, riding around searching for a photo opportunity. And loved it.

I didn’t use the entire range of performance tech on the bike. It has a slipper clutch (apparently). I didn’t feel it come into play. It has a 5 Speed (Hooray!) gearbox, clutch and the whole drivetrain in fact, did exactly what I thought it should do throughout. A joy to operate. 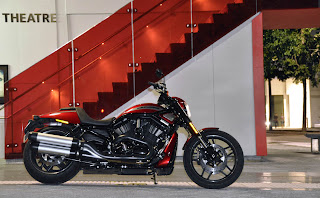 I did use quite a few tank-fulls of the 18.9ltr under seat fuel cell. Harley claims 6.3ltrs per 100km. Unfortunately I’m not built like their test rider – Twiggy – and didn’t quite get those figures. It was also because I might actually have gone looking for that maximum torque on more than one occasion.

I found the bike surprisingly comfortable and big-man friendly. Particularly in light of the 675mm seat height. The taller gentleman will find that with the wider handlebars than those fitted on older models make for quite a roomy perch.

The shorter of stature will find the 675mm pretty easy to live with too.

Easy to live with.

That’s a great way to sum up the Night Rod Special. It was even pretty easy to keep clean for a Harley.

If you are in the market for a power cruiser, there’s a very tasty American option too.

It’s a great looking, versatile, modern bike that proved very easy on the eye and very easy to live with.

Unlike the TV show.