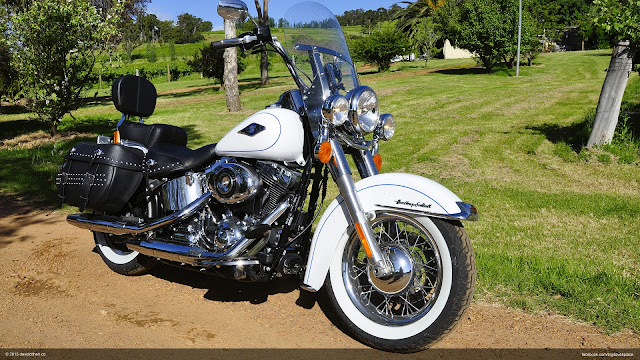 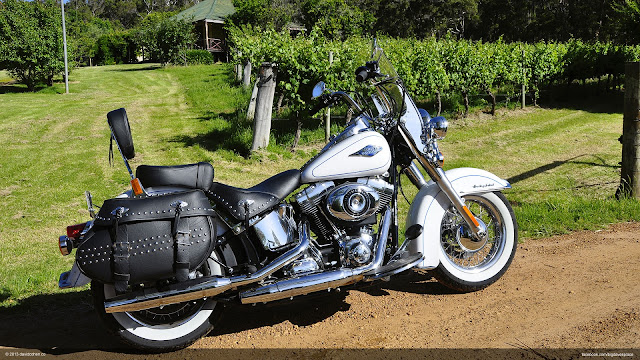 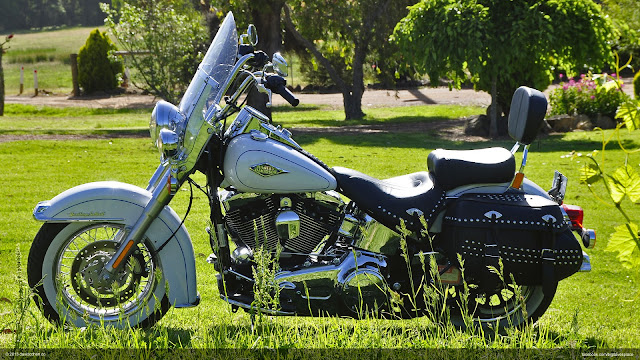 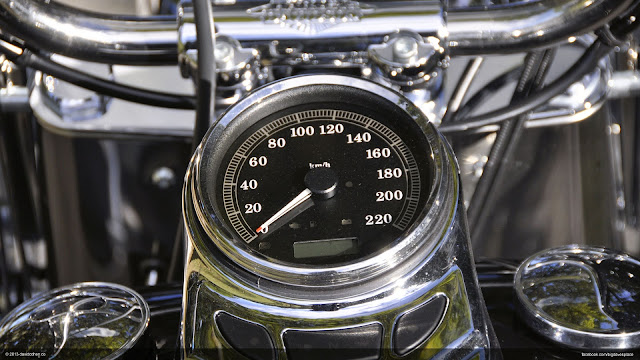 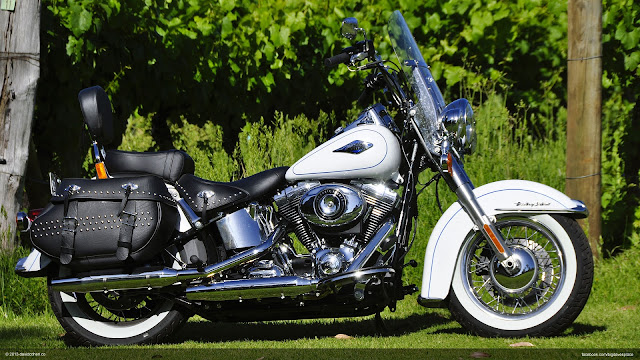 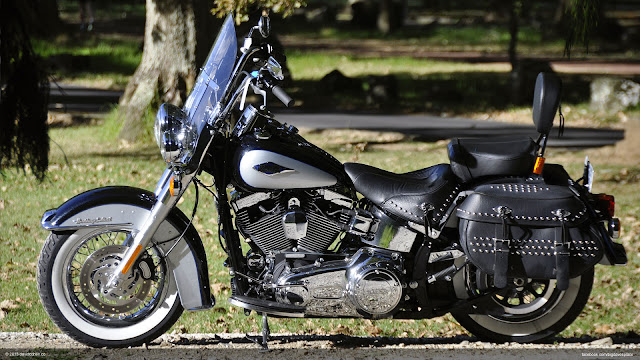 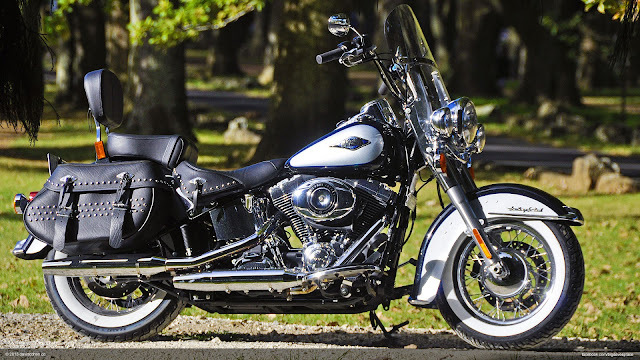 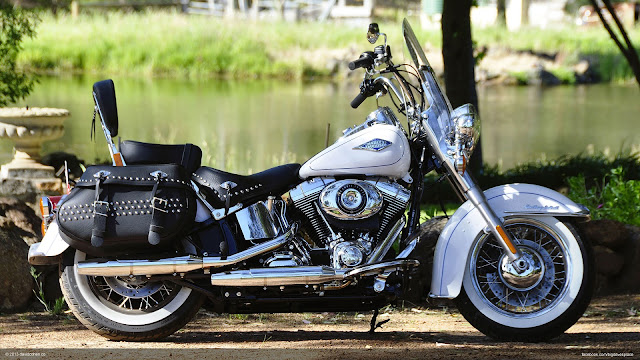 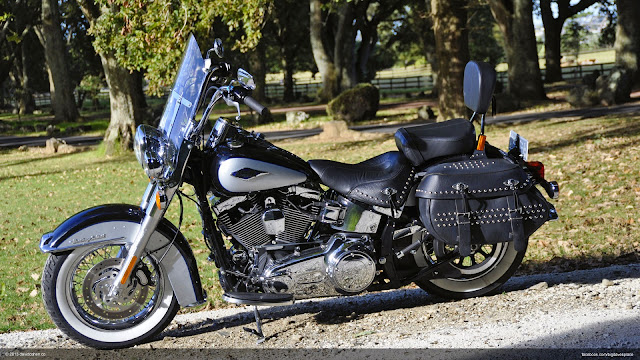 It’s a mouthful: The Harley-Davidson FLSTC Heritage Softail® Classic - as the manufacturer would have it.

You can understand why Joe Public just calls it ‘a Harley’. And this is probably the bike Joe the non-biker imagines when he thinks of a Harley.

It’s the archetypal modern Hog. Depending on which Joe you talk to 4it could represent anything from ‘Easy Rider’ to ‘The Wild HOGS’.

Like many of the modern retros to the non-cognoscenti this bike could be 30 years old - at first glance anyway. 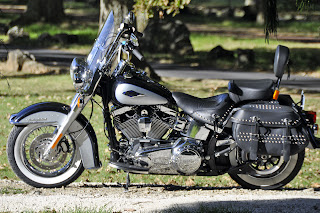 This one was mine for the duration of the NZ HOG Rally and I used every opportunity to ride the wheels off it. Not abuse it, although the unit was somewhat looser after being used to its potential getting ahead of the Thunder Ride.

Obviously ‘flogging’ is not the job this tool was made for. This is a cruiser of the first order, although it’s still one you can punt along on the open road quite satisfactorily as our recent tour on a similar bike in Western Australian proved.

The 103 cube engine is universally capable across the H-D range. To maintain pace though the twisties on a Classic requires a lot (a LOT) of body English - because the ground clearance it typical of a large cruiser with footboards. If that’s the sort of riding you are looking to do regularly this isn’t your bike anyway.

This baby is for a pleasure ride and it’s a pleasure to ride. (See what I did there.)

When I had some Rally ‘down time’ I went and visited the crew. I got the usual ‘chrome barge’ jibes - although I knew even they were grudgingly acknowledging that this is a great looking motorcycle. I was even allowed to park it in prime spot outside Douglas’ Newmarket hangout. 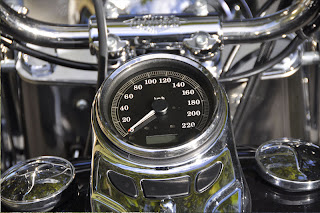 Me? I just saw 326kg of chromed magnificence. A cultural icon perfect for the task at hand: 3 days of big city cruising with an occasional country jaunt and the ability to carry a decent cargo of camera and video gear. And do it all in comfort, with no shortage of style.

There was more than one ‘Oh yes, she is mine’ moment. Every chance I got.

A brief scan of the specs shows no major change from the previous year’s models. Although, as they have done every year since I’ve been testing them, it ‘feels’ like 1690cc Air-cooled, Twin Cam 103B™ engine is just a little bit sweeter and has a bit more low down torque than the previous model.

The rigid-mounted, counter-balanced power plant and six speed gearbox have the ability to trundle along quite happily at 55-60kph in top gear. An ability that would surprise someone who is used to riding an older big block.

The main difference between Softails and other Harley classes remains the rigid looking rear end with hidden horizontal shock and the solid mounted, counterbalanced engine, rather than the rubber mounted powerplant in the Dyna, Touring rigs and Sportsters.

I jumped on the Heritage virtually directly after a few weeks on a new Night Rod, and that made for some inetesting comparisons. The brakes on the softail were good, without being killer, like they are on the Night Rod, I mean killer/awesome.

Still the difference between the two ststems is mainly whether they require one or two fingers to operate. They worked well enough thanks to a hard braking test supplied by a dufus taxi drive pulling a U-turn on Khyber Pass Rd.

Under the retro skin the bike has a heap of up to date tech. It ran smoothly in Auckland traffic snarls and the EFI didn’t bumble once, while the comfort of the ride was outstanding throughout. The clutch didn’t get sticky even though it was getting pretty hot on a near-stationary Newmarket flyover.

Harley’s are my favourite controls now – the self-cancelling indicators with a button on either switch block spoil me when I jump back on a bike with standard toggle switch. Only gripe is I find it too easy to turn the hazard flashers on.
Rather petty really.

The screen is easily removed and it’s makes quite a difference to the city or open road feel of the bike. I was comfortable either way. Co-pilot rates the standard Heritage pillion accommodations as amongst the best ever.

If you want a beautiful looking pleasure ride that works well for two. A pride and joy, and believe me keeping one of these units looking as good as they can is a hobby in itself, then this lump of heritage style comes with a lot of added extras.

The whole HOG in fact.