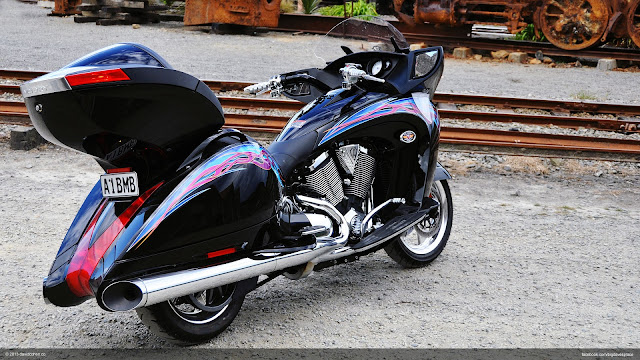 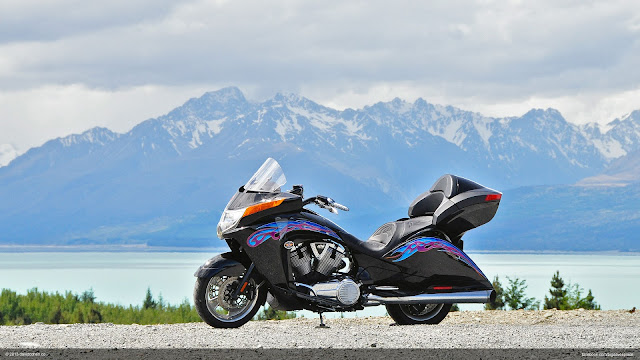 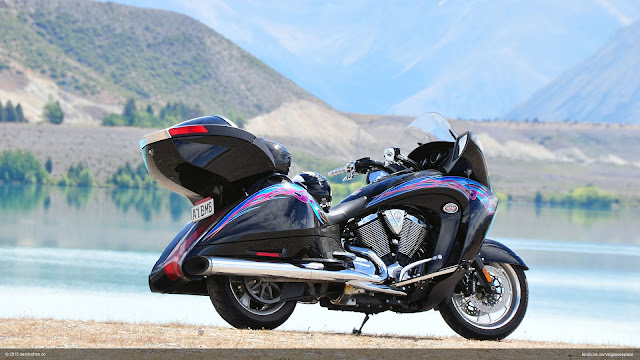 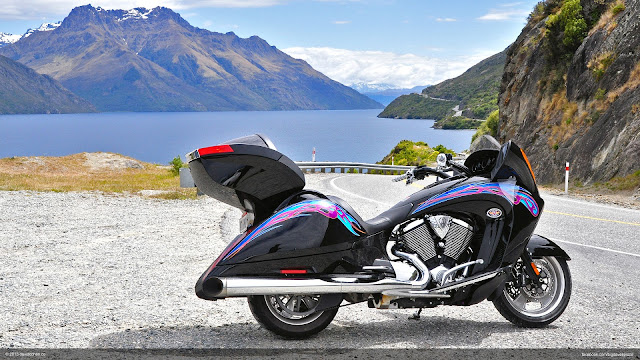 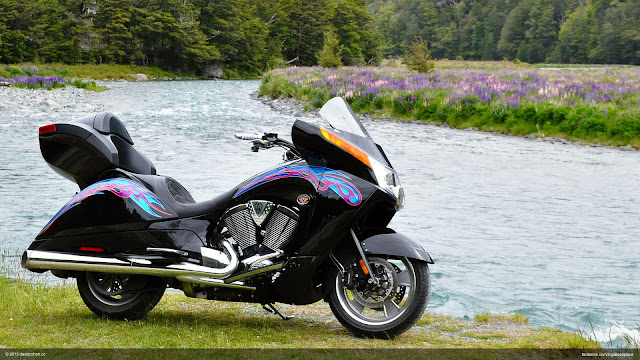 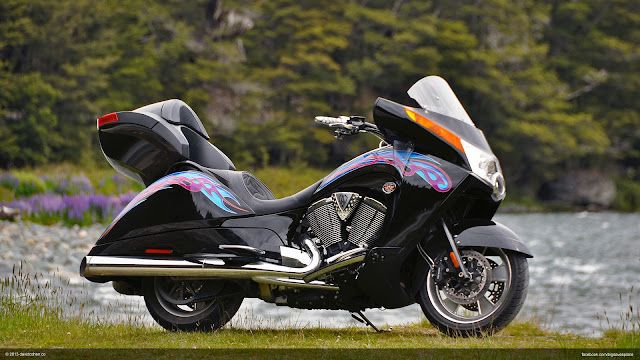 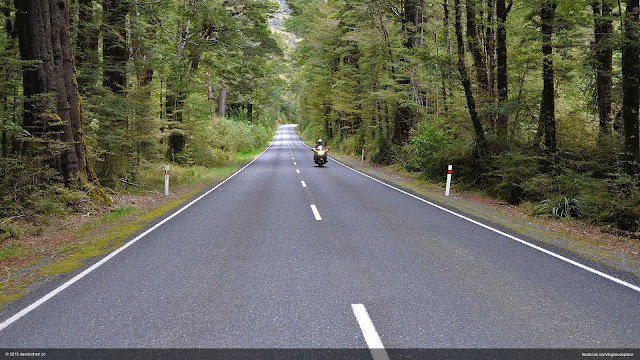 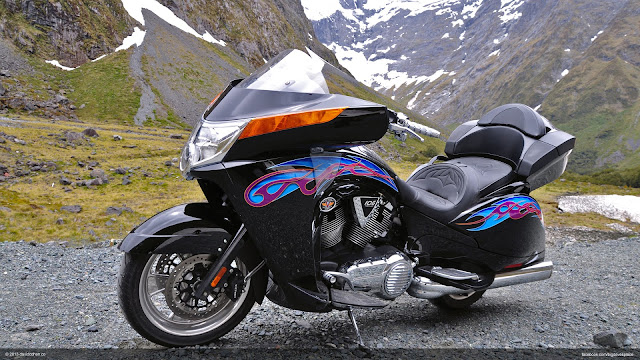 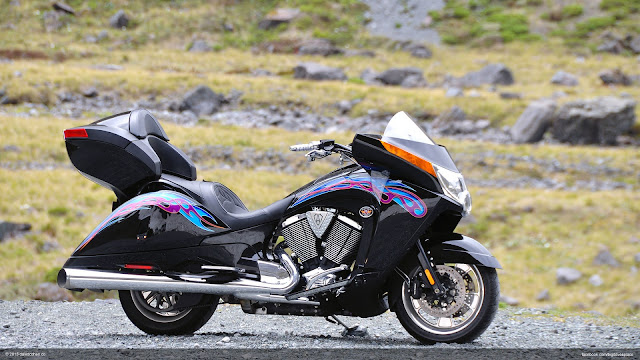 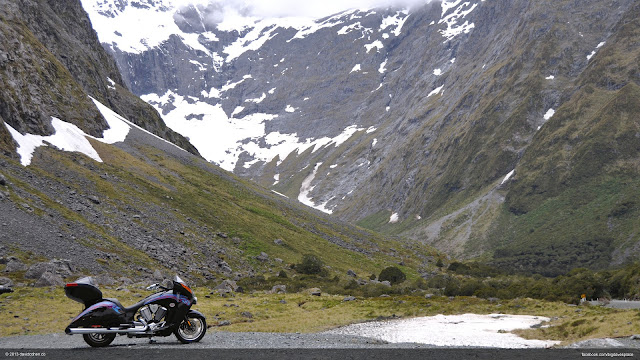 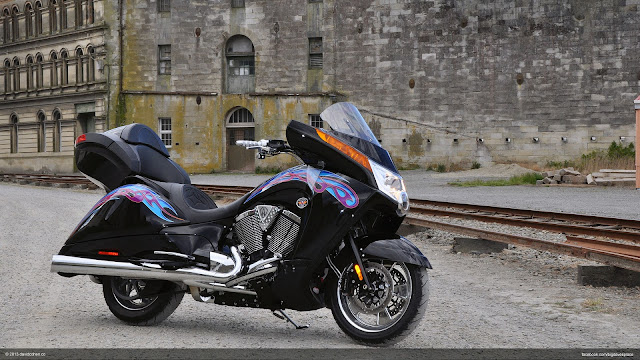 We featured a Vision on the cover on the November 2008 Edition of KR and the capability of the bike impressed us then, so when Victory gave me an opportunity to use their Arlen Ness Custom Vision, #164 of 200, on a serious tour test around Southland, I jumped at the chance.

Arlen Ness is regarded as a Pioneer of custom bike building. His works are famous amongst the chopper fraternity and some of his bikes are quite legendary.

The machine he created is one that certainly polarises opinions.

Whatever you think of the styling, after a very thorough test, in occasionally difficult and trying conditions, we can attest to its capability as a very accomplished Grand Tourer – that it also works as a very cool cruiser.

This is a wonderful motorcycle to spend an extended tour on.

It starts with room to move. It’s large.

(Another blindingly brilliant BD insight!) It weighs in excess of 365kg and has a wheelbase of 1670mm. It’s also a contender for the ‘most bodywork on a motorcycle ever’ award, even allowing for the fact the engine is intentionally left uncovered.

The seat is low, cruiser low, 673mm, but it is very plush and the foot accommodation is probably the best on any bike for comfort. The long footboards, combined with the tip-over protection outriggers, offer a variety of leg positions that make it very much like sitting in a favourite lounge chair – even for a BD size unit.

The Passenger is also brilliantly catered for, although the Top Box is an additional extra on the Ness Model. Also missing from the Touring model are the heated grips (replaced with bling) and the heated seat (replaced with hand stitched leather bling).

As it turned out on this trip they weren’t really missed either. The bodywork and electric screen did such a good job of insulating us from the elements.

We copped some extreme conditions on the run down to Invercargill. 140kph cross winds, detours onto dirt roads in heavy rain and plummeting temperatures.

Most of which we were quite nicely protected from, inside the bubble the whole setup creates.

The stability of the machine in the conditions actually surprised me.

‘You might have to tack a bit’ Gary said when we were discussing the trip into the forecast gales. It was a pretty fair description of the ensuing action.

The guys on the lighter, naked bikes were having a much rougher time of it.

The only time I’ve noticed any irregularity in the Vision aerodynamics in on the Freeway following a large vehicle – it transmits some buffeting, but in extreme touring conditions I’d have to give it an A+. It is quite effective at keeping lower half dry in moderate rain too.

For all its size it’s still fun to ride.

We logged just on 2,000km for the tour and I didn’t scrape anything or touch down anywhere all trip. It has good ground enough clearance that it comfortably deals with the 75’s at 100kph.

The 1731cc (Badged 106 cubic inch), 4 Stroke, SOHC 4-valve engine has self adjusting valves and hydraulic lifters and it purrs along nicely. It’s fed by closed loop EFI system and it develops 109ftlbs of torque at and 92 usable horsepower close to its 5,500rpm redline. It has good overtaking pull and is remarkably smooth in cruise mode.

The range on a tankfull varied with how sportily I pushed the bike along, but a return of 16.9km/l was most consistently displayed on the digital trip computer nestled between the analogue dials. The LCD has a variety of trip computer functions.

Stopping is taken care of by a set of 300mm brakes. Twin floating discs with 3 piston callipers up front and one 2-piston unit aft. They are linked, provided good feel with a light touch and were confidence inspiring, even when doing low speed manoeuvres on the gravel.

They are sitting in the middle of some beautiful Custom Billet Wheels that sport a 130 front and 180 section rear tyre.

The clutch is equally light and when I looked at all the riding pics co-pilot took, all I have is two fingers on the levers in any of them.

The ease of control (for a bike so large) and road manners of the bike were a pleasure to live with.

2 people getting on and off the bike, past the large top box, in touring gear, was the only inconvenience, but that’s full dressers.

When conditions improved I wound the screen down, folded in the side deflectors and sat back and watched it all roll past in wonderful comfort.

The Luggage is often maligned because it ‘looks’ like it should hold more than it does, but we fitted all our gear, cameras, chargers, 2 dozen KR hats, bike brochures, stickers and co-pilots shoes on board.

The top box easily accommodates 2 full-face helmets. Which is handy, because you’re never alone with this bike.

The stream of people who stop and ask about it is constant. Japanese tourists were queuing up to have their picture taken with the bike. Everyone had an opinion.

We tagged the tour ‘You’re never alone with a Nessie’ on the back of it. It’s quite a celebrity machine, from its diamond cut cylinders to the 4 speaker stereo system and effective cruise control, it sure draws a crowd.

Don’t let the custom looks and deportment fool you, because it’s also a competent Gran Tourer, it dealt with some miserable conditions admirably, and it doubles as a very classy cruiser.

Long may it roam.